Examination of a blood smear is an integral part of a hemogram. Blood smear analysis allows quantitation of the different types of leukocytes (called the differential count), estimation of the platelet count, and detection of morphologic abnormalities that may be indicators of pathophysiologic processes. In some instances, a diagnosis may be evident. Deriving full value from blood smear examination requires a well-prepared, well-stained blood smear and some basic skills in the methods of assessment. For more information on how to make a good blood smear, please also refer to related links below. Though some automated hematology analyzers provide a differential count as part of their output, this does not fully take the place of a microscopic exam by an experienced observer.

Components of a blood smear

A well made blood smear consists of several areas: The feathered edge, the monolayer, and the body and base of the smear. All parts of the smear should be examined, however the monolayer is the area where the cells are examined in close detail and differential cell counts performed. Note that in a severely leukopenic animal, you will not find enough leukocytes within the monolayer to perform a 100 cell differential leukocyte count and you may have to use the entire smear and may not be able to count 100 leukocytes. 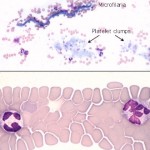 Feathered edge of a blood smear

This is the end of the blood smear and should be completely present and fully stained (a smear that is “too long” will lack a feathered edge). This should be the first part of the smear that is examined at low power to detect platelet clumps and microfilaria, but should be avoided when evaluating blood cells at higher power. Abnormally large cells of potential diagnostic importance also tend to be drawn to the end of the smear. 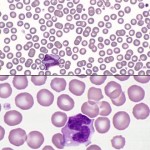 Example of a monolayer area on a blood smear

This is usually a distance of one 10x field behind the feathered edge and is the optimal area for examination of cells, because it dries quickly and cells are well spread (not overlapping) and not disrupted. Red blood cells are separated or barely touching, with little overlapping. In any species but the horse, rouleaux, consisting of stacks of 3 or more red cells, in this area is an abnormality suggestive of increased globulin concentration, which is common in animals with inflammatory disorders (and also seen in animals with neoplasms of B cells, which can produce abnormal immunoglobulins). White blood cells should also be uniformly distributed in this section. 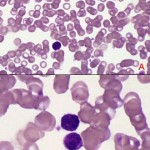 Body and base of the smear

These areas are usually too thick to evaluate cells under higher power. The thick area of a smear dries too slowly for leukocytes to spread out. The white cells here are shrunken and appear much smaller than in the quickly dried areas – individual leukocytes can be difficult to identify in this area and red blood cell changes are hard to appreciate. This area of the smear is usually scanned at low power to identify low numbers of potentially diagnostic cells (e.g. blasts in a leukemia), infectious agents (e.g. trypanosomes, microfilaria), and certain RBC changes (hypochromasia, agglutinates).

A systematic approach is important so that all the available information is derived from each smear examined. This is our recommended protocol for blood smear examination: Scan the smear at low magnification, then use a higher magnification to perform a differential leukocyte count, enumerate nucleated RBC, estimate a platelet count, and evaluate red blood cell (RBC), white blood cell (WBC) and platelet morphologic features. 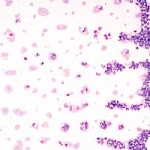 Low magnification (100x) view of the feathered edge. Such poor distribution of leukocytes adversely affects the accuracy of the differential count

A WBC count can be estimated (with practice) when scanning across the smear (feathered edge through monolayer through body of smear).

Once the optimal area has been located, switch to a higher magnification (50-100 x objective) 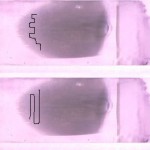