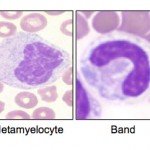 Immature neutrophils in a dog

The most common cause of a left shift is inflammation, because inflammatory cytokines stimulate both neutrophil production and release of mature and immature forms from the bone marrow. Toxic change usually (but does not always) accompanies a left shift (toxic change may not be seen if there is a mild left shift or if there is only release of immature cells from marrow without accelerated maturation). However, immature neutrophils can also be released prematurely in bone marrow disorders, such as leukemia or severe marrow injury (immature neutrophils are usually not toxic in this setting), or in response to cytokines released or stimulated by neoplasms (e.g. lymphoma), which induces neutrophil granulopoiesis and release of mature and immature neutrophils (this is called a paraneoplastic response and is caused by cytokines such as G-CSF, when it involves neutrophils, or GM-CSF, when both neutrophil and monocyte production is stimulated). A left shift can also be seen with hematopoietic neoplasms, such as neutrophilic variants of acute and chronic myeloid leukemia (the latter is very rare), where it indicates abnormal production and release of neoplastic hematopoietic cells. 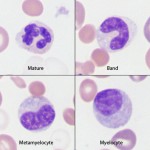 Immature neutrophils in a dog

Immature neutrophils are classified based on their stage of maturation. The earliest identifiable neutrophil precursor is a myelocyte, which differentiates into a metamyelocyte, then a band neutrophil, and finally to a mature segmented neutrophil. Only the myelocyte is capable of division – all the more mature stages (metamyelocyte, band, segmented neutrophil) are incapable of division (post-mitotic). The primary criterion for differentiating immature neutrophils from each other is the shape of their nucleus, which starts to indent or constrict as the cell matures. A myelocyte has a round nucleus, a metamyelocyte has an indented or kidney-bean shaped nucleus and a band has a horse-shoe or parallel-sided shaped nucleus.

Immature neutrophils must be distinguished from monocytes, particularly when there is evidence of toxic change in the neutrophils. This can be difficult to do, but is usually accomplished by evaluating the entire cell (nuclear shape, nuclear location within cell, nuclear chromatin and cytoplasmic features). Immature neutrophils tend to show features of toxicity (cytoplasmic basophilia, Dohle bodies, cytoplasmic vacuolation), have more clumped chromatin than monocytes and when they are metamyelocyte or myelocyte forms, the nucleus is eccentric. Cytoplasmic borders, when they abut adjacent red blood cells tend to have a light rim. In contrast, monocytes have fatter nuclei which are more pleomorphic and tend to be more centrally located, they are somewhat larger than immature neutrophils and have a more uniformly colored blue-gray cytoplasm, which may contain small discrete-margined vacuoles. Streaky irregularity to the cytoplasm, which signifies toxic change in neutrophils, is generally not seen in monocytes. In addition, when monocytes (or lymphocytes) abut adjacent red blood cells, the rim of cytoplasm is dark. Refer to the hematology atlas for images showing the difference between monocytes and immature neutrophils.