A common and important morphologic abnormality of neutrophils is so-called “toxic change“. Contrary to what has been written in many books, toxic change in neutrophils is not necessarily associated with “toxemia”. The term derives from the fact that these abnormalities were first noticed in human patients with gram negative sepsis and endotoxemia. However, toxic change in neutrophils do not reflect a “toxic effect” of bacteria on neutrophils but are morphologic abnormalities acquired during maturation under conditions that intensely stimulate neutrophil production and shorten the maturation time in the bone marrow. This accelerated maturation occurs secondary to cytokine stimulation, which is usually in reponse to inflammation. Animals recovering from bone marrow injury or who are administered hematopoietic cytokines (e.g. granulocyte-colony stimulating factor or G-CSF) can also show accelerated maturation in neutrophils or toxic change. On the standard hemogram, the presence of toxic change is reported under the WBC examination section at Cornell University and is subjectively graded as mild, moderate and marked (others may use a subjective numerical grading of 1+ to 3 or 4+).

Most of the toxic changes reflect asynchrony of maturation between the nucleus and cytoplasm. During normal granulocytopoiesis, the lengthening and pinching of the nucleus are coordinated with progressive condensation of the chromatin and loss of cytoplasmic protein synthetic machinery (RNA in the form of ribosomes and rough endoplasmic reticulum – which imparts a blue color to the cytoplasm with hematologic stains). With accelerated maturation, nuclear divisions may be skipped (resulting in larger cells than normal) and the cells retain immature features, including increased amounts of rough endoplasmic reticulum or ribosomes in the cytoplasm and lighter chromatin than normal. Specific granules may be less visible than in normally mature cells and, in some species, primary granules (normally inapparent in neutrophils) retain their affinity for the stains used for peripheral blood. The cells can also have frothy or vacuolated cytoplasm. 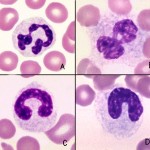 In a blood smear there are five main features of toxic change: 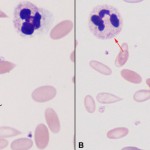 Toxic granulation in a camelid with enteritis.

Because toxic change usually indicates an inflammatory leukogram, it frequently accompanies a left shift, i.e. presence of immature neutrophils (bands, metamyelocytes, myelocytes), in animals. However, some animals can have a left shift without toxic change (e.g. some dogs with immune-mediated hemolytic anemia) and toxic change can be present (albeit rarely) in animals without a left shift. In the latter circumstances, we look for reasons other than inflammation for the toxic change (e.g. marrow dysplasia, storage artifact). The degree of toxic change can also be a helpful finding. The more severe the toxic change, the more intense the inflammatory stimulus. In one prospective study of 105 horses presenting to an emergency clinic with medical or surgical colic, the presence of bands and moderate to severe toxic change were associated with decreased survival (Lambert et al 2016).

Note that a “false” left shift and toxic change (specifically, the emergence of Döhle bodies or so-called “Döhle-like bodies”) can occur in stored blood, with the changes accelerated at higher storage temperatures. A study detailing the changes showed that Döhle bodies became evident in 1/8 samples at 4 hours (present in all 8 at 24 hours) stored at room temperature, 25% of 8 samples (4/8) at 8 hours and 71% of 7 samples (5/7) at 24 hours if stored on ice, and only a quarter of 8 samples stored at 4°C (Bea-Guadreault and Grimes 2019), reinforcing how lower temperatures are always better for storage of EDTA-anticoagulated blood for hemograms and emphasizing the need for submission of blood smears with any tubes that are stored for any length of time. The latter study did not evaluate “pseudo-band” formation, but band-like neutrophils were present in the images at 8 hours in samples stored on ice and at 4C (the article did not state if any animal had a left shift before storage) and vacuolation of the cytoplasm was also seen at 4 hours in samples stored on ice and at room temperature.