Hematopoietic stem cells (HSC) initially develop in blood islands within the yolk sac of the embryo, then move to the fetal liver.  Late in gestation, hematopoiesis shifts to the bone marrow.  Immediately after birth, hematopoiesis occurs in many bones, but by adulthood hematopoiesis is primarily restricted to flat bones and epiphyseal regions of some long bones, with the central or metaphyseal region consisting of fat. However, in periods of increased demand, hematopoiesis can expand within the bone compartment and also occur in extramedullary sites such as the spleen, liver, and other tissues (extramedullary hematopoiesis).

Self-renewing, multipotent HSCs are the source of all blood cells. The differentiation of HSCs into the various lineages (erythrocytes, myeloid cells, platelets and lymphocytes) is driven by cytokines, adhesive interactions between stromal cells and HSCs, and specific transcription factors. The early models of hematopoiesis were depicted by a tree-like branching system, in which HSC split off early into separate lymphoid and myeloid compartments. Although the latter concept helps with understanding different types of leukemia, tracking cell fate in mouse models has led to newer concepts of hematopoiesis, such as the cloud model (Velten et al 2017), which propose more common pathways of lymphoid and myeloid differentiation (e.g. T cells share more commonality with monocyte precursors than B cells), cross-lineage differentiation and continuous reprogramming of cells to different pathways. 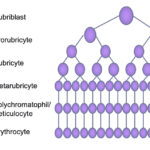 Erythropoiesis is controlled by erythropoietin (produced primarily in the kidney) and occurs in the vascular niche of the marrow (closest to the marrow sinusoids). Erythropoiesis occurs in close association with macrophages, which provide important adhesive and soluble cues, as well as iron, that facilitates erythropoiesis and hemoglobin synthesis. The earliest erythroid progenitor is the blast forming unit-erythroid (BFU-E), followed by the colony forming unit-erythroid (CFU-E). These give rise to recognizable erythroid precursors ranging from the least mature rubriblast to prorubricytes, basophilic rubricytes, metarubricytes, polychromatophils and, finally, the most mature RBCs, which are sacs of hemoglobin. As the cells divide, they become smaller and more abundant. As they acquire more and more hemoglobin, they lose protein synthetic machinery and their nucleus (which is phagocytized by their supporting macrophage). Maturation is pyramidal, with more mature cells dominating in a bone marrow aspirate.

Granulopoiesis is the production of granulocytes (neutrophils, eosinophils, and basophils) from the HSC, which differentiate into myeloblasts, then progranulocytes (common progenitor for all granulocytes). This occurs in the osteoblastic niche. In general, as granulocytes mature from myeloblasts, they become smaller and acquire nuclear lobulation and specific secondary cytoplasmic granules, which characterizes the type of granulocyte (pink granules for neutrophils, orange granules for eosinophils and purple or lavender granules for basophils). With each successive division, the cells become more abundant such that development in marrow is pyramidal, with the least mature cell (myeloblast) being least abundant and the most mature cells (band and segmented forms) being the most abundant. They also lose mitotic capability at the myelocyte stage (metamyelocyte, band and segmented forms are called “post-mitotic” cells). In terms of evaluating the bone marrow, the neutrophil is the most important granulocyte, because it is a short-lived cell. The earliest identifiable neutrophil-specific precursor is the neutrophilic myelocyte, which have round eccentric nuclei and faint pink cytoplasmic granules. The myelocyte differentiates into a metamyelocyte then into a band neutrophil and finally a mature segmented cell. These stages are differentiated by the shape of the nucleus (round in the myelocyte, kidney bean-shaped in the metamyelocyte and horseshoe-shaped in the band neutrophil) and the location of the nucleus within the cell (more eccentric in myelocytes and metamyelocytes to central in segmented neutrophils). Production of neutrophils is controlled under steady state conditions by stem cell factor, interleukin-3, granulocyte-colony stimulating factor (G-CSF) and granulocyte-monocyte-colony stimulating factor (GM-CSF). These cytokines, plus inflammatory cytokines such as interleukin-1 and tumor necrosis factor-a, also modulate neutrophilopoiesis in inflammatory states.

Monocytes are produced from monoblasts in the osteoblastic niche. Monoblasts can only be differentiated from myeloblasts by immunophenotyping or cytochemical stains (e.g. ALP in dogs). The first recognizable monocyte is the promonocyte, which is a larger cell with a more irregular nucleus and bluer cytoplasm than a myelocyte. This then differentiates into a monocyte. Monocytopoiesis is controlled by monocyte-colony stimulating factor and the same general cytokines as neutrophilopoiesis, with the exception of G-CSF. For images of promonocytes, see the leukemia gallery in the bone marrow cytology album.

Thrombopoiesis is controlled by thrombopoietin (mostly produced in the liver) and occurs in the vascular niche, adjacent to vascular sinusoids.  The earliest committed precursor is the megakaryoblast, which resembles myeloblasts or monoblasts, and can only be differentiated by expression of lineage-associated markers, such as CD61 or von Willebrand factor. The earliest recognizable form in marrow aspirates are promegakaryocytes or immature megakaryocytes, which have deep blue cytoplasm, high nuclear to cytoplasmic ratios, and usually appear binucleated or multinucleated. However, megakaryocytes actually undergo “endomitosis” (nuclear division without cellular division) and are polyploid and not multinucleated. As they mature, they become larger, acquiring more cytoplasm, which becomes lighter and purple, and also develop platelet-associated pink cytoplasmic granules (for images, see the cytologic evaluation page and bone marrow album in the atlas). Mature megakaryocytes are very large cells (about 50-200 µm) with abundant pinkish granular cytoplasm and lobulated nuclei. Platelets are formed from fragmentation of cytoplasmic protuberances that extend through the sinusoid endothelium into the circulation.

Other cells that are produced from the HSC are lymphocytes, mast cells, osteoclasts, macrophages, and dendritic cells (with the latter three cell types being produced by a common monocyte/dendritic precursor). Lymphocytes leave the marrow early as precursors to populate and differentiate in extramedullary tissues (T cells in the thymus and B cells in peripheral lymphoid tissue or compartments). They then likely return to the bone marrow in low numbers to act as sentinel or local immune cells. Plasma cells are terminally differentiated B cells that are produced in extramedullary lymphoid compartments, but can home to the marrow due to production of supportive cytokines, such as interleukin-6 by marrow stromal cells. Low numbers of lymphocytes (usually mixed B and T cells) and plasma cells are seen in the bone marrow in all species. Hematogones, or groups of lymphoid precursors, can be seen, most commonly in aspirates of the bone marrow from horses. Other cell types, such as adipocytes, fibroblasts, pericytes, and osteoblasts, are produced from bone marrow mesenchymal stem cells under the influence of differentiating cytokines and transcription factors.