Bone marrow aspirate evaluation should always be performed by a clinical pathologist.  However, you should know what to expect from a bone marrow report and how the findings are interpreted.  Bone marrow evaluation includes an assessment of the following: An estimate of cellularity, evaluation of all hematopoietic lineages (including an M:E ratio), estimation of iron stores, and an assessment of other cell types. It is also imperative that the bone marrow findings are interpreted in context of a contemporaneous hemogram, so always submit blood for a hemogram, recent hemogram results (last 24-48 hours and sequential data, if available) or, at the very least, a good quality blood smear. Otherwise marrow interpretation will be quite limited. 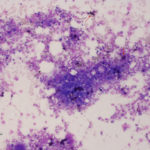 Cellularity of marrow is best assessed on a good quality core biopsy, but can usually be estimated on aspirated samples as long as there are plenty of bone marrow particles in the sample. If there are only a few bone marrow particles on the slide, it may indicate either inadequate sampling or the presence of a disease that prevents aspiration (e.g. myelofibrosis). The latter should be suspected if you are well placed in the marrow but attempts at aspiration yield little or are unsuccessful. In the latter cases, core biopsy will be needed. Evaluation of cellularity aids in determination of whether cell lines are increased or decreased within the marrow.  Only nucleated cells are included in assessment of cellularity (not mature RBCs or reticulocytes, which could just indicate blood in the sample) and for normal marrow, is dominated by myeloid and erythroid precursors (megakaryocytes do not contribute much to cellularity). Cellularity can be estimated as the ratio of hematopoietic cells to fat and should be interpreted with respect to the age of the patient. Younger animals have higher cellularity (>75:25 hematopoietic cell:fat ratio) with older animals having lower cellularity (50:50 or <50:50). Cellularity will also depend on the region of marrow sampled with the aspirate. If the aspirate collected marrow closer to the diaphysis and less in the metaphyseal region, there may be less cellularity as a direct consequence of the region sampled (the diaphysis contains less active marrow). For this reason, cellularity can vary from spicule to spicule and slide to slide, resulting in an overall estimate of cellularity. In some cases, cellularity is not due to hematopoietic cells but due to a neoplasm (primary or infiltrative). In this case, cellularity may be increased due to the neoplasm, with hematopoietic cells actually being hypocellular. 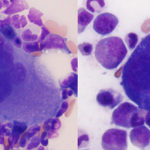 Iron stores are normally visible in most species except cats.  Iron is found within macrophages as ferritin and hemosiderin, but likely only the latter is visible with regular stains or Wright’s stain. Iron can be seen in individual macrophages or as dense chunks (still within macrophages) in the spicules. Iron can be seen more distinctively using a Prussian blue stain and is subjectively assessed as adequate, increased or decreased. As for cellularity and megakaryocytes, spicules are needed to assess iron stores. Iron is usually not seen in mature or immature RBCs and the presence of iron in these cells (siderocytes if in mature RBCs and sideroblasts if in nucleated RBCs) is an abnormal finding in most species.

Evaluation of other cell types

We evaluate other cell types that can normally be present in low numbers in the bone marrow (i.e. lymphocytes, plasma cells, mast cells, and macrophages). Lymphocytes and plasma cells typically comprise <10% and <2% of all marrow cells, respectively, in dogs and horses and <20% and 2% of all marrow cells respectively, in cats. Rodents can have substantial numbers of small lymphocytes in the marrow (up to 30-40%). In contrast, macrophages and mast cells are seen in low numbers (generally they are embedded within spicules) or not at all, respectively. Any abnormal cell types (e.g. leukemia or infiltrating neoplasia) or infectious organisms (e.g. Histoplasma, Leishmania, etc.) are also reported.