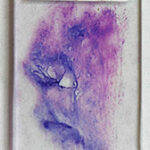 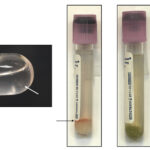 Tracheal washes (TW) are collected via the trachea (transtracheal wash) or via an endoscope (preferably guarded). Normal TW should contain mucus (see figure to right; cells are caught up within mucus) and a wash that lacks mucus may not be truly representative of the airway secretions. Since a TW samples the larger airways, it represents cumulative secretions from multiple lung lobes. Thus, it is ideal for infectious disease testing, e.g. bacterial or viral infection. Smears made from TW fluid should be rapidly air-dried (placing the back of the slide on hairdryer) to prevent slow drying and the smears being too thick and cells too poorly spread to evaluate. At Cornell University, we use the gentle “contact” smear technique to prepare TW smears from either unconcentrated (if there is sufficient mucus) fluid or fluid concentrated by centrifugation (sediment smears). Due to the mucus, we do not perform cytospin smears of TW fluid, unless the fluid lacks mucus.

Smears of TW should contain moderate to large amounts of typically stringy purple to pink strands of mucus. There may be free mucin granules in the background. Normal samples are typically of low to moderate nucleated cellularity, with the nucleated cells being mostly macrophages, presumably of alveolar origin, with <10% neutrophils (although some investigators use a cut-off of >20% neutrophils for defining inflammation in tracheal wash samples [Allen et al, Sweeney et al 1992, Malikides et al 2003, Allen et al 2019]). Lymphocytes may be seen in low numbers. Macrophages are lightly vacuolated and contain little to no phagocytic debris in their cytoplasm. In horses, binucleated and multinucleated macrophages can be seen in the TW of clinically healthy animals, but these cells are abnormal findings in other small animals. Ciliated columnar epithelial cells, often present in clusters but also as individual cells, can be present. Low numbers of goblet cells may be interspersed within the epithelial cell clusters or as individual cells. Loss of the ciliary tufts (ciliacytophthora) has been associated with viral infections in horses (Fortier et al 2009). There are always low to sometimes moderate numbers of erythrocytes in a transtracheal wash due to minor trauma associated with penetration of the skin or tissue of or surrounding the trachea. In horses and ruminants (particularly if kept indoors), pigmented or dematiaceous (pigmented) fungal hyphae and/or spores may be seen, usually attached to macrophages (it is not clear if these organisms are phagocytized – they do not appear to be in a phagocytic vacuole). These are environmental inhabitants and are more frequently observed in washes from stabled horses or those fed from round bales or dusty, moldy hey, including animals without clinical evidence of disease. However, these fungi can contribute to the syndrome of equine asthma. In a study of 731 horses with poor performance or clinical signs of respiratory disease, there was a 2 fold higher chance of animals having asthma if they had fungal elements within TW samples (Dauvillier et al 2019). Plant debris with protozoa may be seen if the tracheal wash is contaminated by cud in ruminators. The environmental conditions under which animals are housed will also affect results.

A TW can be repeated every 24 hours in horses without significantly affecting the neutrophil percentage (Tee et al 2012). 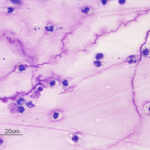 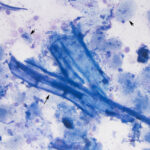 Mucus spirals: Also known as Curshmann’s spirals, these structures are thought to represent inspissation of mucus in the smaller bronchi and bronchioles. They likely represent altered mucin production from seromucous bronchial glands in response to airway inflammation or irritation, which results in increased viscosity of the secreted mucus (Antonakopoulos et al 1987). They are commonly seen in horses with asthma but can be seen with other conditions, e.g. equine multinodular pulmonary fibrosis.

In horses, a BAL is usually performed in a blind fashion via the nares, advancing a flexible tube down into the airways until it is solidly lodged in a bronchus. When done in this way, the tube usually samples the right middle lung lobe. Hence only diffuse diseases or regional diseases affecting this lung lobe will be sampled with this method. It can also be done via an endoscope, which allows placement of the tube into different bronchi. The ACVIM consensus statement recommends the instillation of 1 – 2 x 250 ml boluses of saline for lavaging the smaller lower airways (Couëtil et al 2016). Usually around half or slightly more of the fluid is retrieved. The obtained fluid is usually slightly cloudy and frothy, presumably from surfactant. At Cornell, the samples are usually submitted in a sterile large cup. In the laboratory, the sample is mixed, then filtered through a 70 um filter. Since BAL fluids are typically of low cellularity (<530 cells/uL), cell counts are done and cytospin smears are prepared from the filtered fluid. If there is material left on the filter (retentate), a direct smear is made of the retentate. The latter only typically occurs if there is contamination of the BAL fluid with material from the larger airways, which contain mucus (and then is more similar to a tracheal wash than a BAL). We used to perform cell counts manually with a hemocytometer, but we have switched to performing counts with our hematology analyzer. Internal testing shows that the nucleated cell count trends higher with the automated counter than the manual counts (mean difference of 100-120 cells/uL), however given the inherent imprecision and difficulty with doing manual cell counts, the automated analysis is still preferable.

For equine BAL fluids at Cornell, we stain 2 cytospin smears with modified Wright’s stain for cytologic assessment and differential cell counts on leukocytes and one with Prussian blue for detection or confirmation of hemosiderin-containing macrophages, which indicate prior hemorrhage. Typically, a 400-cell differential cell count (nucleated cell count permitting), excluding any inadvertently aspirated epithelial cells from the larger airways, is done. BAL fluid should contain mostly leukocytes with only a few to no erythrocytes or cells from larger airways (intact or fragmented goblet cells, ciliated columnar epithelial cells) or mucus. Total nucleated cell counts are stable for up to 72 hours refrigerated or at room temperature, however morphology is optimal if samples are stored <48 hours at refrigerated temperatures (Pickles et al 2003).

The two samples are not synonomous but can provide complimentary information in individual horses, depending on the disease. In general, a TW analysis is preferred for infectious disease diagnosis and antimicrobial testing or monitoring/checking racehorses with poor performance or clinical signs of respiratory disease (in the United Kingdom [Kinnison and Cardwell 2020]) or detection of exercise-induced pulmonary hemorrhage. Bronchoalveolar lavage is preferred for assessment of diffuse, typically chronic, lung disease, such as the different variants of mild asthma (inflammatory airway disease) and viral infection (see table below).

Several studies have shown discordance between TW and BAL neutrophil percentages, with higher and lower percentages in TW versus BAL, depending on the disease (Winder et al 1991, Derksen et al 1993 and references below). Internal studies at Cornell have shown higher neutrophil percentages in TW than BAL fluids in a small number of horses with equine multinodular pulmonary fibrosis and those with asthma (mostly mild). Similar findings have been reported by others (Malikides et al 2003), whereas fewer horses had neutrophilia in TW versus BAL samples (40 veresus 59%) in a study of sport horses with poor performance (Allen et al 2006). Horses with pneumonia can have normal BAL fluid results if the affected lung was not sampled during the procedure (Rossier et al 1991). In contrast, mild increases in neutrophil percentage are seen in the BAL but not TW of horses with access to or housed indoors versus on pasture or with transportation (Allano et al 2016, Rossi et al 2018, Hansen et al 2019). Fluid from BAL contains more mast cells than TW samples (Hughes et al 2003).

open all | close all