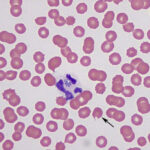 Anaplasma phagocytophilum in a dog

Infections with organisms can be detected by examination of peripheral blood smears. Some are important as causes of disease in the host animal, while others are essentially non-pathogenic under most circumstances. Some infectious agents cause hematologic changes but are not identified on the blood smear. Infectious agents (or byproducts of their presence) can be seen in all cells in blood as well as in the background plasma.  In this section, we provide information on the following: