The following are the general categories of cytologic interpretation:

Note:  Often more than one category is present, as inflammation can result in dysplastic changes in the surrounding tissue and inflammation often accompanies a neoplastic process.

There are many reasons for obtaining a non-diagnostic sample:

If the sample has adequate cellularity and the cells are well-stained and well-preserved, the next step in cytologic diagnosis is the identification of the cell types and pathologic process that are present. It helps to ask a series of questions when working through smears:

Cells are present in normal numbers for the tissue aspirated and do not possess significant criteria of malignancy.  This finding is most common when aspirating internal organs or lymph nodes, as most skin and subcutaneous masses represent a true pathologic process.

Inflammatory responses are classified by the type of inflammatory cells within the lesion, which also gives us clues as to the cause of the inflammation. Note that the causes listed below are not exhaustive lists, but more common examples. 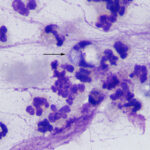 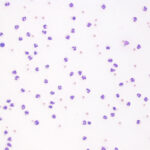 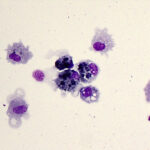 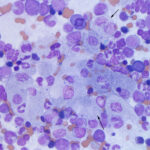 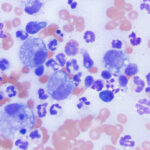 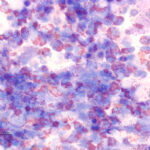 The strict definition of hyperplasia is an increase in the number of cells in a tissue; however, the term is often used in a more generic fashion in cytology as a non-neoplastic enlargement of a tissue. Hyperplasia is often the result of hormonal influences (e.g. benign prostatic hyperplasia, perianal gland hyperplasia), tissue injury (e.g. regenerative nodules in the liver, granulation tissue with fibroplasia) or antigenic stimulation (lymphoid hyperplasia). Aspiration of hyperplastic lesions may result in a higher than expected cellularity and cells may display some mild criteria of malignancy, such as a mildly increased N:C ratio, darker blue cytoplasm, slightly more prominent nucleoli or finer chromatin than normal. The latter change can be referred to as “atypia” or “dysplasia”.

Dysplasia, or disordered growth, is most often seen in epithelial tissue secondary to inflammation or irritation.  Dysplasia results in loss of uniformity of the individual cells and disordered architectural arrangement of the cells. It also results in atypical cytologic features in the aspirates cells, including nuclear to cytoplasmic asynchrony, increased cytoplasmic basophilia, anisokaryosis and anisocytosis. Dysplasia can be cytologically difficult to distinguish from neoplasia as dysplastic lesions often contain more criteria of malignancy than strictly hyperplastic lesions.

Neoplasia is suspected when there is a population of tissue cells in an aspirate that are not expected to be there, there is a mass lesion consisting of cells that are in excess for the aspirated site (e.g. too many sebaceous cells in a skin lesion) or the tissue cells are showing cytologic criteria of malignancy.  Neoplasms are further divided into four general tumor categories: Epithelial, mesenchymal, discrete (round) cell and endocrine/neuroendocrine (naked nuclei) neoplasms, based on their cytologic features and pattern of arrangement. 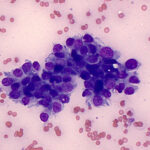 Epithelial tumors can be benign (adenoma) or malignant (carcinoma). Benign versions consist of well-differentiated cells that can be difficult to distinguish from normal tissue (unless in excess for the aspirated site) or hyperplastic lesions (which may require evaluation of tissue architecture, e.g. normal architecture and arrangement around ducts would indicate hyperplasia versus neoplasia for skin adnexal tumors). Malignant epithelial cells usually demonstrate cytologic criteria of malignancy particularly as they become more aggressive or advanced. However, some carcinomas (e.g. the rare perianal carcinomas) do not always show features of malignancy but behave in a malignant fashion. As carcinomas become less differentiated they lose some of these features and often become less cohesive, mimicking mesenchymal cells. Indeed, epithelial tumors undergo epithelial-to-mesenchymal transition when they are metastasizing so spindled cells within an epithelial tumor may represent the tumor undergoing EMT or reactive fibroplasia (e.g. schirrous response, which is seen with certain epithelial tumors such as intestinal tumors). In the more anaplastic tumors, immunohistochemical staining for cytokeratin can be necessary to confirm an epithelial origin. We can often determine the type of epithelial tumor on cytology, particularly if the cell of origin has specific features (e.g. perianal tumors have a “hepatoid” appearance; exocrine pancreatic carcinomas have faint pink cytoplasmic granules) or the tumor cells are showing features of differentiation (e.g. squamous cell carcinoma). In many cases, the type of tumor may be based on the aspirated site, e.g. mammary gland, along with cytologic features (i.e. we use the history to help determine what the lesion or tumor is). 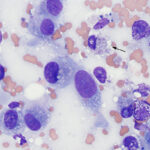 Mesenchymal neoplasms carry features of their embryonic tissue of origin, the mesenchyme. The cells are generally individualized and spindled in shape. They can be seen in aggregates (not clusters), often held together by extracellular matrix. They do not typically demonstrate cell-to-cell adhesion. Due to increased matrix production, there are some mesenchymal tumors (e.g. fibroma) that do not exfoliate well and aspirates may be of low cellularity making a definitive cytologic diagnosis difficult. Examples include myxoma, fibrosarcoma, osteosarcoma, melanoma and hemangiosarcoma. Mesenchymal tumors generally have the following features:

As for epithelial tumors, mesenchymal tumors can be benign (“..oma”) or malignant (“sarcoma”). Some types of mesenchymal tumors, e.g. soft tissue sarcomas, are called sarcomas, even though they do not metastasize quickly. They are, however, locally invasive. There are also certain types of mesenchymal tumors that mimic epithelial tumors, showing cell-to-cell adhesion, including melanoma and epithelioid variants of hemangiosarcoma. It can be quite difficult to differentiate between a mesenchymal tumor and reactive fibroblasts on cytologic features alone, because the latter can have quite large nuclei and prominent nucleoli (they also display moderate to occasionally marked anisokaryosis and anisocytosis). This is particularly a problem in bloody or poorly cellular specimens. Several variants of mesenchymal tumors can be diagnosed with certainty on cytology if they have characteristic cellular features (e.g. crown-like cells in soft tissue sarcoma, melanin in melanocytic tumors) or characteristic matrix (e.g. osteosarcoma, chondrosarcoma). We can also use site to narrow down the differential diagnostic list. For example, a gastrointestinal stromal cell tumor or smooth muscle tumor (leiomyoma, leiomyosarcoma) would be suspected for a mesenchymal tumor arising in the intestine. However, there are many mesenchymal tumors in which a definitive determination of tumor type cannot be provided, even when we know the aspirated site.

Discrete or round cell tumors often are of hematopoietic origin (lymphoma, histiocytic, mast cell tumor) and as the term suggests, consists of individualized round cells. Cells tend to exfoliate readily and aspirates are often of high cellularity. We can use morphologic features of the cells, including the presence or absence of granules and cytoplasmic and nuclear features, to determine the type of round cell tumor. 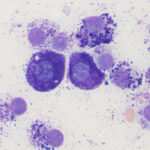 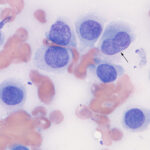 Histiocytoma: Cell of origin is the epidermal Langerhans cell. These may not be tumors per se as they regress without treatment due to a cytotoxic T cell immune response. They can be single (usually are) or multiple 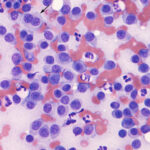 Plasmacytoma: These arise from plasma cells, which form tumors (usually solitary) in extramedullary sites, such as the skin (digit, ears, mouth) in dogs. 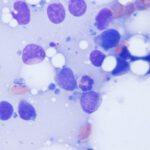 Lymphoma: There are multiple forms of cutaneous lymphoma, including inflammatory, epitheliotropic and non-epitheliotropic forms. In the skin, lymphoma can consist of solitary to multiple nodules, plaques or ulcerative/exfoliative lesions. It can be pruritic. Lymphoma, as we know, also arises in other sites. They are usually of T or B cell origin. Lymphomas of natural killer cell origin are quite rare. Lymphoma is most easily recognized when it consists of large cells or cells that are not expected in inflammatory lesions, such as many granular lymphocytes. It is far harder to recognize when the cells are intermediate to small, however the lack of other immune cells (plasma cells) or inflammatory cells can lead to a suspected diagnosis of lymphoma. Lymphoid cells have the highest nuclear to cytoplasmic ratios of all the round cells. They can rupture easily and one can see cytoplasmic fragments (“lymphoglandular” bodies) in the background, which can be a helpful but not definitive finding. The main differential diagnoses for cutaneous lymphoma are inflammatory or immune-mediated conditions or localized antigenic stimulation, e.g. pseudolymphoma secondary to an insect bite. There are histiocytic variants, which have more abundant cytoplasm and can mimic a histiocytoma. Ultimately, the diagnosis of cutaneous lymphoma often requires biopsy with immunohistochemical staining to confirm a T (CD3) or B (e.g. Pax-5 or CD20) origin for the tumor cells. 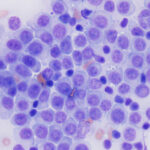 Transmissible venereal tumor: This sexually transmitted tumor is thought to be of histiocytic origin. It is mostly seen in warmer cell climates and is often around the mouth or genital region, but can be seen in other sites. 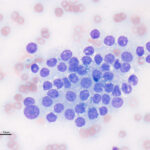 These tumors have a characteristic appearance, forming packets of cells. Cells often exfoliate in large numbers but are fragile and aspirates contain many bare nuclei from ruptured cells, hence some people call them “naked nuclei” neoplasms. They are of secretory epithelial (producing hormones, e.g. thyroid tumors) or neuroectodermal origin, with the latter secreting neurotransmitters, such as epinephrine in phaechromocytomas. Many of these tumors have quite uniform or bland cytologic features, but show aggressive malignant behavior (e.g. thyroid carcinomas in dogs), therefore cytologic criteria of malignancy are unreliable and we go by the known biologic behavior of the tumors. The type of endocrine or neuroendocrine tumor is generally determined by site, e.g. a cervical neck mass could be thyroid or parathyroid in origin, with the former being more common. In some types of tumors, we can be more definitive, for example thyroid follicular tumors can contain tyrosine granules (blue green pigment) in the cytoplasm.