Analysis of synovial fluid begins at collection, assessing for blood contamination. If the fluid starts off clear and becomes bloody or starts off bloody and then become clears, blood contamination is likely. If the fluid remains bloody throughout collection, there could be intra-articular hemorrhage or blood contamination (smears can be assessed for evidence of prior hemorrhage, see below). If sufficient fluid is collected, it should be placed in an EDTA anticoagulant-containing or purple top tube (EDTA preserves cell morphologic features and inhibits bacterial growth). A red top or non-anticoagulant tube is not usually indicated, because biochemical analyses are not usually performed on synovial fluids. A culturette is preferred to a non-anticoagulant tube, if culture is anticipated or desired. Sometimes only enough fluid is aspirated to make 2-3 smears. Ideally, these should be “squash” (or better phrased “contact”) smears due to the viscosity. Regardless, direct smears should be made from any fluid and submitted with the EDTA tube. The smears should be rapidly air-dried (with a hair dryer on the highest setting directed to the back of the slide). This is imperative for optimal smear preparation – due to the viscosity, joint fluid dries slowly, the cells do not spread well and can be difficult to impossible to identify, let alone look for informative or diagnostic intracellular structures, such as bacteria or phagocytized nuclear debris. Smears and tubes should be labeled with the patient identification, date, and joint aspirated. A complete history should be provided, with relevant details (e.g. polyarthropathy, single joint, prior surgery, signalment, differential diagnoses, radiographic findings if known, infectious disease titers, etc). Tubes, but not smears, should be refrigerated and submitted on ice packs (with a paper towel between the tube and the pack to prevent freezing of the sample and cells). Smears should be kept at room temperature and all should be shipped in break-proof containers, free of samples in formalin. Note, that if only a small volume of fluid is obtained (<0.2 mL), this should be placed in microtainer tubes versus large EDTA tubes, because EDTA can falsely increase the total protein, as estimated by refractometer.

Most laboratories perform nucleated cell counts, red blood cell (RBC) counts, an estimate of viscosity, and cytologic smear assessment. Hyaluronidase can be added to fluids with very high viscosity that gel within the tube (called thixotropism), however this is not routinely done. 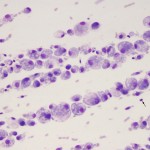 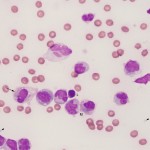 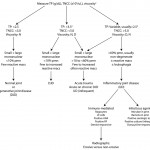 Unfortunately, synovial fluid analysis rarely is specific for an underlying cause. Thus, the fluid is usually classified as being non-inflammatory (degenerative joint disease or trauma) or inflammatory, based on the nucleated cell count, total protein, viscosity, types of cells and appearance of cells in the fluid (see algorithm). In some fluids, there are unique features that can help with a definitive diagnosis, e.g. ragocytes, lupus erythematosis (LE) cells, morulae of granulocytic Anaplasma or Ehrlichia organisms, but this is uncommon.

Blood contamination will falsely increase the total nucleated cell count (blood-associated leukocytes; their contribution will depend on the peripheral leukocyte count), total protein and % of neutrophils and will decrease viscosity. The degree to which blood influences these results is entirely subjective (opinion of clinical pathologist). In a freshly prepared sample, there will be platelets and no evidence of erythrophagia, however peracute hemorrhage can look similar. Thus, examination of the fluid during collection is the best way to assess for overt blood contamination (but will miss microscopic contamination). Erythrophagia does not provide additional information in smears made from stored fluid, because macrophages will phagocytize erythrocytes in the tube in vitro, particularly if activated (this can occur rapidly, within 2 hours, of collection).

Hemarthrosis should be suspected if the aspirated fluid resembles blood and the fluid does not clot in a non-anticoagulant tube or there is erythrophagia, hemosiderophages or hematoidin crystals observed in smears of freshly made fluid (note that hematoidin crystals only form in a non-toxic environment). This is uncommon but can be seen secondary to hemostatic disorders, particularly inherited disorders of secondary hemostasis, such as hemophilia A, and anticoagulant rodenticide toxicosis. A coagulation panel is always worthwhile in an animal presenting with hemarthrosis. 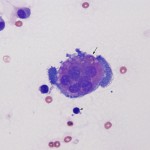 These can be due to trauma or degenerative joint disease (DJD). The joint fluid can be normal, but there is usually increased volume (hydroarthrosis) and a mild increase in large total nucleated cell count (usually <5,000/uL) consisting mostly of mononuclear cells (macrophages with some synoviocytes), that may be “activated” (foamy cytoplasm, cytoplasmic vacuolation), decreased viscosity, and a mild increase in total protein (usually <4.0 g/dL). Reactive synoviocytes (bi- or multinucleated, deeper blue cytoplasm than normal, aggregates of synoviocytes) can be seen, supporting underlying synovial hyperplasia. Multinucleated synoviocytes must be differentiated (which can be difficult) from multinucleated osteoclasts, with the latter indicating damage to or erosion of cartilage with exposure of subchondral bone. Osteoclasts generally have pink granular cytoplasm, whereas syniovocytes have deeper blue cytoplasm, which lacks granules, and tend to have fewer nuclei that are centralized within the cell compared to the diffuse distribution of osteoclast nuclei. Cartilage fragments may be seen if there is injury to cartilage, but could also be inadvertently aspirated. In one retrospective study in 130 cattle with different arthritidies (Rohde et al 2000), 8 cattle with DJD had average nucleated cell counts of 219/uL (range, 43-8,500/ul), with an average of 7% neutrophils (range 1-70%, blood contamination not indicated) and 90% mononuclear cells (range, 30-99%). The average total protein was 2.5 g/dL (range 0.3-5.7 g/dl). Exercise does not increase nucleated cell counts or total protein, but does increase synovial fluid volume in horses. 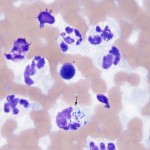 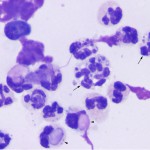 This is usually due to an increased proportion of neutrophils (>10%, as long as it is not attributable to blood contamination). Neutrophils are rarely degenerate, even with bacterial sepsis. Total nucleated cell counts and protein are usually high (>5,000/uL and >3.0 g/dL, respectively) but can be within normal limits) and viscosity can be normal or decreased (more often decreased with sepsis than immune-mediated disease). Concurrent hemorrhage may be seen.