Infectious agents of various classes can be observed in urine sediments. In most cases, their significance can be properly assessed only in light of the clinical signs, method of collection, post-collection interval, and other findings in the urinalysis. For instance, urine collected off the floor or some other receptacle could be contaminated by fecal material. Organisms seen in feces (bacteria, Trichuris eggs) may be then misidentified as urinary pathogens. Rarely, organisms that are abundant in peripheral blood may be seen in urine samples with severe blood contamination or hematuria. For example, there have been reports of microfilaria of Dirofilaria immitis being observed in urine of a dog with hematuria and severe microfilaremia due to heartworm infection.

Bacteria are subjectively quantified in urine as: few, moderate and many. They can be detected in unstained urine sediments when in sufficient quantity.

Bacteria may be insignificant contaminants or important pathogens. Distinguishing between these possibilities relies on clinical signs, the method of urine collection, the number and types of bacteria, the presence of leukocytes in urine, the length of urine storage, and any underlying disease in the animal. Some factors to consider when interpreting the presence of bacteria in an urine sample are: 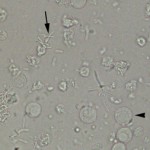 WBC and bacilli in unstained urine.

Bacteria can be identified in unstained urine sediments when present in sufficient numbers by their characteristic rod shapes. This is more readily done for bacilli than cocci, which can mimic other structures.

Bacteria are not seen in normal urine (which is sterile). Their presence could indicate an infection (particularly if in large numbers, of a uniform type or accompanied by pyuria) or contamination (more likely in voided samples). 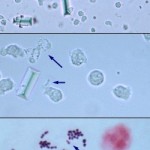 Bacterial cocci are readily identified when they form long chains (likely Streptococcus spp.) as shown in the image of urine at left. However, doublets and clusters must be distinguished from small amorphous crystals, cellular debris, and small fat droplets, all of which show brownian motion in urine. A Gram-stained smear of urine sediment could be done to confirm the presence of cocci and distinguish them from non-bacterial structures. 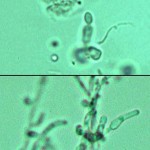 Yeasts in unstained urine sediments are round to oval in shape, colorless, and may have obvious budding (upper panel). They often represent contaminants, and are especially suspect if the sample is voided and/or old.

In other circumstances, however, their significance should not be discounted. The pictures shown here, for example, are of fresh urine collected by cystocentesis from a dog that had been on long-term antibiotic and immunosuppressive therapy. The lower photo shows pseudohyphae formation by the yeasts, which were identified on culture as Candida albicans. 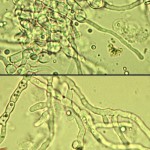 Fungal hyphae in urine sediment preps most commonly represent overgrowth of contaminants in samples where analysis was delayed.

If seen in a fresh sample, especially one collected by cystocentesis, fungal infection of the kidneys and/or bladder should be suspected.

Aspergillus terreus (shown at left) has been documented to cause systemic infection including colonization of the renal pelvis.

Capillaria plica and C. feliscati are helminth parasite of the canine and feline urinary bladders, respectively. The ova are oval in shape and have bipolar plugs. 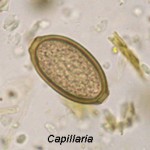 Capillaria eggs must be differentiated from Trichuris (whipworm) eggs, the latter of which may be seen with fecal contamination of the urine. If the ova were seen in a well- handled urine collected by cystocentesis, fecal contamination could be ruled out. Additionally, the ova of Capillaria (shown in left upper panel) are rougher in texture compared to the smooth, yellowish eggs of Trichuris (shown in left lower panel), Capillaria ova often have one straighter side and the bipolar plugs on Trichuris resemble screws of a light bulb (arrow).

Dioctophyma renale, the giant kidney worm, has large, yellow-brown, thick-walled ova with a characteristic wavy surface (not pictured). Eggs may be seen in urine if a gravid female worm is present. Though endemic in areas of Canada, the infection is very rare in the United States. 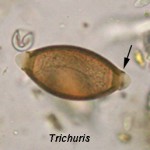