Reference intervals (also called, although incorrectly, normal ranges or reference ranges) are intervals calculated from a group or population of healthy adult animals of a given species for a given test (this is why they are called population-based reference intervals). These intervals are used to help identify abnormalities in a sick patient. Ideally, reference intervals should be established by each laboratory, as they are instrumentation and reagent dependent. For this reason, reference intervals can vary considerably from one laboratory to another. When the species in question does not have a population-based reference interval provided by the laboratory with the test results, we need to rely on published data, if available for that species, as a guide to interpreting test results. However, published “normal” values may not be valid for results generated by your laboratory. You should also be cautious when interpreting changes in laboratory data sequentially in one patient when the data has been obtained from different laboratories. In addition, one cannot simple apply another laboratory’s interval to another instrument, e.g. point-of-care instrument in a veterinary clinic. You can use another laboratory’s reference intervals as a guideline, but because different instrumentation and methods can yield quite disparate results, you should be careful when doing so. Remember, always, to interpret the laboratory data with respect to what you know of your patient! Does it make sense? If not, repeat the testing particularly if concerned about the test result (e.g. high ALT activity).

Extensive guidelines for establishing reference intervals, including number of animals, have been established by the American Society of Veterinary Clinical Pathology (Friedrichs et al 2012). To establish population-based reference intervals, blood is sampled from a large number (ideally a minimum of 120) animals of a particular species, using a mixture of breeds, ages and gender.

Other criteria to consider for reference interval determination are sample type for biochemical analytes (heparinized plasma or serum – intervals for some analytes, such as potassium, protein and globulins, will differ between plasma and serum due to the effect of clotting), season (samples should be collected over several months versus all in one season), and timing of analysis after collection. Because of the known effects of sample storage on clinical pathologic test results, samples should be collected and handled under optimal conditions, e.g. good venipuncturist, keep cool, analyze within 2 hours of collection). The latter is not always possible, e.g. all herds are >2 hours away, so some compromises may be needed.

The standard is that reference intervals include the middle 95% of the data and will exclude 5% of results from clinically healthy animals – 2.5% at the top end and 2.5% at the bottom end. Statistical programs, which sort or rank the data, are used to determine the intervals, which consist of the upper and lower limits of the interval and 90 or 95% confidence limits of these upper and lower limits. Which statistical method the program uses to establish the interval depends on the distribution of the data for that analyte or test: 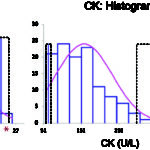 Identification of outliers is also part of reference interval determination (see CK example in the image above). This is usually done statistically with the program, however the result should always be verified by visual inspection. This is because tests with a small range of results in clinically healthy animals, e.g. total bilirubin in dogs, a result that is within analytical variation may be erroneously flagged as an outlier by the program. For example, 25 results of 0 mg/dL and 5 results of 0.2 mg/dL for total bilirubin from 124 dogs were flagged as outliers by the program in a reference interval determination done in our laboratory. However, because of analytical variation, 0 is not different from 0.1 or 0.2 mg/dL. In addition, if several animals have extreme values, the statistical methods used to identify outliers may not recognize these extreme values. Ultimately, it is the decision of the clinical pathologist examining the data for inclusion or exclusion of outliers. This is based on a good measure of common sense as well as knowledge of the importance of the test result. If outliers are included in reference interval determination, you are compromising sensitivity (true positives) for the sake of specificity (false positives) as the reference interval will naturally be broader. If you exclude outliers,  you will narrow the interval, which means you are compromising specificity for sensitivity, which may be more important for that particular test result. The general rule of thumb is that outliers should be left in whenever possible unless a valid reason is identified for their exclusion (e.g. known error in analysis or collection, a known pre-analytical error).

As a result of the technique for establishing reference intervals, up to 5% of normal animals may have values that fall outside (2.5% above and 2.5% below) the reference interval for a given test. When numerous tests are run on the same animal, the chances of obtaining one or more slightly “abnormal” results on an animal that actually is normal rises (p = 1 – 0.95n). For 12 tests, p = 0.46; for 21 tests, p = 0.66. Thus, if you have a panel of 20 tests, it is likely at least one will be abnormal as a matter of chance or “normality” versus disease. What this means is that small deviations outside the reference interval may not be clinically relevant. In other words, clinically healthy animals may have mildly reduced or increased analyte concentrations or activities compared to a reference interval, but the values are actually normal for that animal.

So how do you know when it is safe to assume that a value outside of the reference interval is not clinically relevant? This will be somewhat dependent on the analyte, e.g. mild increases in liver enzymes may not be diagnostically relevant (depending on clinical signs), however electrolytes are maintained within fairly narrow limits and alterations are more likely to be clinically relevant (again, depending on clinical signs and other findings – interpret with what you know about the case). The following criteria can be used as a guide, by which you can be reasonably safe to assume that a high or low result is not “actionable” (i.e. dictating a treatment or management decision):

However, if in doubt as to whether an abnormal test result is a disease-associated finding, you can always retest to see if the identified change is persistent or getting worse (the interval between testing is subjective but can be determined by the test, for example if the abnormal result is in the hemogram, retesting in 24-48 hours is typical; if a liver enzyme increase – retesting can be done in 1-2 weeks). 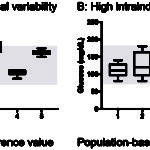 We now know that there are certain analytes in which population-based reference intervals may not be the best way for establishing “normal” or identifying “abnormal”. This is because of biological variation, i.e. inherent differences that occur naturally within (intra) and between (inter) individuals. These differences are due to diet, breed, sex, environment, genetics etc. So how does intra- and inter-individual biological variation affect interpretation of test results?

There is published data for subject-based reference values and reference change values for hematologic, biochemical and coagulation tests in various species (Baral et al 2014, Bourgès-Abella et al 2015, Falkenö et al 2016, Scruggs et al 2016, Wright et al 2018). These studies show that test results for most hematologic or biochemical analytes fall in a gray zone, i.e. where it is not clear-cut to use population-based reference intervals or subject-based reference values (see method of determination below). In addition, just like population-based intervals, the animals, instrument and methods used to establish the reference change value or critical difference will affect the obtained values, so any published values should be used as a guide in test interpretation. Indeed, there are differences between the published studies in the actual value for the reference change value and the tests to which applies. This can be attributed to differences in study methods, including instrument, method, and reagent and lack of standardization as to numbers of animals, frequency of blood sampling, methods used to measure analytical variation and even the formula and cut-off used to determine if subject-based reference values apply (see below).

To determine if population-based reference intervals or subject-based reference values apply for a given laboratory test, blood is collected from several different animals on multiple occasions, generally at the same time of the day and under the same housing conditions, to minimize the effect of these variables on test results. As stated above, there is no standardization between studies on either animal numbers nor frequency of sampling. There also needs to be an assessment of the analytical variation or, specifically, the precision of the instrumentation used in the study, however the method for determining assay precision is not always clearly stated in the published studies (it likely represents between day variation in relation to quality control material).

Reference change values (RCV) or the critical difference is determined from the following formula:

Again, reference change values have been published for various tests, however these should be used as a guide.

It is hard to keep track of individual reference change values for the multiple test we run, let alone for each species, and population-based reference intervals are easy to use when provided by the laboratory. So, as a practicing veterinarian, which of these methods should you use for identifying abnormalities that may indicate underlying disease? Our bottom line is:

The reference intervals provided by the Animal Health Diagnostic Center of Cornell University were established from healthy animals, using the equipment with specific methods and reagents. Because results are analyzer-, method- and reagent- dependent, these intervals are only valid for results from our laboratory. Reference intervals are available for hematology and chemistry tests for dogs, cats, horses, cattle, goats and alpacas and blood gas and electrolyte intervals for dogs, cats, horses and cattle. For species without established reference intervals, one should refer to general publications and textbooks as a guideline only. With many of the tests, (e.g. immunology) the manufacturers’ intervals are used, or not provided at all, however guidelines for interpretation are usually provided.

Our most recent intervals were established by collecting blood from at least 120 adult healthy animals. These healthy animals were obtained from a variety of sources (eg, student- or faculty-owned). Therefore, the reference intervals are only applicable for adult animals and not young animals. Results from young animals may fall outside our reference intervals because of age-dependent changes in test results. For example, phosphate concentrations and alkaline phosphatase activity are higher in young animals and decrease to within reference intervals at about one year of age. Foals and calves have microcytic erythrocytes until one year of age. Hematocrits are lower and lymphocyte counts are higher in puppies and kittens under four months of age. Similarly, immunoglobin concentrations are lower in animals under one year of age.