The color of the urine sample is assessed visually and reported as red, brown, yellow, etc, or combination thereof, along with a modifier for the depth of color, eg, light yellow, dark red/brown, etc. Some examples of various urine colors and corresponding common causes are shown below (this is not an exhaustive list – there are many other substances, including drugs, which can influence urine color). In addition, color is quite subjective and dependent on observer. For example, bilirubin can look green or brown, depending on the observer. Urine color partly correlates to urine specific gravity (USG), with increasing intensity of yellow being associated with increased median USG in canine urine, i.e. clear to slightly yellow urine has a median USG of 1.013 (all tested urine samples had a USG <1.030), whereas dark yellow urine had a median USG of 1.041, but the USG of the different categories of urine color did overlap (clear, light yellow, medium yellow, dark yellow) (Cridge et al 2018).

The turbidity of the urine sample is gauged subjectively and reported using the descriptors: clear, slightly cloudy, cloudy, opaque, or flocculent.

Normally, fresh urine is clear to very slightly cloudy. Excess turbidity results from the presence of suspended particles in the urine. The cause can usually be determined based on the results of a microscopic urine sediment examination. 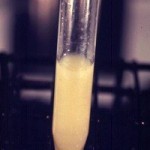 A sample of turbid urine