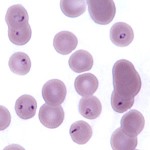 Various forms of Cytauxzoon felis in the blood of an experimentally infected cat.

Cytauxzoon felis is an apicomplexan protozoal parasite that causes severe, and often fatal disease, in cats. Organisms parasitize erythrocytes and schizonts are found in macrophages in blood and tissues, facilitating diagnosis (for more images of the parasite, including schizonts, see the feline blood and infectious disease albums under the Atlas in the hematology gallery).

The disease is transmitted by ticks and Bobcats have been identified as the reservoir host (and are usually asymptomatic), with the cat being considered a dead-end host. Transmission is primarily mediated by Amblyomma americanum  (Lone Star) ticks. The organism undergoes sexual reproduction in the gastrointestinal system of the infected tick, which then deliver the organism as sporozoites into tissues of bitten cats. This begins the acute tissue phase of infection, where sporozoite asexual replication within macrophages forms large schizonts, which can block the vasculature leading to end-organ injury and death. Rupture of schizonts releases merozoites, which parasitize red blood cells. These infected erythrocytes can then complete the life cycle if taken up by a tick. The disease can be transmitted experimentally to cats via administration of schizonts, but not parasitized erythrocytes. The disease is common in Missouri, being identified in the majority (up to 80%) of tested bobcats in that state, and Oklahoma, but it has been identified in many other states in the south-eastern USA, which is thought to be due to an expanding range with the tick vector (likely from changes in climate). Once thought to be universally fatal in domestic cats, it is now known that cats can recover from the disease and remain persistently infected carriers (Sherril and Cohn 2015).

Clinical signs become evident within 2 weeks of infection and are due to schizogeny within tissues and not anemia, since disease severity does not correlate to the degree of red blood cell parasitemia. Cases are usually seasonal, matching times of peak tick activity (spring through fall) and are seen more in cats with access to the outdoors than strictly indoor cats, due to exposure to the tick vector. Clinical signs are not specific and include an acute onset of lethargy, anorexia, fever, and icterus. Some cats can present moribund. On laboratory testing, cats usually have a moderate normocytic normochromic non-regenerative anemia, a mild to moderate leukopenia (a degenerative left shift and moderate toxic change are commonly observed, compatible with an inflammatory leuogram), and a moderate to severe thrombocytopenia (average 60,000 platelets/uL, reference values >200,000/uL), i.e. Cytauxzoon is one differential diagnosis for pancytopenia in cats. In one hemostatic study of 5 cats, all affected cats were anemic (19-27%, lower reference limit 29%) had thrombocytopenia (19 to 57,000/uL), a prolonged PT, a low protein C activity (15-47%, reference interval 65-120%). defects in the activities of multiple coagulation factors (FXI, FX, FIX, FVII) with 4/5 having a prolonged APTT and high D-dimer concentrations (814-1623 ng/mL, reference values <250 ng/mL).  On thromboelastography, all cats had a prolonged reaction time (R), with increased time to clot formation (low alpha and high K) in 4/5 cats and decreased clot strength (low MA) in 2 cats. None of the cats were hypercoagulable or had a low AT activity (the latter is extremely uncommon in cats). These results supported the presence of a hypocoagulable state, likely disseminated intravascular coagulation in affected cats, two of which survived the infection (Connor et al 2015). The anemia is considered hemolytic in origin, although there is no evidence of regeneration. The latter has been attributed to acute disease or suppression of the marrow from concurrent inflammatory cytokines. 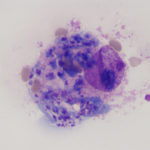 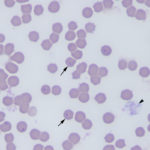 The organism can be recognized in blood smears as 1-2 um small, ring or safety pin-shaped bodies in red blood cells, but can be readily missed with low levels of parasitemia, which is more likely early in infection. They must also be distinguished from stain or water artifact, siderocytes, degrading Howell-jolly bodies and other hemoparasites, such as Babesia felis. Ring forms with a distinct nucleus are characteristic of the organism. The presence of schizonts in blood smears would be pathognomonic. Concurrent infections with Mycoplasma haemofelis have been seen. Schizonts within macrophages may be observed at the feathered edge of blood smears (a rare finding) or in aspirates or imprints of various tissues, such as the spleen, liver, lymph node and bone marrow. Schizont-containing macrophages have a characteristic prominent large nucleolus. Recovered cats with persistent parasitemia are not anemic. Biochemical changes are not specific and consist of hyperbilirubinemia (increased direct bilirubin, which may be secondary to anorexia-induced bile sludging versus liver damage per se), a stress hyperglycemia and hypoalbuminemia (vascular leakage or negative acute phase response from inflammation). Widespread hemorrhage, edema, and thrombosis, probably caused by the tissue phase, are usual post-mortem findings. The disease is diagnosed by polymerase chain reaction testing for the organism, identification of the organism in erythrocytes or as schizonts in tissues. Since subclinical infections are now recognized, piroplasms may be seen in the blood of some cats with illness that is not due to the organism, so the presence of the organism does not always equal disease (Sherrill and Cohn 2015).

The disease can be treated with supportive care (including analgesics, fluid therapy and possible anticoagulant drugs, such as heparin, which is not without controversy) and anti-protozoal drugs, such as a combination of atovaquone and azithromycin. Survival rates of up to 60% have been reported in some studies. Prevention relies primarily on tick control (Sherrill and Cohn 2015). The identification of a highly immunoreactive and conserved gene sequence (cf76) in the transcribed protein, with protein transcription occurring during schizogeny (Tarigo et al 2013).