Anaplasma species are intracellular bacteria that are within the family of Anaplasmataceae of the order Rickettsiales. The family of Anaplasmataceae now includes the genera of Ehrlichia, Anaplasma, and Neoricketssia, after renaming of organisms and reclassification in 2001 based on 16S RNA and groESL gene sequences in the bacteria  (Allison and Little, 2013). The names of some species, however, remains unchanged, however the genera of Anaplasma now includes pathogenic and non-pathogenic bacteria that infect erythrocytes (e.g. Anaplasma marginale), leukocytes (e.g, Anaplasma phagocytophilum) and platelets (Anaplasma platys). 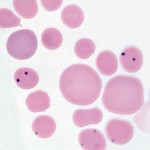 Anaplasma marginale is an intracellular erythroparasite of cattle that produces severe hemolytic anemia and is of major economic importance. Endemic areas in the U.S. are the south and southwest and some parts of California. The disease is transmitted by several species of ticks and is called tick-borne fever. After infection, there is an incubation period of several weeks followed by a period during which parasitemia increases rapidly and is quickly followed by precipitous drop in hematocrit.

The clinical syndrome is one of acute onset, severe anemia with icterus, fever, anorexia, dehydration and depression. Unlike Babesia species, hemoglobinuria does not occur as the hemolysis is extravascular (in the spleen and bone marrow). With acute infection, cattle can die or suffer abortion. Up to 90% of erythrocytes contain the organism. If they survive, several days after the onset of signs, the number of parasites is very low and anemia is regenerative (macrocytic and hypochromic with reticulocytosis). A concurrent immune-mediated hemolytic anemia (with spherocytes) may also be present and results in removal of non-parasitized red cells. Young cattle < 6 months old are resistant to infection. It is acute, and occasionally fatal, in cattle under 3 years of age, whereas older cattle have a 30-50% mortality rate.

Diagnosis of anaplasmosis is confirmed by finding the parasite – it is recognized as small, round dark purple inclusions located at the periphery of red cells. There are usually more than 1-2 per cell. The organism must be differentiated from Howell-Jolly bodies. Serology is also used for diagnosis (IFA, complement fixation, ELISA) as is bacterial DNA detection by polymerase chain reaction (PCR). Effective vaccines have mitigated the economic impact of the disease.

Anaplasma ovis infects goats and sheep and is usually non-pathogenic (unless the animals are splenectomized).

Two main species of Anaplasma are thought to infect dogs – Anaplasma phagocytophilum (aka Ehrlichia equi) and Anaplasma platys. The former infects granulocytes (neutrophils and eosinophils) whereas the latter infects platelets. Another species of intracellular bacteria that infects dogs and belongs to the family Anaplasmataceae but segregates into a different part of the phylogenetic tree is Ehrlichia ewingii, which like Anaplasma phagocytophilum, infects granulocytes (and is the main differential diagnosis for the latter organism, producing similar disease syndromes). The organisms are transmitted by ticks, particularly Ixodes species, with rodents and deer serving as reservoir hosts (in the northeastern United States, white-footed mice are the implicated main reservoir of not only Anaplasma but also Borrelia burgdorferi). Transmission from the tick to an accidental host, like dogs, is thought to take 36-48 hours (so remove ticks as soon as you see them on yourself or your pets, particularly small brown “deer” ticks, which are Ixodes species). Tetracyclines are the treatment of choice for all Anaplasma infections. 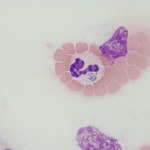 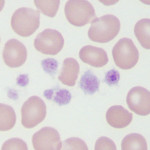