Changes in total and differential leukocyte count are usually grouped into patterns, which facilitate interpretation. These patterns are:

We have also provided useful tips on identifying the type of leukogram that is occurring (see below).

This is due to increased endogenous (or exogenous administered) corticosteroids. The classic leukogram pattern from increased corticosteroids (either exogenous or endogenous) includes a neutrophilia, lymphopenia, monocytosis, and eosinopenia. Not all of these changes will be present in any given animal. The most consistent finding is lymphopenia, followed by a mature neutrophilia (increase in segmented neutrophils, but not usually bands).  Monocytosis from corticosteroids is fairly common in dogs and is uncommon in cats, horses and cattle.

Causes of a stress leukogram are:

Other changes in clinical pathologic results that may be seen with a stress leukogram are:

This is due to epinephrine or norepinephrine and is called a “flight or fight” response. Changes on the leukogram due to epinephrine responses are most commonly seen in cats (of any age), young horses (1 year of age or less), and possibly younger animals of other breeds. The typical pattern is mild neutrophilia (mature cells with no left shift) and lymphocytosis (sometimes called a “physiologic lymphocytosis”). These changes are usually transient, and will diminish within about 30 minutes after the animal calms (Rose et al 1983).

Other changes in clinical pathologic results that may be seen with a physiologic leukocytosis are: 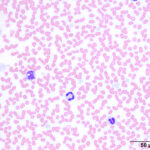 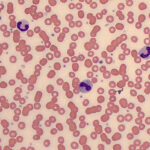 With the classic inflammatory leukogram, the bone marrow senses an increased demand for neutrophils (through cytokine stimulation). The bone marrow initially responds to this demand by releasing the storage pool of post-mitotic mature and band neutrophils, which results in a neutrophilia with a left shift (with fewer band than segmented neutrophils, i.e. not degenerative), in most species, other than cattle (which release earlier forms). Cytokines (such as granulocyte and granulocyte-monocyte stimulating factor) also kick in and stimulate granulopoiesis within 3-5 days. Thus, the following changes are seen with a classic inflammatory leukogram:

With overwhelming inflammation, the bone marrow is unable to release enough leukocytes to keep up with peripheral demand, leading to leukopenia. The typical leukogram pattern is:

Sequestered inflammation, such as a closed pyometra or an abscess, can result in a moderate to marked neutrophilia (with or without a left shift) and usually with little or mild toxic change (mimicking a paraneoplastic leukocytosis). There may be a concurrent monocytosis. Rupture of the lesion will result in a more severe inflammatory leukogram and corresponding clinical signs (i.e. can be life-threatening).

Acute endotoxemia results in a different hematologic pattern, which may vary between species.

Causes of inflammation are many and include:

Other changes in clinical pathologic results that may be seen with an inflammatory leukogram are:

Note that eosinopenia can be seen in experimental models of acute bacterial infection in rodents and rabbits, which decreased concentrations not being attributable to concurrent cortisol release (the decrease in eosinophils can precede the increase in cortisol concentrations, occurring quite rapidly within an hour, with a persistent decrease for up to 24 hours) (Bass 1975, Bass 1977, Bass et al 1980). Eosinopenia can also be a finding in severely ill patients with bacterial and viral infections (Davido et al 2017, Le Borgne et al 2021).

Terminology that you may encounter associated with inflammatory leukograms can be confusing, including degenerative and regenerative left shift. The key concept is: Is the bone marrow responding to the tissue draw or inflammation (release of cells or hyperplasia), is the response sufficient to combat the inflammation (hyperplasia in longer-standing inflammation) or is the inflammation winning (with or without hyperplasia)? We have provided a table below that hopefully gives a useful guideline on how we interpret changes in mature and immature neutrophil numbers (remember, there are exceptions to the rules). Note also that immature applies to all immature neutrophil stages that can be seen in blood (bands > metamyelocytes > myelocytes > progranulocytes, i.e. a proportionate left shift where more mature stages outnumber the more immature stages).

Both stress and inflammation can manifest with similar leukogram patterns, i.e. a mature neutrophilia (no left shift or toxic change), monocytosis and lymphopenia and eosinopenia (although all changes may not be present in every animal). Under these situations, it is unclear from a single hemogram, if the changes are due to stress or inflammation. In these cases, you should use other laboratory data (e.g. hyperglobulinemia, hypoferremia, hypoalbuminemia) and clinical data (e.g. fever) to decide which you think is more likely (or possibly both may be occurring). The degree of change may also be helpful as a stress leukogram is uncommon in species other than the dog and is usually associated with a mild increase in neutrophils. Measurement of sequential hemograms may also be helpful (to document improving or worsening inflammation or an absence of stress).

The following table may help with differentiating between leukogram patterns and are guidelines showing commonly seen changes (but not all scenarios are covered and there are species differences that cannot be put in the table). Note, that clinical information, results of other testing (e.g. imaging) and other clinical pathologic results will also assist with leukogram pattern differentiation (and there are exceptions to every rule).

Leukemia is defined as the presence of neoplastic cells in circulation and/or the bone marrow.  Leukemias are classified in two ways, by stage of maturation (acute or chronic) and by lineage (myeloid or lymphoid). There is also a third “designation” of leukemia, which is a leukemia that is secondary to lymphoma (an extramedullary tumor of lymphoid tissues) or what we call the leukemic phase of lymphoma (which means that the lymphoma is in the blood and/or bone marrow). The most common types of leukemia we see are chronic lymphocytic leukemia (CLL) and acute myeloid leukemia (AML), which can consist of any myeloid (non-lymphoid) lineage. Acute lymphoid leukemia (ALL) is less common in most species. Chronic myeloid leukemia (CML) is quite rare.

When interpreting WBC results on a hemogram, it is useful to ask the following questions:

Note, that a left shift in blood does not always mean there is a bone marrow response (myeloid or neutrophilic hyperplasia). A mild left shift in animals other than ruminants, can be seen with release of the storage pool in response to inflammation or if marrow reserves have been previously depleted. A more severe left shift is expected in ruminants in acute inflammation without a myeloid hyperplasia. Also, the lack of a left shift does not mean there is no myeloid hyperplasia. If the bone marrow is responding to granulocytopoietic cytokines or an inflammatory stimulus and is keeping up with demand, you may see no left shift at all, but you would expect to see a neutrophilia (high mature or segmented neutrophil count). You are also unlikely to see toxic change in neutrophils in this scenario because the marrow is keeping up with demand. This is typical in the case of sequestered inflammation or paraneoplastic leukocytosis, where tumor cells release granulocytopoietic cytokines.