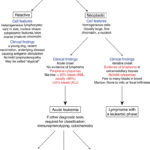 When a blood smear is scanned under low power magnification (usually 10x objective), variable numbers of large blue round cells (i.e. bigger than a neutrophil) may be encountered. These so-called “big blue” cells could be monocytes (including early forms such as promonocytes), early granulocytic precursors (e.g. progranulocytes), large reactive lymphocytes or neoplastic hematopoietic cells (as part of a leukemia).  Usually early myeloid precursors (promonocytes, progranulocytes) and monocytes can be distinguished from reactive lymphocytes or neoplastic hematopoietic cells by the characteristic features of the nucleus (more pleomorphic in a monocyte) or cytoplasm (numerous red granules for progranulocytes).

On the other hand, a major challenge is to discriminate between reactive lymphocytes and neoplastic hematopoietic cells (generally called ‘blasts” because their lineage is uncertain, i.e. they could be myeloid or lymphoid in origin). This decision is based on several findings, including the features of the cells, their numbers in blood, and clinical and hematologic data from the patient as outlined in the table below. When in doubt, clinical pathologists “fence sit”, i.e. they may write a lengthy description of the cells and not decide if they are reactive lymphocytes or neoplastic cells. In those circumstances, finding a reason for the presence of these cells in blood is indicated (i.e. look for hematopoietic neoplasia in other sites, including the skin) or, if no reason is found, repeat testing to see if the finding is persistent. Reactive lymphocytes usually are a transient finding in blood, particularly if the primary disease process has been resolved. Note, that some people use the term “atypical lymphocytes”. At Cornell University, we avoid this term because it is of uncertain meaning and uninformative. We prefer to decide if the cells are neoplastic or reactive or if we need to “fence sit”, then we just provide a comment describing our thoughts on the cells in blood.

For additional information (and images) on differentiating reactive from neoplastic cells in blood, see related linnks.