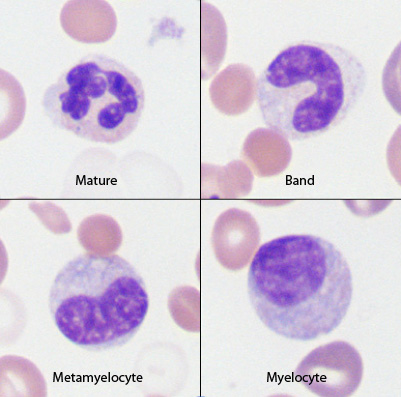 Immature neutrophils are primarily distinguished from each other by nuclear features, i.e. immature cells lack nuclear segmentation, with decreasing indentation with more immaturity. Neutrophil maturation progresses from the progranulocyte stage through myelocyte, metamyelocyte, band and mature neutrophil stages, with each successive division resulting in slightly smaller cell with more nuclear constriction and less cytoplasmic RNA (blue color in cytoplasm). Segmented or mature neutrophils have clear constrictions or segments (A). Bands (the most “mature” immature stage) have a horse-shoe shaped nucleus with no deep indentations (<50% of the width of the nucleus) (B). They can have slighter bluer cytoplasm than mature cells (more RNA). The next immature stage before band is the metamyelocyte which has a kidney bean shaped nucleus, which is generally eccentric in the cell (C). This an also have bluer cytoplasm than the mature neutrophil. A myelocyte (one stage less mature than the metamyelocyte) has a round eccentric nucleus, but the same cytoplasmic characteristics as all the other neutrophils (D). 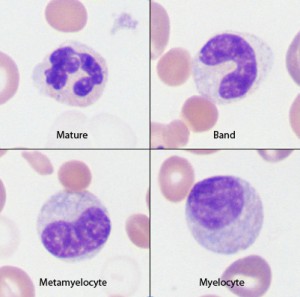