Red blood cell inclusions can arise from a variety of sources. Correct identification of these abnormalities is important since it can provide insights into metabolic, physiologic, and pathologic conditions affecting the red blood cells. 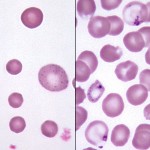 Basophilic stippling represents the spontaneous aggregation of ribosomal RNA in the cytoplasm of erythrocytes. These aggregates stain, and hence are visible, with routine hematology stains.

Basophilic stippling of erythrocytes may be seen in the following conditions: 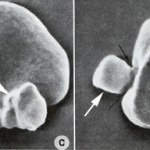 Oxidation of exposed sulfhydryl groups on hemoglobin causes formation of disulfide bonds and distortion of the tertiary structure of the hemoglobin molecule. The result is precipitation of hemoglobin, which may then coalesce to form intracellular inclusions called Heinz bodies. Small, non-pathologic “endogenous” Heinz bodies can be found in blood of many healthy cats, but their presence is abnormal in other species. Increased numbers of these “endogenous” Heinz bodies are found in cats with diabetes mellitus (associated with ketone production), lymphoma and hyperthyroidism. Although many of these cats are not anemic, their red blood cell lifespans are reduced and they have lower hematocrits than cats with the same disease but lower numbers of Heinz bodies.

Heinz bodies may be seen in Wright’s stained smears, especially if they are large and distort the red cell membrane. In contrast, small “endogenous” Heinz bodies, such as those that can be seen in cats, are harder to visualize. Heinz bodies can be easily observed with supravital stains, such as new methylene blue, as illustrated in the picture below.

Extensive Heinz body formation and attachment to the membrane increase the rigidity of the red blood cells and render them susceptible to fragmentation and entrapment in the spleen where they are phagocytized. 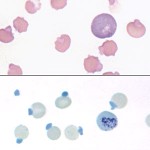 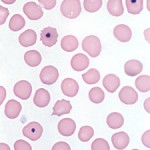 Howell-Jolly bodies (also called micronuclei) are small fragments of non-functional nucleus which were not extruded as the erythrocyte left the bone marrow. Usually, but not always, the host erythrocyte contains only a single Howell-Jolly body, which appears as a blue, perfectly round inclusion. Occasionally, uneven staining of an Howell-Jolly body can result in a ring-like appearance which may mimic a parasite.

In dogs and ruminants, Howell-Jolly bodies are not routinely observed in peripheral blood because they are removed from red blood cells by the pitting function of the sinusoidal spleen.

Howell-Jolly bodies can be seen in the following situations: 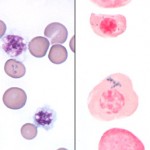 Siderocytes are anucleate erythrocytes with iron-containing (siderotic) cytoplasmic inclusions.  The inclusions can be due to aggregates of iron in the cytoplasm or within mitochondria (the latter are called Pappenheimer bodies). A nucleated erythoid cell with the same inclusions (usually within mitochondria) is termed a sideroblast. Siderocytes should be distinguished from basophilic stippling (aggregates of RNA) because they mean different things. Generally, siderocytes have small focal accumulation of light blue to grey material, whereas basophilic stippling is more chunky and diffusely distributed throughout the cytoplasm. Siderocytes will also stain blue with Prussian blue reaction (detects ferric iron), if the iron is in sufficient amounts to readily visualize (small amounts do not stain well with Prussian blue).

Increased numbers of siderocytes may also be seen in connection with: