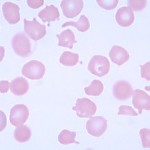 The diagnostic relevance of poikilocytes is number-, shape- and context-dependent. Low numbers of misshapen red blood cells can be seen in blood from clinically normal or ill animals and may not be of diagnostic relevance. However, in some situations, low numbers can be helpful. For instance, a few schistocytes in a sick dog with thrombocytopenia should raise suspicion of fragmentation injury, secondary to disseminated intravascular coagulation (DIC). Testing for this hemostastic disorder could be considered, depending on what is wrong with the dog. The presence of moderate or many misshapen cells is likely to be of more clinical relevance and can actually yield clues as to the cause of anemia in affected animals.  For instance, many eccentrocytes and Heinz bodies in an anemic animal indicate oxidant injury and a search for an oxidant (e.g. zinc in dogs, acetaminophen in cats, red maple leaf in horses) should be instituted in such patients. In other instances, many poikilocytes may be an expected or “normal” finding (e.g. certain species of goats, young calves).

In all cases, the fullest interpretation of red blood cell changes can be made only in light of the other parameters of the hemogram, along with pertinent clinical, historical, and laboratory findings. Evaluation for significant shape abnormalities requires a well-made blood film prepared from fresh blood, so that artifactive shape changes are not superimposed upon any of potential pathologic significance.

Acanthocytes (or spur cells) are spherical cells with blunt-tipped or club-shaped spicules of different lengths projecting from their surface at irregular intervals. These morphologic changes are most frequently seen in dogs and cats, where they are of diagnostic relevance. They can be seen in other species (cattle, horses) and are of less certain meaning in these species (no specific disease associations have been made with these red blood cell changes). Acanthocytes are less resistant to osmotic lysis and more rigid than normal red blood cells. Due to their rigidity, they probably have a shorter life span than normal, resulting in a mild hemolytic (extravascular) process, which may or may not manifest as an anemia (depending on the number of acanthocytes and the ability of the bone marrow to respond to their premature removal and maintain a normal hematocrit). 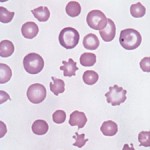 Acanthocytes are thought to occur through two main mechanisms:

Acanthocytes are an important finding, because they can provide clues as to the presence of underlying disease in the animal. However, just as for any other shape change, low numbers may not be clinically relevant or diagnostically useful. They can be seen in the following conditions: 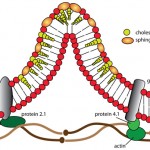 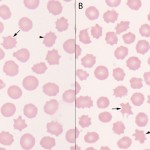 Because they indicate different pathologic processes, acanthocytes must be differentiated from echinocytes, which are also spiculated cells (see images to the right). However the nature of the spiculation, specifically the shape, size and distribution about the membrane differs.  The spicules in acanthocytes are more variable in shape (frequently blunt or bulbous ended), vary in size (height above the membrane and width, particularly along the length of the projection) and are unevenly distributed around the membrane. Echinocytes, or crenated red blood cells, in contrast, have shorter, usually sharp blunt spicules of uniform length which are more evenly spaced around their periphery. In some species (those with smaller red blood cells, such as horses and cats), echinocytes may have blunt ends. So in essence, acanthocytes are irregularly spiculated cells and echinocytes are regularly spiculated cells. 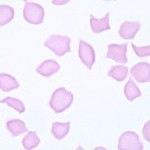 Drepanocytes are sickle-shaped erythrocytes that occurs in certain deer breeds (excluding reindeer and Montjac deer), antelope, some breeds of sheep (e.g. Barbary), goats, antelope, mongoose and genet. The sickling in deer (and probably other species) is an in vitro phenomenon due to variants of hemoglobin (hemoglobin II, alone or in combination with hemoglobin I, III, or IVb) which form insoluble, elongated polymers when in the oxygenated state. The changes are seen in blood exposed for more than a few seconds to atmospheric oxygen, e.g. during mixing of a blood sample or blood smear preparation. Alkalosis can also induce red blood cell sickling, and the in vitro sickling can be prevented by acidification of the blood. Of course, sickling of red blood cells in a human patient is seen in sickle cell anemia, a genetic defect in hemoglobin (a single point mutation in the β-globin gene, in which hydrophilic glutamic acid is substituted for hydrophobic valine, resulting in the formation of a mutant hemoglobin, called hemoglobin “S”). There are mutant mouse models of sickle cell disease, but this hemoglobin defect has not been reported to occur spontaneously in animals.

Electron microscopy of a pyknocytes with a membrane tag.

Eccentrocytes on a blood smear from a dog with onion toxicosis.

Eccentrocytes form under conditions of excess oxidant stress to the erythrocytes, which induces cross-linking of membrane proteins. Often (but not always), they are seen in association with Heinz bodies, which provide evidence of an oxidant effect on hemoglobin. Eccentrocytes are seen in the following conditions:

Note that when the thin membrane of the eccentrocyte is removed or ruptures, a small cell which lacks central pallor is formed. These spherocytic cells are termed “pyknocytes” and can be mistaken for spherocytes under light microscopy. Electron microscopy usually reveals the membrane “tags” (whereas spherocytes are uniformly spherical) as shown in the image. 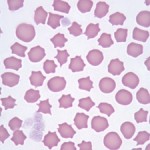 Echinocytes in freshly-collected blood from a horse with colic.

Echinocytes are spiculated RBCs. The term crenation (or “burr” cell) is also used to refer to cells of this type, particularly when the spicules are sharp and the echinocytes are an artifactual change.  The projections of the cell membrane may be sharp or blunt, are usually numerous, and tend to be evenly spaced around the circumference. Spicules are usually of uniform size which differentiates echinocytes from acanthocytes (which have irregularly sized spicules, irregularly spaced around the cell membrane). Echinocytes form under the following settings:

Unfortunately, because echinocytes are frequently seen as an artifact (usually in stored or “old” blood), they are considered of little pathogenic relevance in most cases. However, they can provide some useful diagnostic information in the appropriate context (those disease conditions listed above) and should not be summarily ignored. 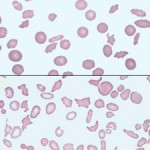 Blood smears from a cat with hepatic lipidosis

Elliptocytes are elongated red blood cells. There are three types: Type I is a slightly oval-shaped cell (used to be called ovalocyte), type II is a more rounded to oval shaped cell and type III is an elongate elliptical cell. Distinction between these three types is not of clinical relevance, however some forms occur more frequently in some diseases. An occasional elliptical or oval erythrocyte may be seen as a non-specific finding in a variety of settings. In some cases, smear-making technique and/or plasma viscosity may be contributing factors in their in vitro formation. Elliptocytes can indicate underlying diseases, which are listed below.

Keratocytes are erythrocytes with a blister-like vesicle, which may rupture, leaving a “bite-shaped” defect in the cell outline or one or two horn-like projections on the same side of the cell. This process may occur more than once for a given cell, resulting in very irregular shapes.

Keratocytes from a dog with microangiopathy.

Low numbers of keratocytes may be seen in various situations and may not have any clear clinical significance (e.g. healthy cats may have a few keratocytes in blood). When present in larger numbers or with other poikilocytes, keratocytes can indicate the following: 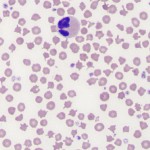 This generic term is used when the red blood cell shape changes are so varied, that using specific terms does not provide additional diagnostic meaning. The term is rarely used in dogs (because we can usually identify the specific shape change, such as acanthocyte, which has more diagnostic meaning than the generic term of poikilocyte) and is usually only applied to the following species (and situations): 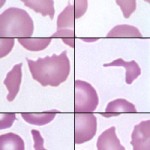 Schistocytes, or red blood cell fragments, are generally taken to reflect mechanical injury to erythrocytes. A wide variety of forms may be observed.

Usually seen in relatively low numbers, they are associated with conditions in which the normally smooth endothelial lining is roughened or irregular, the vascular lumen is crossed by strands of fibrin, or blood flow is turbulent. Disseminated intravascular coagulation, glomerular disease, vasculitis, portosystemic shunts and vascular neoplasms (e.g. hemangiosarcoma) are among the many conditions in which red blood cell fragmentation may be seen in varying degrees. Schistocytes are seen in up to 60-75% of dogs, but are rarely seen in cats and other species, with disseminated intravascular coagulation (in cats, schistocytes are most commonly observed as part of the poikilocytosis in liver disease).

Schistocytes also are commonly seen as a feature of  iron deficiency anemia, but in this instance the fragmentation likely results from inherent mechanical fragility of the cells produced under these conditions than from changes in the vasculature. 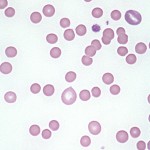 Spherocytes in a dog with IMHA

Spherocytes are erythrocytes which have assumed the form of a sphere rather than the normal discoid shape. As a result, they appear on routine blood films as cells that are smaller and more dense than normal red blood cells of the species, and have a reduced area of central pallor. Because cats, horses and cattle normally have red cells with little central pallor, recognition of spherocytes is more difficult in these species than in dogs, whose normal red blood cells have distinct pale centers. Note that even though spherocytes appear smaller than normal red blood cells on a blood smear (because you are assessing diameter of cells on a smear, not volume), in most cases, they have normal volume and do not change the mean cell volume (MCV).

There are several causes of spherocyte formation and numbers do matter to some extent. Moderate to marked spherocytosis is diagnostic of immune-mediated hemolytic anemia (IMHA). Low numbers of spherocytes can be seen in conditions other than IMHA, therefore the presence of spherocytes (especially if in low numbers) is not always indicative of IMHA. 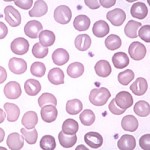 Stomatocytes are erythrocytes with an elongated (mouth-like) area of central pallor. An occasional cell of this type might be seen as a non-specific finding in a variety of situations, such as regenerative anemias, liver disease, and lead poisoning. Stomatocytes can also be an artifact in a blood smear that is too thick. They can also be a marker of inherited red blood cell defects in dogs. 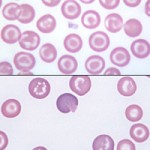 Target cells in a dog.

Target cells (codocytes or leptocytes) have a “lump” of hemoglobinized cytoplasm within the area of normal central pallor, causing them to resemble a “bullseye” target. The ability to assume this form is said to reflect an increased surface to volume ratio. Their deformability is similar to that of normal cells and they are more resistant to osmotic lysis. These cells are only really observed in dogs.

Young erythrocytes, as a normal feature, have excess membrane relative to mature cells; therefore, polychromatophilic target cells are often seen in the context of a regenerative anemia. Hypochromic cells, in iron deficiency anemias, also can assume a target appearance because the cells have larger diameters with decreased cell thickness. In these situations, the presence of target cells in a blood smear does not provide any additional diagnostic information.

Increased numbers of normochromic target cells can be a useful diagnostic indicator of pathologic conditions resulting in a balanced increase in cholesterol and phospholipid in the redblood  cell membrane. The most common disorder associated with normocytic normochromic target cells is liver disease. Hypothyroidism is another condition where this can occur and could be related to high systemic cholesterol concentrations that are seen in this disorder in dogs.