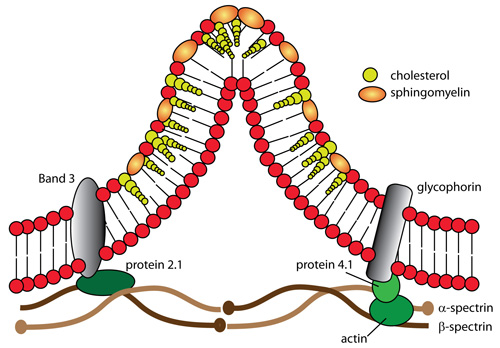 Acanthocyte formation is classically seen in humans with liver disease or abetalipoproteinemia (an inherited disorder of cholesterol metabolism). In severe liver disease, there is an abnormally large amount of cholesterol in the outer portion of the red cell membrane, causing the membrane to fold into irregular projections as the red cells move through the splenic sinusoids. In abetalipoproteinemia, the mechanism of acanthocyte formation is different. Due to the absence of apolipoprotein B (which is required for absorption and metabolism of lipoproteins, such as chylomicrons, VLDL and LDL) and low plasma triglycerides, there is a relative increase in the phospholipid, sphingomyelin, in the outer red cell membrane. This abnormal phospholipid ratio changes the contours of the red cell membrane, which is further remodeled in the spleen. Both mechanisms (accumulation of cholesterol in liver disease and accumulation of sphingomyelin in abetalipoproteinemia) are illustrated in the image above. 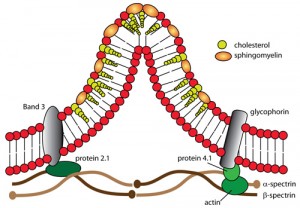