Hypochromasia indicates that the red blood cells have less hemoglobin than normal and the term, hypochromasia, is used in two contexts: 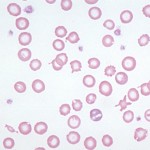 Hypochromasia in a dog 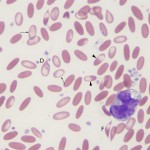 Hypochromasia in an iron deficient camelid. 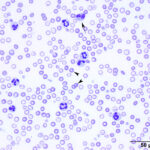 Hypochromasia in a dog

For all practical purposes, true hypochromasia in common domestic animal species occurs only in the context of advanced iron deficiency anemia.

It is recognized most frequently in dogs and camelids. In both species, the iron deficiency is attributed to chronic gastrointestinal hemorrhage. In the dog, hemorrhage from colonic vascular ectasia and bleeding ulcers (e.g. corticosteroid or non-steroidal anti-inflammatory drug treatment or gastrointestinal tumors are common causes of iron deficiency anemia. In the camelid, iron deficiency anemia has been attributed to gastrointestinal blood loss associated with the blood-sucking strongyle parasite, Haemonchus contortus (“barber’s pole” worm). Hypochromasia in advanced iron deficiency is accompanied by erythrocyte shape abnormalities suggesting fragmentation (schistocytes, keratocytes, acanthocytes) in the dog. This may result from diminished deformability of the iron deficient cells, because they are thought to be more rigid than normal (mechanically fragile). In camelids, fusiform (acuminocytes) and tear-dropped shaped (dacryocytes) red blood cells are common concurrent findings in iron deficient anemia (see image above), however the mechanism of formation of these poikilocytes is unknown. 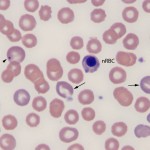 Polychromasia in a dog with a regenerative anemia due to blood

Polychromasia is a feature of immature anucleate erythrocytes (which are also aggregate reticulocytes) in the blood. The immature RBC are blue because they contain moderate to large amounts of RNA (ribosomes, polyribosomes) which offsets the red of hemoglobin, imparting a purple color to the cells. In many species, once the cell reaches the reticulocyte stage, it remains in the bone marrow for about 2 days, then is released to complete its maturation by losing its RNA and some of its surface membrane while it circulates. This is usually accomplished in the spleen. Consequently, low numbers of polychromatophils are seen in healthy dogs (< 1.5% reticulocytes). Immature a nucleate RBC with RNA are not released from the marrow in normal horses and ruminants. In all species, other than the horse, the degree of polychromasia in a blood smear is a good guide as to whether the bone marrow is responding (by releasing immature anucleate RBC) to an anemia, i.e. the anemia is regenerative if there are sufficient polychromatophils present. The horse (and other equine) is an exception as they do not typically release polychromatophils in response to an anemia (they release cells that are larger than normal, called macrocytes). In dogs and cats, the number of reticulocytes can be quantified as a percentage or an absolute count. 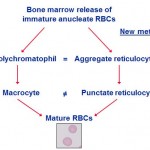 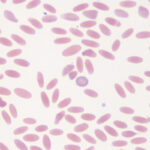 Assessment of reticulocytes help determine if an anemic patient has a healthy marrow response to the anemia as would be indicated by increased numbers of young red cells produced to replace lost red cells. Interpretation of the reticulocyte count differs with species. 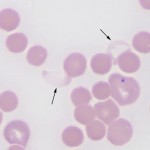