The HCT is a calculated result itself, so you can use the primary components of the HCT to rearrange the above formula to:

Unlike the MCH, this measurement does take into account the volume of the RBC and represents the average concentration (weight/unit volume) of hemoglobin in RBCs. When the HCT is used for the calculation, it will be influenced by changes in the MCV and RBC count (see formula above). In an animal with a regenerative anemia with numerous polychromatophilic RBCs that are larger than normal (increased MCV) but contain less hemoglobin than normal (because they are immature), the MCV and MCH will track high together (MCH being dictated by the larger cell volume), whereas the MCHC will reflect the true low hemoglobin concentration in the cells (tracking low). Similarly, in an animal with small RBCs and a low MCV, a low MCH may reflect smaller RBCs with normal hemoglobin or less hemoglobin. A normal MCHC would reflect smaller cells with normal hemoglobin whereas a low MCHC would reflect smaller cells with less hemoglobin. The latter is often seen in iron deficiency anemia. 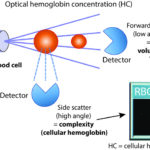 The ADVIA hematology analyzer also provides a CHCM, which is the mean of the optically measured hemoglobin concentration within the cells, i.e. per unit volume (g/dL), and, like the MCHC, takes into account the volume of the cell. With the CHCM, instead of the hemoglobin being measured spectrophotometrically after the RBCs are lysed, the hemoglobin content only within intact RBCs is optically measured based on the degree of laser light the RBCs scatter in a side direction (high angle light scatter, also called internal complexity) as they pass in single file through a laser beam in a flow cell. The cell volume is also simultaneously measured by the degree of forward (low angle) scatter (see image to the right) and the hemoglobin content per cell is converted to a concentration (content per unit volume). The CHCM can be considered the optical equivalent of the MCHC of intact RBCs. This measurement cannot be done on RBCs that have lysed.

This is summarized below.

MCHC and CHCM are measured in g/dL (conventional units) or g/L (SI units). The conversion formula is as follows:

EDTA is the preferred anticoagulant.

The MCHC is unstable. It can either decrease (storage-associated RBC swelling, which increases the MCV) or increase if there is RBC lysis in vitro with storage.