Hematocrit (HCT) and packed cell volume (PCV) are used to measure red blood cell mass. An increase in red blood cell mass is equivalent to erythrocytosis and a decrease indicates an anemia. Because HCT and PCV are affected by changes in water, the HCT and PCV may be high due to water losses in a dehydrated animal (depending on the extent of dehydration). This can normalize a HCT/PCV in an anemic animal or may increase the HCT/PCV above the upper reference limit in a non-anemic animal, resulting in a relative erythrocytosis.

Both are expressed as % of the blood (SI units are L/L). The conversion formula to SI units is as follows

EDTA is the preferred anticoagulant. Although citrate can be used, the volume of citrate in the tube (10% of the collection volume) will dilute the PCV or HCT accordingly. Heparinized whole blood can also be used.

HCT and PCV are optimally stable for 24 hours at 4°C. After this time, RBC tend to swell which increases the MCV, falsely increasing the HCT and PCV potentially (RBC do not pack as well). Also red blood cells start to hemolyze with storage, resulting in false decreases in both the HCT and PCV.

Studies in lactating and non-lactating dairy cows show an average difference in PCV of 4% and 2%, respectively, in blood taken from the jugular vein and mammary gland, with lower PCV in the mammary gland (Fisher 1962). 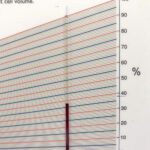