The mean cell volume (MCV) indicates the volume of the “average” red blood cell (RBC) in a sample. It is expressed in femtoliters (fL; 10-15 liters). Traditionally, MCV was a calculated index, based on the packed cell volume (PCV) and RBC count (RBC) derived by using the following formula: 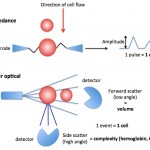 Present-day automated hematology analyzers provide a more accurate, direct measure of MCV, based on the actual volume of the cell as it passes through a laser (laser-based hematologic analyzers) or an electronic beam (“impedance” methods). The amount of laser light scattered in a forward direction or the amplitude of pulses created in the electronic field as the cells through the detector is equivalent to the cell volume, which is averaged based on the number of cells analyzed by the instrument. The instruments also “channelize” the scatter or impulses, segregating them into channels representing relative ranges of cell volume. This is illustrated as a frequency distribution curve or histogram (see image below). The variation in RBC volume provides the measurement, the red blood cell distribution width (which equals the coefficient of variation of the RBC volume or the standard deviation of RBC volume ÷ MCV). 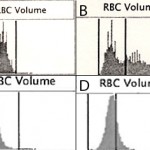