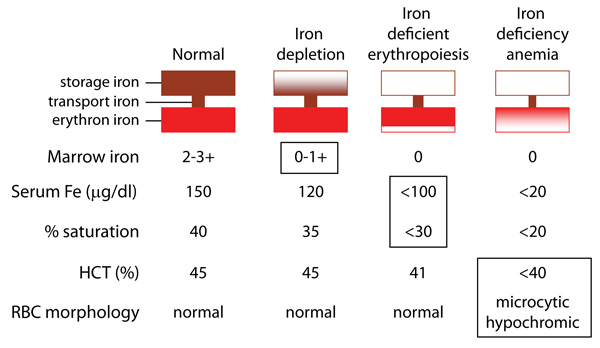 1. Iron depletion: The first thing that occurs is decreased bone marrow iron (seen as hemosiderin on Prussian-blue stained bone marrow smears) as iron stores are used to maintain erythropoiesis. This is associated with low ferritin (in man), normal iron and % saturation with no anemia. Since ferritin correlates weakly to iron stores in animals, this parameter should not be relied upon as a reliable indicator of bone marrow iron stores.
2. Iron-deficient erythropoiesis: Iron stores in marrow are absent, iron and % saturation are beginning to decrease below reference intervals and iron-deficient erythrocytes are being produced. There is no anemia (HCT dropping or normal but not below reference intervals). These iron-deficient erythrocytes can sometimes be detected using sensitive flow cytometric-based hematology analyzers.
3. Iron deficiency anemia: Iron deficiency anemia develops. When fully manifest, this is characterized by microcytosis (when sufficient microcytic cells are produced) and hypochromaisa. However, an iron deficiency anemia can still be present (and harder to diagnose) when the red blood cell indices are still normocytic normochromic. 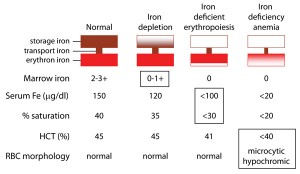