Reticulocytes are immature, anucleate erythrocytes which are released from bone marrow into the blood in increased numbers as a response to anemia caused by hemolysis (destruction) or loss (hemorrhage) of erythrocytes in most species (horses are a notable exception).

Identification of reticulocytes allows assessment of whether bone marrow is responding to an anemia (given sufficient time) by increasing red blood cell (RBC) production; this is termed a regenerative response. Reticulocytes can be detected by virtue of the presence of RNA in the form of ribosomes and rough endoplasmic reticulum in their cytoplasm. The more immature the cell, the more RNA it contains. In contrast, mature red blood cells, which are no longer synthesizing hemoglobin, contain very small amounts or no RNA (they are essentially small sacs of hemoglobin).

The RNA can be detected in immature red blood cells in several ways: 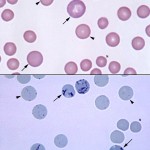 Regenerative anemia in a cat

Depending on their RNA content, reticulocytes can be detected with routine Romanowsky-based polychrome stains (eg, Wright’s, DiffQuik) used for staining blood smears. RNA (or DNA) stains blue with these dyes, whereas hemoglobin stains red. When the immature red blood cells contain large amounts of RNA, the blue mixes with the hemoglobin to yield a purple color and the cells are termed polychromatophilic red blood cells. These polychromatophils correspond to aggregate reticulocytes. Thus, we can examine a blood smear for the presence of polychromasia to assess if the marrow is responding to an anemia in most species, other than the horse or equine species. Indeed, the proportion of polychromatophils can be used as a rough guide to estimate the reticulocyte count.

In contrast to aggregate reticulocytes, punctate reticulocytes will stain red and not purple because they only contain small amounts of RNA (the hemoglobin dominates). Therefore, they are a lot harder to identify on a regular blood smear. Punctate reticulocytes can be larger than normal (until they are remodeled by splenic macrophages as they recirculate), i.e. they can be macrocytes, and may be detected on routine blood smears by their larger size. Unfortunately, there are other causes of large red blood cells so not all macrocytes are punctate reticulocytes and we do not rely on these cells to evaluate the regenerative response in most species (the horse is an exception).

Reticulocytes are only quantified routinely as a percentage in dogs and cats. An increased percentage (and absolute) reticulocyte count indicates a drive for erythropoiesis and attempted regeneration.

There are additional formulae that can be used to quantify regeneration, including the corrected reticulocyte percentage and reticulocyte production index (these are found under the absolute reticulocyte count page as well as the page on assessing regeneration). The latter two results are not usually provided on most hemograms, but can be calculated in-house from hemogram results.