These are larger red blood cells than normal. Macrocytes have a normal content of hemoglobin and very little RNA. In fact, there is insufficient RNA (blue) to offset the red of hemoglobin, so macrocytes are red in color. This differs from polychromatophilic RBC which are usually larger and purple because they contain more RNA. Detection of macrocytes requires the presence of cells of normal size in the blood. If all the cells are macrocytic, it is difficult to recognize that they are larger than normal (i.e. there is nothing to compare them to). 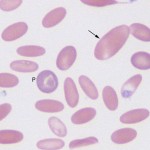