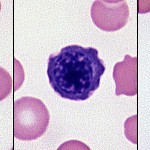 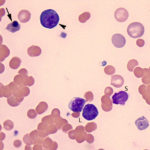 Nucleated RBC are usually not seen in the blood of healthy mammals (low numbers may be seen in dogs and camelids, but are rarely normally seen in other species). The most common type of nRBC seen in blood is the fully hemoglobinized or orthochromic metarubricyte (a cell with red cytoplasm and a small pyknotic nucleus). However, polychromatophilic metarubricytes and even earlier stages (basophilic rubricyte, which has purple to blue-purple cytoplasm and a somewhat viable nucleus) may be seen in blood as well, depending on the cause. When nRBCs are increased in blood, it is called a normoblastosis, erythroblastosis or metarubricytosis (the latter is the least preferred term as it only refers to the most mature form of nucleated RBC – the metarubricyte – when even earlier forms may be seen as well). 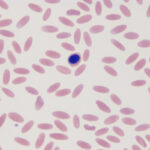 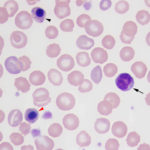 Nucleated RBC must be distinguished from lymphocytes, which they can closely mimic in blood. In fact, hematologic analyzers frequently count nRBC as lymphocytes resulting in inaccurate automated differential leukocyte counts and a measured “WBC” count. When nRBC are present in blood, they are included in the measured “WBC” count and the WBC count must be corrected for the number of nRBC. For more information on this and causes of increased nRBC in blood, refer to the nRBC test page. In fact, the human eye is better than the machine because we can pick up features in the cells, which help us distinguish between these cell types.  Features that are typical of nRBC are: 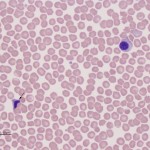 Nucleated RBC must also be distinguished from apoptotic white blood cells (WBC). Apoptotic cells can be due to storage of blood or may be seen in fresh blood in animals with heat stroke or drugs that cause apoptotic or oncotic death of WBC. It can be difficult to differentiate the two but essentially the cytoplasm of the apoptotic cell mimics the cell of origin. For neutrophils (which usually die the quickest), the cytoplasm is colorless to light pink and may contain granules. In contrast, the nRBC should have smooth uniform red, purple (or infrequently blue) cytoplasm.