The kidney has many roles, including:

Most nitrogenous waste is formed by protein catabolism, which is excreted into the urine via glomerular filtration (urea and creatinine are both freely filtered through an intact glomerulus). Amino acids are converted to urea through the urea cycle in the liver. Urea is the main mechanism by which mammalian species excrete nitrogenous waste (uric acid is the main excretory product in birds and reptiles), being produced from ammonia in the liver. 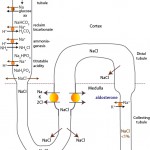 Sodium is filtered and passively resorbed with water along a concentration gradient in the proximal convoluted tubule. The concentration gradient is established by a basolateral Na+/K+-ATPase pump which pumps 3Na+ out of the renal tubule cell in exchange for 2K+. In the PCT, Na+ is cotransported with glucose, amino acids, bicarbonate (NHE3 trasnporter) and phosphate (called titratable acidity). Sodium absorption with bicarbonate retains >80% of all the filtered bicarbonate (with the rest resorbed lower down in the kidney). Sodium absorption concurrently promotes acid excretion in the proximal tubule (and bicarbonate retention; see diagrams under acid-base below). In the thick ascending limb of the loop of Henle, a Na-K-2Cl carrier transports Na+ without water into the medullary interstitium. This is the primary mechanism for establishment of the medullary concentration gradient, which is essential for water resorption. Sodium not absorbed in the loop of Henle is delivered to the distal nephron, where it is also absorbed in the early distal tubule (via a sodium chloride cotransporter called NCC) and then, what is termed the “aldosterone-sensitive distal nephron”, in the late distal tubule and collecting tubules and ducts. In the collecting tubules and ducts, Na resorption occurs via 3 mechanisms: a) A sodium transporter (ENaC) in the apical membranes of principal cells, which is linked to the exchange of potassium in the late distal tubule; b) The sodium transporter in principal cells, but here Na absorption is linked to paracellular Cl absorption (maintaining electroneutrality); and c) With chloride with a pendrin transporter-containing intercalated cells. The last two mechanisms will spare concurrent potassium excretion. 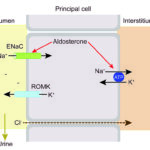 The sodium transporter’s ENaC activity is increased by:

Chloride resorption is both active and passive and both are indirectly linked to Na+ absorption (see above diagram for details). Some active absorption of Cl– (in exchange for formate) occurs in the proximal tubules, which is driven by the Na+/H+ antiporter at the tubule lumen. Passive absorption of chloride occurs along a concentration gradient established by sodium absorption without chloride in the first part of the proximal tubule. The early PCT is relatively impermeable to chloride, increasing the intraluminal Cl– concentration. Cl– is passively absorbed, with sodium, through leaky tight junctions in the later segments of the proximal tubule along a concentration gradient. Also, absorption of water in the proximal tubule causes passive Cl absorption via solvent drag (through the permeable tight junctions). Chloride is also actively resorbed in the loop of Henle with the Na-K-2Cl carrier (i.e. two chlorides are brought in with one potassium and one sodium, which is why loop diuretics can cause a metabolic alkalosis through loss of chloride). Chloride is also absorbed with sodium in the early part of the distal tubules (NCC carrier) and in exchange for bicarbonate in type B intercalated cells in the collecting duct (via pendrin, a chloride/bicarbonate exchanger, which is found at the apical or luminal aspect of the membrane). As indicated above, chloride is also absorbed with the sodium transporter, ENaC, in the late distal tubule through a paracellular mechanism involving claudin-4 and claudin-8.

Chloride delivery to the macula densa cells in the distal tubules is important for control of sodium resorption. Decreased chloride delivery (e.g. hypochloremia) results in reduced NaCl absorption in the macula densa and stimulates the renin-angiotensin-aldosterone system, which promotes NaCl (angiotensin II stimulates the sodium/hydrogen antiporter in the proximal tubules and aldosterone opens sodium channels in the distal tubule) and water resorption (which follows sodium). Loss of chloride with loop (which block the NaK2Cl transporter) or thiazide (block the NaCl transporter in the early distal tubule) diuretics may result in a primary metabolic alkalosis by increasing distal sodium delivery to the collecting tubules and ducts, so it is absorbed by the sodium transporter in the principal cells, thus stimulating hydrogen (and potassium excretion). Again, chloride is the best treatment for an alkalosis induced by loop diuretics.

Two-thirds of filtered potassium (K+) is resorbed in the PCT. Some is absorbed in the loop of Henle with NaCl by the Na-K-2Cl carrier. In the DCT and collecting ducts, K+ is excreted passively. In the late distal tubule and collecting tubules, K is also excreted actively through potassium channels (renal outer medullary potassium channel or ROMK and maxi-K channels, the latter of which are triggered by increased distal tubular lumen flow rate) by principal cells. The ROMK channels excrete potassium in exchange for sodium in the collecting tubules because sodium resorption through ENaC by the  principal cells creates a negative lumen potential, favoring potassium excretion down the electrochemical gradient (even if potassium is already depleted). Thus sodium resorption with aldosterone  seems to be the main driving force for potassium excretion at this site. The excretion of K+ is affected by the following:

Only ionized calcium is filtered. Calcium is mostly resorbed passively in the PCT (80-85%) following sodium and water resorption. In the thick ascending limb of the loop of Henle and DCT, parathyroid hormone stimulates calcium resorption. Vitamin D has a minor effect on calcium resorption in the DCT (by increasing calbindins, calcium-binding proteins in the renal cells).

Most of the filtered phosphate (80-95%) is resorbed in the PCT with sodium, which is influenced by the following:

80% of magnesium (ionized only) is filtered, most of which is resorbed in the thick ascending limb of the loop of Henle (70%), with lesser amounts in the PCT (20-30%) and DCT (10%). Magnesium resorption is influenced by ADH, PTH (stimulates absorption), glucagon, calcitonin, and β-adrenergics. The exact mechanisms involving magnesium homeostasis are poorly understood.

Urine concentration is the formation of urine that is hyperosmotic to plasma (plasma has an osmolality of approximately 280-320 mOsm/kg), by resorption of water in excess of solute. Urine dilution is the formation of urine that is hypo-osmotic (< 300 mOsm/kg) with respect to plasma by excretion of water with retention of solute. Both concentration and dilution require correct functioning of the renal tubules. The ability of the kidney to concentrate or dilute urine is assessed by urine osmolality or specific gravity. 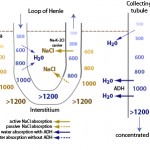 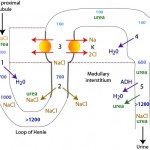 The formation of dilute or concentrated urine is achieved via the countercurrent mechanism which includes the loop of Henle, the cortical and medullary collecting tubules and the blood supply to these segments (vasa recta). Urine concentration or dilution is dependent upon formation of a hypertonic medullary interstitium and the absorption of water in the collecting tubules. Optimal renal concentrating ability is dependent on a number of factors, most important being establishment of the concentration gradient in the interstitium of the renal medulla and antiduiretic hormone (ADH).

Therefore, the tubules have the capacity to dilute AND concentrate urine!! Proximal tubules and loop of Henle create a dilute urine whereas the distal/collecting tubules and ADH create a concentrated urine. Defective renal tubule function with an inability to concentrate or dilute urine will result in isosthenuric urine (or a fixed urine specific gravity of 1.008-1.012), regardless of hydration status. This helps confirm renal disease (due to tubular dysfunction) in an animal. However, factors other than renal tubular disease will alter renal concentrating ability. These factors affect the establishment of the medullary interstitium osmotic gradient (called medullary solute washout) or the ability of ADH to do its job and can result in urine that is inappropriately concentrated (less than “adequate” concentrating ability) in a dehydrated or azotemic animal. In some cases, urine may be hyposthenuric (<1.008). A complete lack of ADH typically results in hyposthenuric urine as the tubules can dilute but not concentrate the urine. These factors are listed below:

For a summary of the players involved in water balance, please go to the fluid changes page under electrolytes.

The kidney is essential in maintenance of acid-base balance and a stable pH, which is accomplished by regulating hydrogen excretion so that plasma bicarbonate remains within appropriate limits. Also, changes in renal hydrogen excretion or bicarbonate retention are important compensatory mechanisms for alterations in pH secondary to respiratory or metabolic causes. The kidney can readily handle mild increases in acid or alkali by rapidly excreting one or the other. It is only when the kidney’s ability to excrete acids/alkali is overwhelmed or has not geared up sufficiently that changes in pH occur. Renal control of pH involves two steps: 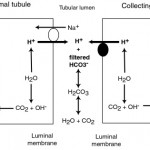 Schematic of reclamation of filtered bicarbonate in the kidney

Important concepts relating to the kidney and acid-base balance are:

Filtered bicarbonate is retained (“reclaimed”) in proximal and collecting tubules through concurrent excretion of H+ (see figure to the right). 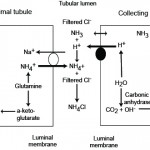 These are regulated by the following: