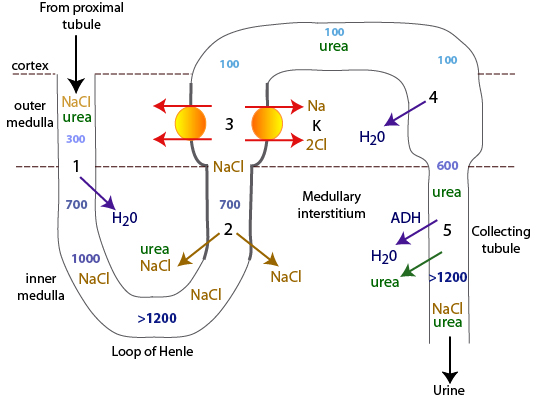 The kidney conserves water by first diluting urine as it moves through the loop of Henle and then concentrating urine in the distal tubules and collecting ducts (the latter under the influence of antidiuretic hormone or ADH). This is accomplished by the descending loop of Henle being initially impermeable to sodium chloride (NaCl) and permeable to water then becoming permeable to NaCl and impermeable to water in the ascending limb of the loop of Henle (creating a dilute urine and a hypertonic medulla). Once the dilute urine enters the distal tubules, water is resorbed without NaCl creating a concentrated urine (the concentration of which is determined by the degree of tonicity of the medulla). This is accomplished as follows:

1. Normally the glomerular filtrate has a similar osmolality to plasma (300 mOsmol/kg). In the descending limb of the loop of Henle, the NaCl cannot be absorbed, but water is passively resorbed (#1), creating a hypertonic urine (>1200 mOsmol/kg) as it enters the ascending limb.
2. When this NaCl-rich fluid enters the NaCl-permeable (water-impermeable) thin ascending limb in the inner medulla, NaCl is absorbed passively along its concentration gradient without water (#2). The absorbed NaCl in with urea absorbed from the collecting tubule lumen under the action of ADH; #5) create a hypertonic inner medulla which allows the passive diffusion of water out of the tubular lumen in the descending limb (#1). The absorbed NaCl (and urea) is retained in the outer and inner medulla by the vasa recta blood supply (countercurrent exchange).
3. As the more concentrated urine enters the water-impermeable thick ascending limb of the loop of Henle, a Na-K-2Cl transporter actively pumps NaCl into the outer medulla without water (#3), creating a dilute urine (around 100 mOsm/kg) as it enters the distal tubules. This is the pump that is inhibited by loop diuretics. Urea is retained in the tubular fluid (poorly absorbed in this region and may even enter the tubular lumen from the interstitium to some degree).
4. When the urine enters the last part of the distal tubule and first part of the collecting ducts in the outer medulla, water is absorbed passively (#4) along a concentration gradient established by the absorption of NaCl by the Na-K-2Cl carrier in the ascending limb (#3). This begins to concentrate the urine.
5. Urine is maximally concentrated under the influence of ADH, which opens water channels (aquaporins) in the collecting tubules in the inner medulla and allowing water to flow along the concentration gradient already established by the countercurrent mechanism in the loop of Henle. The absorption of urea, under the influence of ADH, contributes substantially to the medullary interstitial osmotic gradient.

Thus, the degree to which water entering the collecting tubules (step 4 and 5) will be absorbed (and how concentrated the urine will be) depends on the ability of the tubule to create and maintain a hypertonic medullary interstitium. This is influenced by the amount of solute being filtered (NaCl and urea), renal tubular function (loop of Henle dilute urine, whereas the distal and collecting tubules concentrate urine mostly through the action of ADH), and medullary blood flow in the vasa recta. Factors that interfere with these functions can result in inadequate urine concentration and loss of water. For example, diuresis of any cause increases renal tubular flow rate, allowing less time for NaCl and urea to be absorbed and creating a less hypertonic medulla (and consequently lowered urine specific gravity) – this is called medullary solute washout. Decreased production of urea by the liver (liver insufficiency) will have a similar effect (less urea will create a less hypertonic medulla). Increased blood flow in the vasa recta (e.g. hypokalemia, hypercalcemia) decreases tonicity in the medullary interstitium by removing absorbed NaCl and urea too quickly from the interstitium (also resulting in medullary solute washout). Tubule unresponsiveness to ADH (e.g. hypercalcemia, endotoxemia, corticosteroids) can result in a less concentrated urine despite a hypertonic medulla. 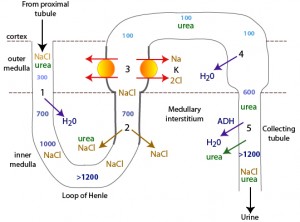