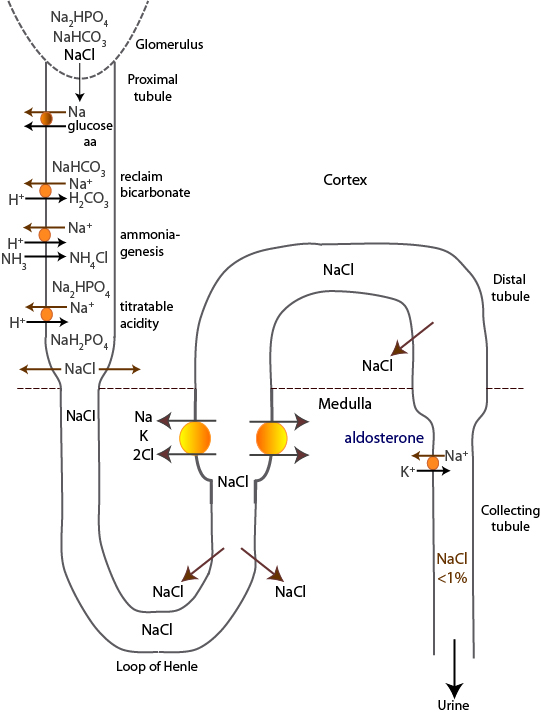 The kidneys conserve most of the daily filtered load of sodium. Sodium is filtered through the glomerular barrier and is mostly in a complex with sodium chloride although other forms of sodium (e.g. sodium hydrogen phosphate and carbonate) are also filtered.
1. Proximal tubule: Here most of the sodium is reabsorbed (around 65-70%). Sodium without chloride is absorbed with glucose, amino acids and phosphate (not shown) through specific carriers. Sodium as sodium carbonate or phosphate is resorbed in exchange for hydrogen, with a sodium=hydrogen antiporter on the luminal side of the proximal tubular cell membrane. When this occurs, a bicarbonate is reclaimed (sodium carbonate) or generated (sodium hydrogen phosphate) in exchange for hydrogen, thus sodium absorption is linked to acid-base balance in the proximal tubules. Sodium can also be absorbed by the proximal tubules after they generate ammonia from glutamine (renal ammoniagenesis). This also generates new bicarbonate (again, in exchange for hydrogen) and is stimulated by acidemia and hypokalemia. This generates a high concentration of luminal chloride, which is passively absorbed with sodium in later segments of this tubule.
2. Thin ascending limb of the loop of Henle: Sodium with chloride is passively absorbed from the concentrated urine filtrate (because the descending limb of the loop of Henle is relatively impermeable to solute, but permeable to water) in the thin ascending limb.
3. Thick ascending limb of the loop of Henle: Sodium is absorbed with 2 x chloride and a potassium by a luminal Na-K-2Cl cotransporter. This cotransporter is inhibited by loop diuretics, e.g. furosemide. The sodium/hydrogen antiporter also operates in this segment. Around 15-25% of filtered sodium is absorbed in this segment.
4. Distal tubules: Sodium chloride is absorbed together by a cotransporter, which is inhibited by thiazide diuretics. Around 5% of filtered sodium is absorbed here.
5. Collecting ducts: Here is where fine control over sodium absorption occurs. Sodium is absorbed (in exchange for potassium) passively through open channels in principal cells. These open channels are increased in response to aldosterone. Absorption of sodium facilitates passive chloride absorption in this segment as well as the nearby sections of the distal tubule. The channels are inhibited by potassium-sparing diuretics.

The kidney is extremely efficient at absorbing filtered sodium and chloride, such that <1% of the filtered load is resorbed. Indeed, if more than 1% of sodium and chloride are present in the urine (in relation to creatinine, i.e. fractional excretion) in an azotemic animal (particularly with hyponatremia), this suggests a salt-losing nephropathy. Note, the energy for sodium absorption comes from a basolateral sodium/potassium pump, which exchanges 3 Na for 2 K, thus creating a negative potential within the cells, that also helps drive absorption. The luminal sodium/hydrogen antiporter activity is stimulated by angiotensin II (through renin), which promotes sodium resorption in response to hypovolemia and hypo-osmolality. 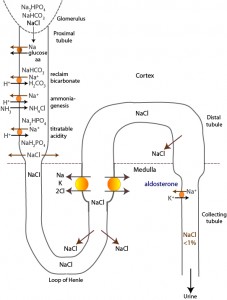