Chemistry » Acid Base » Types of disturbances 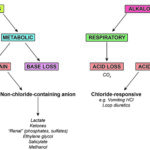 The different types of acid-base disturbances are differentiated based on:

Acid-base disturbances have profound effects on the body. Acidemia results in arrhythmia, decreased cardiac output, depression, and bone demineralization. Alkalemia results in tetany and convulsions, weakness, polydipsia and polyuria. Thus, the body will immediately respond to changes in pH or H+, which must be kept within strict defined limits. As soon as there is a metabolic or respiratory acid-base disturbance, body buffers immediately soak up the proton (in acidosis) or release protons (alkalosis) to offset the changes in H+ (i.e. the body compensates for the changes in H+). This is very effective so minimal changes in pH occur if the body is keeping up or the acid-base abnormality is mild. However, once buffers are overwhelmed, the pH will change and kick in stronger compensatory responses. Remember that the goal of the body is to keep hydrogen (which dictates pH) within strict defined limits. 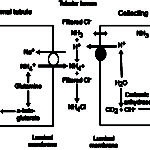 FYI: In a primary metabolic disturbance, we do not expect the attempted correction of the kidney to normalize the pH unless the primary disturbance has been lessened by our intervention or has ceased so the pH is not continued to be driven down or up (in an acidosis or alkalosis, respectively). So once the primary disturbance is gone, the kidney will rapidly correct the change in pH (unless we did so first) if renal function is normal. If the primary disturbance is still ongoing and driving the pH down or up, an attempted corrective renal response (which requires normal and ideally optimal renal function) is not expected to return the pH to normal. In addition, in a primary metabolic alkalosis, the kidneys attempt to correct the pH increase is compromised and the kidney actually worsens and not lessens the alkalosis (see below for more detail).

There are four primary types of acid-base disorders, which the body responds to.

Metabolic acidosis can be caused by: 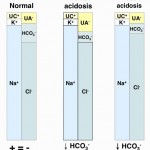 These causes/types of acidosis can be differentiated on clinical history (processes responsible for the acidosis), corrected chloride (Cl–corr) and anion gap (AG). 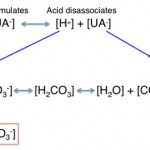 Bicarbonate can be consumed or titrated by a non-volatile non-chloride-containing acid that is produced in the body or is an exogenous toxin, i.e. it is usually pathologic.

The acids (the H+ is released with dissociation of strong acids) are buffered by or consume HCO3– in plasma (UA– goes up, HCO3– goes down), which maintains electroneutrality, therefore the Cl–corr is normal. The anion portion of the non-volatile acids are “unmeasured anions” and their accumulation will increase the AG. Thus, titration or consumption of bicarbonate by a non-volatile non-chloride-containing acid results in a high anion gap metabolic acidosis. With an uncomplicated high anion gap metabolic acidosis, the decrease in HCO3– is roughly equivalent to the increase in AG or unmeasured anions (UA–).

Causes of a primary titration metabolic acidosis include:

This is recognized by a hyperchloremic metabolic acidosis and is due to loss of bicarbonate or a gain of an acid that has chloride as its anion. The anion gap is normal because there is no accumulation of a non-chloride-containing acid (with its unmeasured anion) unless there is another primary disturbance. A hyperchloremic metabolic acidosis can be primary due to bicarbonate loss or gain of a chloride-containing acid or in compensation for a primary respiratory alkalosis.

Causes of a hyperchloremic metabolic acidosis include:

Metabolic alkalosis is caused by: 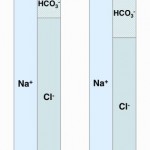 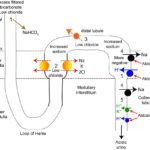 The kidney and perpetuation of metabolic alkalosis

Once metabolic alkalosis begins, other conditions associated with the primary process causing the alkalosis will perpetuate or maintain the alkalosis, specifically hypovolemia, hypochloremia (this is the principal driver of this problem) and hypokalemia. These, particularly the hypochloremia, worsen the alkalosis by causing (in various ways) increased sodium delivery to the distal nephron and increased aldosterone concentrations (via reduced salt sensing in the macula densa). Thus, the kidney, instead of helping correct the metabolic alkalosis actually hurts, by excreting acid (H+) in the collecting tubules (when you really want to retain it to offset the alkalosis) in exchange for sodium resorption. In a nutshell, this is because the kidney becomes sodium avid (wants to retain all filtered sodium as this is the primary determinant of blood volume and sodium retention will help water retention and offset hypovolemia). Both reduced NaCl and hypovolemia induce aldosterone secretion to retain sodium but the retention of sodium comes at the cost of potassium and hydrogen excretion (aldosterone not only stimulates sodium absorption by principal cells in the collecting tubules, it also directly stimulates the V-H+-ATPase in type A intercalated cells in the collecting tubules). In addition, chloride and potassium depletion decrease sodium resorption in the loop of Henle and early distal tubules, thus increasing distal sodium delivery so more sodium is absorbed in the cortical collecting tubules in exchange for hydrogen, particularly when potassium is depleted. So the kidney (primarily the collecting tubules) is largely responsible for persistence of metabolic alkalosis, regardless of cause. We can help the kidney by giving it what it needs to do its job: Volume (replacement fluids), chloride and potassium and fixing the primary problem causing the metabolic alkalosis in the first place. Once the primary problem is no longer driving the pH up and the kidney has these tools, it will be able to excrete the excess bicarbonate and correct the alkalosis (if we have not done so first).

Metabolic alkalosis due to acid loss 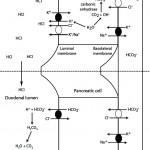 Metabolic alkalosis can be secondary to losses of chloride (with or without hydrogen) in a so-called chloride-depleted or chloride-responsive metabolic alkalosis or when there is stimulated excretion of hydrogen with losses in the urine, e.g. primary hyperaldosteronism. In the latter rare disorder, the excess aldosterone directly stimulates the V-H+-ATPase in the collecting tubules causing hydrogen (acid) loss (chloride passively follows but does not control or influence the acid loss) and is thus non-responsive to chloride supplementation.

In an uncomplicated metabolic alkalosis, the increase in HCO3– is usually proportional to the decrease in Cl–corr and the AG is normal. A metabolic alkalosis is a common acid-base abnormality in ruminants with abomasal outflow obstruction (e.g. displaced abomasum) and in small animals with vomiting of gastric contents (most common type of vomiting). The different types of metabolic alkalosis are elaborated on below:

Metabolic alkalosis due to base gain

Administration of NaHCO3 (e.g. treatment of metabolic acidosis) or organic anions (which are metabolized to HCO3–, e.g. citrate in massive blood transfusions), may cause a metabolic alkalosis, particularly under conditions of volume depletion or renal dysfunction, where the kidney acts to retain acid as indicated above. In situations with normal kidney function and chloride concentration, the kidney should rapidly excrete the excess base. A metabolic alkalosis due to gain of base is uncommon.

In summary, causes of metabolic alkalosis are:

The following table provides a summary of the changes in the blood gas (pH, HCO3–, BE) and biochemical panel (HCO3–, AG, Cl–corr) with primary metabolic acid-base disturbances, based on the type of disturbance.

A respiratory acidosis is identified by an increased pCO2 and low pH (or tendency towards a low pH) on a blood gas analysis. As mentioned previously, the chemistry panel will not provide any information on the respiratory component of acid-base status. A respiratory acidosis is caused by decreased ventilation or gas exchange in the alveoli, which can be secondary to neurologic (affecting the medullary respiratory center), musculoskeletal (affecting the diaphragm and thoracic wall), pulmonary, and cardiac disorders. The most common causes are primary pulmonary disease, ranging from upper airway obstruction to pneumonia, in animals. Note that pneumonia alone unlikely to cause a respiratory acidosis (since pCO2 diffuses so readily across alveolar walls) unless the lung involvement is extensive or there is concurrent respiratory muscle fatigue from a prior hypoxic or pain-induced hyperventilation. Diseases or drugs that inhibit the medullary respiratory center also produce a profound respiratory acidosis, e.g. general anesthesia.

Causes of a respiratory acidosis include:

Causes of respiratory alkalosis include:

Any deviations from that listed above suggest the likelihood of a mixed-acid disturbance. Remember that changes in serum proteins (mostly albumin) may impact the AG (and should be considered when using these guidelines). Also, do not over-interpret mild changes in electrolytes or other test results; no analyzer or test is perfect!

Some examples of mixed acid-base disturbances and the changes that ensue are shown in the table below. Note that not all possible combinations are shown in this table.

The most common mixed acid-base disturbances are: