To detect an acid-base disturbance, both a blood gas analysis and chemistry panel should be performed. This combines traditional blood gas analysis (Henderson-Hasselback equation) and the strong ion approach (by evaluating the contributions of electrolytes, in particular). The blood gas analysis and chemistry panel provide information on most of the variables responsible for acid-base disturbances and the results should be used together for interpretation. Note also that other information should be used to determine the cause for acid-base disturbances, including clinical signs and examination findings (e.g. diarrhea may cause a metabolic acidosis), the hemogram (e.g. hypoxia from an anemia may cause a respiratory alkalosis), and diagnostic imaging (pulmonary disease may cause respiratory acid-base abnormalities). This section also provides more detailed information on individual test results, specifically anion gap and bicarbonate. Information on sodium and chloride (strong ions) are given under the electrolyte section of the site. 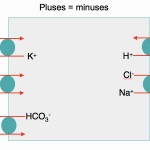 The body has protective mechanisms against acid-base disturbances and will attempt to compensate.

Identification of acid-base disturbances requires blood gas analysis and measurement of a chemistry panel, which includes the traditional assessment of blood gas as well as strong ions (electrolytes, in particular). All tests must be interpreted in the context of the patient. Examination of the patient should prompt consideration of underlying acid-base disturbances, e.g. an animal that is dyspneic could very well have a respiratory acid-base abnormality. The kidney plays an essential role in responding to and also generating acid-base disturbances and evaluation of renal function is imperative in most patients with acid-base abnormalities. These tests provide the following information:

This can be performed on venous or arterial blood using a blood gas analyzer. Blood gas analysis is the only way we can determine the respiratory component of acid-base status and identify primary or secondary respiratory disturbances. The analysis provides the following information:

Interpretation of changes in each of these results is given below.

Some of the newer analyzers can also yield results for ionized calcium, acids (lactate) and oximetry parameters, e.g. saturation of oxygen.

Blood should be collected from a peripheral artery or vein into syringes in which sodium (or lithium) heparin has been used to coat the syringe and needle (evacuated syringe) or specialized heparin syringes, which are electrolyte-balanced and have the correct amount of heparin and ideal for ionized calcium measurement. The latter syringes are preferred, but they are expensive, hence most people use the evacuation method. This is usually fine, however you should ensure that there is <5% heparin in relation to the volume of blood collected in the syringe. This is because excess heparin can influence blood gas values. The sample should be kept anaerobic at all times and analyzed promptly after collection to minimize false changes that occur with storage. Thus, blood gas analysis is a point of care test and a sample should not be sent by mail to a diagnostic laboratory for testing.

This is the only laboratory indication of the respiratory component of acid-base status. Therefore, blood gas analysis is essential to evaluate the respiratory contribution to an acid-base disturbance. This is slightly higher in venous than arterial samples. This is directly measured using a carbon dioxide electrode.

This test result is only reliable in arterial blood samples because tissue consumption of oxygen will automatically decrease the pO2. It indicates the amount of dissolved oxygen in the blood sample. This is directly measured using an oxygen electrode.

The bicarbonate, with the total carbon dioxide and base excess, is an indicator of the metabolic component of acid-base status. It is a calculated value and reported as the standard bicarbonate, which is the concentration of bicarbonate in the plasma after equilibration with carbon dioxide at a partial pressure of 40 mm Hg. It is calculated from the pH and pCO2, based on the Henderson-Hasselbach equation (where pH = 6.1 = log10(bicarbonate ÷ [0.03 x pCO2] ).

This can be falsely decreased by storage (lactate consumes bicarbonate and dissolved carbon dioxide is lost to air). Collection into EDTA can falsely increase values. Bicarbonate is a dependent variable and will be directly affected by changes in pCO2 (when dissolved in blood or plasma water) based on the following formula:

Base excess (BE): Metabolic component

The base excess is the amount of strong acid or base required to titrate 1 liter of blood to pH 7.4 whilst pCO2 is kept constant at 40 mmHg. It is calculated from the hematocrit, pH and pCO2. Base excess is affected by changes in non-volatile (or noncarbonic) acids and is thus an indication of the metabolic component of acid-base status. This is considered to be the best indicator of the metabolic component of acid-base, since unlike bicarbonate, it is not influenced directly by changes in carbon dioxide (see above). However, in reality, the bicarbonate, total carbon dioxide and base excess change in parallel and can be interpreted similarly. 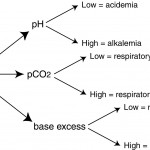 A buffer is a molecule which can accept a positively charged hydrogen ion (H+). The whole blood buffer base is the sum of all buffers in the body. These buffers are found in the vascular compartment (bicarbonate, proteins with negative charges, phosphates) and within cells (phosphates and proteins, particularly hemoglobin in red blood cells). The most important buffer for acids generated in the body (metabolic acidosis) is bicarbonate, whereas intracellular buffers are important for buffering carbon dioxide (respiratory acidosis). This is because carbon dioxide generates bicarbonate and hydrogen when it dissolves in plasma water (see above equation). Thus, bicarbonate cannot titrate a respiratory acidosis or primary increase in carbon dioxide.

The above are the typical results obtained from a blood gas analyzer. However, what this analysis does not provide is information on the type of metabolic acidosis (consumption of bicarbonate or bicarbonate loss) and strong ion levels (sodium, chloride). Without measurement of strong ions and calculation of the anion gap (AG), the type of acidosis cannot be determined and a mixed disturbance may be missed.

This can be performed on serum or heparinized plasma and results are optimal if the sample is analyzed fresh (to prevent lactate accumulation from anaerobic glycolysis of cells in vitro) with minimal exposure to air. The chemistry panel provides information on metabolic disturbances only; blood gas analysis is essential for identifying respiratory disturbances and determining if the patient is acidemic or alkalemic.

The important aspects of the chemistry panel for assessment of acid-base status are:

How these tests are used to help identify acid-base disturbances are given below.

where, average = midpoint of reference interval; measured = actual value obtained
Since chloride is an acid, disproportionate changes in chloride are interpreted as follows:

The HCO3– is measured directly with the chemistry analyzer and results should be similar to that obtained from a blood gas analysis (if the sample is handled correctly). Note that a normal HCO3– does not rule out an acid-base disturbance. In mixed disturbances, there can be opposing effects on the HCO3– (metabolic alkalosis will increase, whereas metabolic acidosis will decrease, HCO3–), so the HCO3– may be normal. In this instance, it is essential to evaluate Cl–corr and AG results, otherwise a mixed disturbance will be missed (see more information on mixed acid-base disturbances below). Changes in bicarbonate are interpreted as follows (assuming correct sample handling):

Rearranging the formula, you get:

So, in reality, the anion gap should be thought of as the difference between unmeasured anions (which outnumber cations) and unmeasured cations and not as a calculation of sodium, potassium, chloride and bicarbonate. Note that some people do exclude K+ from the calculation, but this is not recommended, particular in cattle where potassium concentrations can be quite low (Constable 2014). Also, the measured and not the corrected chloride is used in this calculation.

Since albumin is an unmeasured anion and immunoglobulins are more cationic than anionic at physiological pH (7.4), these will affect the AG and changes in these proteins should be considered when interpreting the AG. Changes in protein values have less of an impact on the AG compared to the strong ions. Protein results are used more in the strong ion approach to acid-base status. For more information on these protein measurements, see related links below.

Since inorganic phosphate is an unmeasured anion and ionized Ca and Mg are unmeasured cations, these will affect the AG and changes in these results should be considered when interpreting the AG. Phosphate is a strong ion and is used more in the strong ion approach to acid-base status. Since ionized calcium and magnesium are found in relatively low concentrations in health or disease, they contribute only a little to changes in the anion gap and are not considered strong cations. For more information on these minerals, see related links below.

The kidney not only has a central role in responding to acid-base disturbances, but can also be responsible for a primary disturbance (or lack of compensation or attempted correction) if kidney function is abnormal. For example, renal azotemia (and sometimes post-renal azotemia) may cause a titration (high anion gap) acidosis, due to decreased renal excretion of acids normally filtered through the kidneys, e.g. phosphates, sulfates and citrates (remember, high phosphate is a feature of decreased glomerular filtration rate). Therefore, results of renal tests should be assessed to determine the potential cause of a metabolic acid-base disturbance. Furthermore, a normally functioning kidney is required for the body to compensate for a primary respiratory disturbance or to help correct a primary metabolic disturbance. Note, that not all renal disease will result in acid-base abnormalities. An animal can have renal disease, but still be able to compensate for a respiratory acid-base disturbance or may not have a primary metabolic disturbance due to the renal disease. For more information on renal function, see related links below.

As indicated above, at Cornell University, we combine traditional blood gas interpretation (looking at pH, bicarbonate or base excess and pCO2), with strong ions (electrolytes and the anion gap, in particular). This will help identify the majority of disturbances that occur in animals versus looking at blood gas alone. This approach does include, to a degree, the contribution of protein and other minerals (phosphate) on blood gas analysis, but these have less of an effect on acid-base balance than strong ions. The blood gas analysis provides pH, bicarbonate or base excess (metabolic component) and pCO2 (respiratory component) but not the contribution of strong ions (sodium and chloride in particular), protein (albumin, especially) or minerals (phosphate). The latter is obtained from the chemistry panel. Here we give one approach to interpreting blood gas and chemistry results that are related to acid-base balance.