This non-traditional approach to acid-base assessment involves consideration of strong ions and the effects of proteins on acid-base status. The strong ion approach is quite complicated and uses many formulas, which are beyond the scope of this content. However, this approach can be very useful because it is:

Advantages of the strong ion approach for diagnosis of acid-base disturbances are nicely outlined by Constable (2014), who also provides relevant equations, pertinent to cattle.

The main points about the strong ion approach that will be addressed here are general principles, the strong ion difference, and different types of acid-base disturbances identified by this approach. At Cornell University, we use a combination of the classic blood-gas interpretation (pH, bicarbonate and base excess = metabolic, pCO2 = respiratory) and strong ion approach, particularly with respect to strong ions (measured electrolytes and unmeasured, e.g. lactate).

The strong ion difference is the difference between negatively and positively charged strong ions. Since Na+ and Cl– are the most abundant strong ions, it is relatively simple to calculate the SID(inorganic) from Na+ and Cl–, as follows:

This includes phosphate and proteins, particularly albumin, which are weak anions (or acids). Renal or respiratory compensatory mechanisms do not occur in response to changes in Atot.

Unmeasured strong ions include lactate, ketones (β-hydroxybutyrate, acetoacetate), and sulfates. The presence of these XA– can be evaluated using several formulae, only one of which will be given here. In this formula, [XA–] is estimated by their contribution to the base excess (BE); since XA– are anions, they will cause an acidosis and decrease the BE.

where, change is the difference between the midpoint of the reference interval and the measured concentration of the specific analyte (see Cl–corr previously for an example). The change in free water uses a formula involving sodium concentrations and the normal strong ion difference. Hence, this just adds complexity to the analysis. 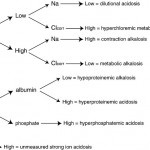 The strong ion approach can identify a metabolic alkalosis and acidosis (see table below) and is superior to the traditional method of assessing acid-base status by inclusion of Atot and free water. Changes in free water alter Na+ and Cl– proportionally, therefore the Cl–corr will be normal, however by decreasing a strong cation (Na+), a gain of free water will cause an acidosis (dilutional) whereas a loss of free water will increase a strong cation (Na+), causing an alkalosis (contraction). In the traditional approach, you may come across the term contraction alkalosis being applied to conditions causing loss of NaCl in excess of water and bicarbonate, such that the extracellular fluid “contracts” around the remaining electrolytes.