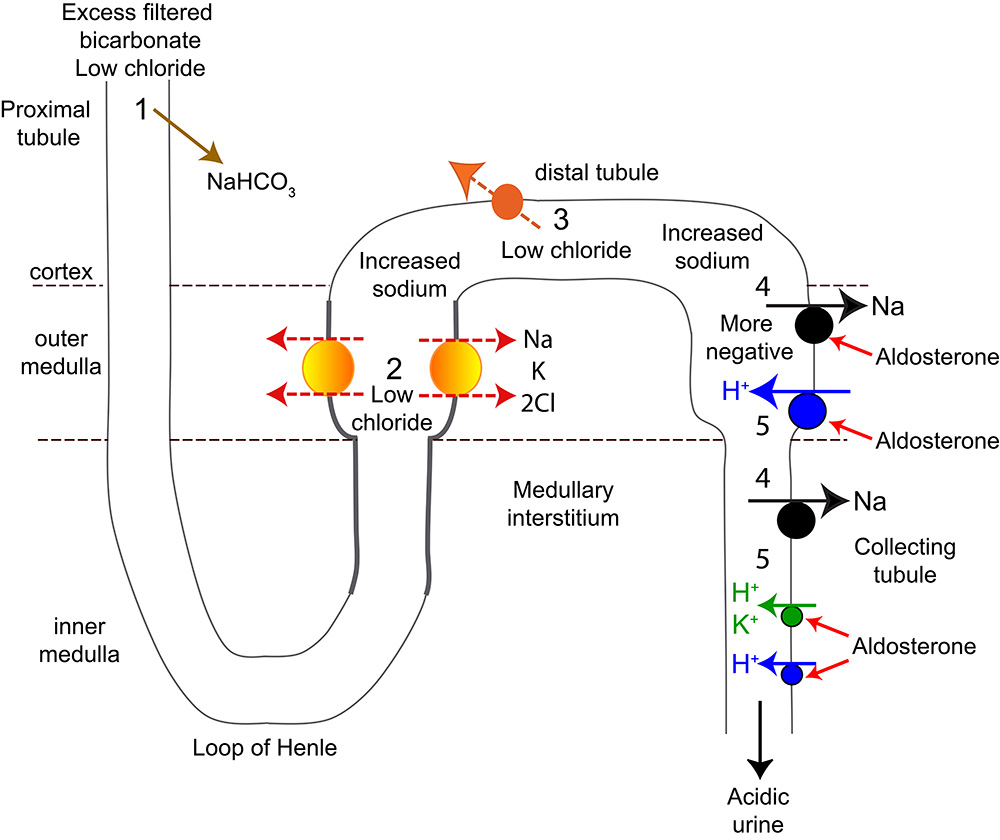 In a chloride-depleted metabolic alkalosis, e.g. gastric vomiting or diuretics, the hypochloremia and kidney is responsible for maintaining and worsening the alkalosis as follows:

1: Excess filtered bicarbonate is retained with sodium in the proximal convoluted tubule instead of chloride as the latter is depleted. The kidney is sodium avid due to hypovolemia, which is caused by the disease resulting in chloride loss.
2. Less sodium is absorbed by the Na-K-2Cl carrier in the loop of Henle (due to the hypochloremia), resulting in increased sodium delivery to the distal tubule.
3. In the early distal tubule, the NaCl transporter cannot reabsorb the extra sodium efficiently as chloride is low, resulting in increased delivery of sodium to the collecting tubules and stimulation of aldosterone.
4. The increased sodium delivered to the cortical collecting tubule increases flow rate and stimulates sodium resorption by the sodium transporter (ENaC) in principal cells. Sodium absorption increases the negative charge in the lumen, stimulating the sodium-dependent H-ATPase pump and the H/K-ATPase of type A intercalated cells. Aldosterone facilitates the action of both the ENac and the H- or H/K-ATPases.
5. The ENaC also absorbs sodium in the medullary connecting tubule, in exchange for hydrogen or potassium excreted by the H-ATPase or H/K-ATPase (also found in the cortical collecting tubule, although it is not depicted there in this image).
As a result, the urine is acidic and the blood becomes more alkaline as hydrogen excretion in the distal nephron is linked to bicarbonate absorption (through the action of carbonic anhydrase within the cell).
Potassium deficiency will contribute to the alkalosis, by decreasing sodium absorption in the loop of Henle (Na-K-2Cl pump) and by the H/K-ATPase excreting hydrogen and not potassium.
Correction of the metabolic alkalosis primarily relies upon replacement of chloride (with hypertonic saline, which helps correct hypovolemia, which also stimulates aldosterone release) with supplemental potassium. Once the kidney has chloride, it can start to eliminate bicarbonate and correct the alkalosis. Improvement of hypovolemia also helps reduce the stimulus for sodium resorption and aldosterone secretion, although reduced salt sensing (NaCl) is the major driver of the latter. Note that aldosterone facilitates the so-called “paradoxic” aciduria but is not the primary driving force for the aciduria as it still occurs in rodents that are adrenalectomized. 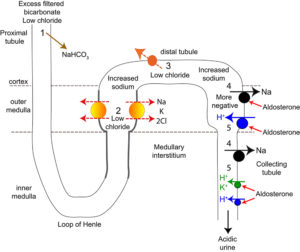