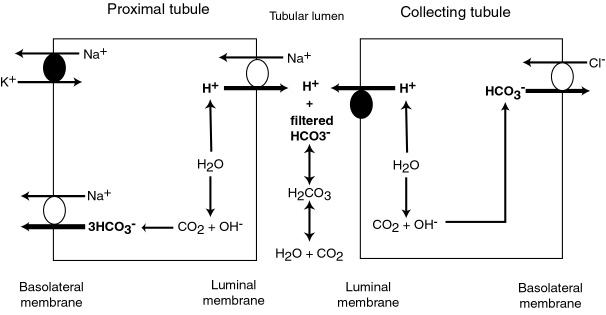 b) In the collecting tubules, carbonic anhydrase again does its work and generates bicarbonate and hydrogen. The filtered bicarbonate is “reclaimed” by the active excretion of hydrogen by a hydrogen ATPase-pump (not in exchange for sodium). The bicarbonate generated by carbonic anhydrase is excreted back into blood in exchange for chloride, via a chloride/bicarbonate exchanger (the energy for this exchanger is derived from the sodium/potassium pump located on the basolateral membrane (not shown). A similar hydrogen ATPase does operate in the PCT, but the Na/H exchanger described above is responsible for about 2/3 of the “reclaimed” bicarbonate. Aldosterone directly activates the hydrogen ATPase pump and stimulates the basolateral chloride/bicarbonate exchanger, thus promoting hydrogen excretion and bicarbonate retention. 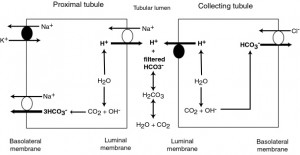