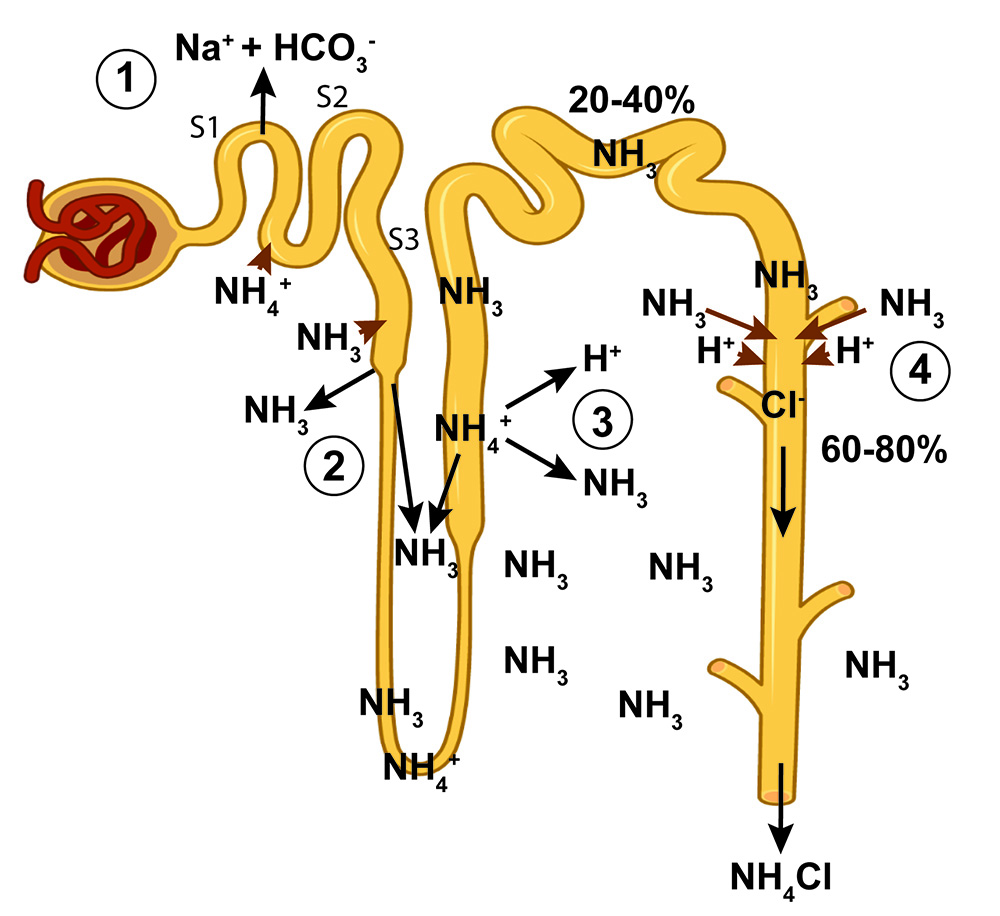 1: The proximal tubule generates ammonium (NH4+) and bicarbonate (HCO3–) from glutamine metabolism within the tubular cell, primarily in the S1 and S2 segments. The NH4+ is then transported into the tubular lumen in exchange for Na>+ (NHE-3 transporter), whereas the HCO3–) is absorbed back into blood with Na>+ (NBCe1a transporter), thus generating new bicarbonate in blood. Once within the renal tubular lumen, the NH4+ can combine with filtered chloride and be excreted, but is usually resorbed in the ascending limb of the loop of Henle via the NKCC2 carrier (3), by supplanting potassium. If NH4+ breaks down to ammonia (NH3) and H+ within the cell, the NH3 can be exported out into the lumen where it combines with H+) (moved into the lumen via a H+ luminal transporter). After becoming NH4+, the secreted NH3 undergoes the same fate as above. The ammonia can also be transported into the renal interstitium and blood, but only a small amount undergoes this transfer.
2: Within the terminal S3 segment of the proximal tubule, NH3 filtered by the glomerulus or that produced within the cell diffuses or is transported into the interstitium. Most of the NH3 in the interstitium that comes from the proximal tubule originates from this segment. The NH3 can also be moved into the lumen, where just like the S1 and S2 segments, the NH3 can combine with H+ (moved into the lumen via a H+ luminal transporter) to form NH4+, which can be excreted as NH4Cl or reabsorbed by the NKCC2 carrier (3), as indicated above. However, under normal conditions, the S3 segment is a net absorber of NH3. Once within the lumen, the NH3 can remain within the lumen and, unlike NH4+, is not resorbed in the ascending limb of the loop of Henle, which is impermeable to NH3 as well as water. This S3 segment movement of NH3 into the tubular lumen contributes around 20-40% of the NH3 excreted in the urine daily (as ammonium chloride).
3: Within the ascending limb of the loop of Henle, the NH4+ that is within the tubular lumen will be absorbed via NKCC2 (there are other transporters as well, but this is the main one for ammonium transport into the cell) and is exported into the interstitial space, where it becomes NH3. Thus, NH4+ production from proximal renal tubular ammoniagenesis and NH3 production within the S3 proximal tubule segment is responsible for creating a high medullary interstitial concentration of NH3, which is used by the collecting tubules for acid and ammonia excretion (as ammonium chloride).
4: Within the collecting tubular lumen, NH3 combines with H+ excreted by the V- H+-ATPase in the type A intercalated cells to form NH4+. The type A cells generate the H+ from water and carbon dioxide by the luminal-membrane-associated carbonic anhydrase II. The H+ may also come from luminal H+/ K+ exchange (H+ out into lumen, K+ into the cell). The NH3 comes from that produced higher up within the nephron (S3 segment of the proximal tubules primarily) and is already in the lumen, with more diffusing or being transported across the cell from the interstitium (where its concentration is high) into the tubular lumen. The NH4+ combines with luminal chloride (Cl–), which mainly passively follows H+ excretion via a paracellular pathway in this segment and is excreted as ammonium chloride (NH4Cl). In this way, the collecting tubules excrete most of the NH3 (60-80%) that appears in the urine (as NH4+). 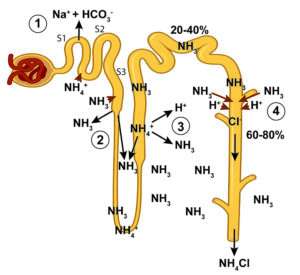