Clues as to the underlying presence of liver disease and the nature of the disease (i.e. our four pathologic processes of injury, cholestasis, altered function or blood flow) are derived from all screening clinical pathologic tests – the hemogram, biochemical profile, and urinalysis – as outlined below. Of course, history, signalment, clinical signs and results of other diagnostic testing (ultrasound examination, abdominal radiographs) all help consolidate evidence for liver disease. Results from all this testing then dictate further procedures (e.g. aspiration or biopsy of the liver, peritoneal fluid analysis), which can provide the specific diagnosis.

The hemogram may be absolutely normal in animals with liver disease, but sometimes there are findings that should make us think about underlying liver disease (which should then be confirmed through other diagnostic testing).

Naturally, the biochemical panel is key to identifying underlying liver disease, but results within reference intervals do not exclude the possibility of disease. Generally, we divide up the tests on a screening chemistry panel into “mini-panels” which allow us to detect the 4 main pathophysiologic processes:

With respect to hepatocellular injury and cholestasis, it is useful to look at the degree of changes to see which pathophysiologic process is dominating. For instance, if increases in the inducible enzymes exceed that of the leakage enzymes, it suggests cholestasis or issues in the portal region or zone 3 of the liver is the dominant pathologic abnormality. In contrast, if liver leakage enzyme activities are very high, with mild to no increases in bilirubin, injury is dominating (and could be occurring anywhere in the liver). It is also worthwhile looking at other findings on a chemistry panel that may be responsible for the liver disease or arise because of liver disease. For instance, dogs and horses with chronic active hepatitis and cholangiohepatitis respectively, can have a polyclonal gammopathy (with increases in beta and gamma globulins) secondary to intestinal antigens not being metabolized by the liver and stimulating a generalized acquired immune response. Low iron and % saturation of transferrin may be seen in dogs with portosystemic shunts (see above). Horses with hypertriglyceridemia are at risk of developing hepatic lipidosis. 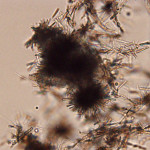 Whenever possible, the urine should be examined in sick animals with suspected liver disease or to screen animals with an unknown condition. This is more readily accomplished in dogs and cats, where it is far easier to obtain urine than larger domestic species. The following abnormalities can be seen in urine with liver disease (but again are not specific for liver disease):

Since hepatocytes produces most of the coagulation factors (exception being factor VIII, which is produced in hepatic sinusoidal and extrahepatic endothelial cells), synthetic liver failure (>70-75% loss of liver) can result in a hemorrhagic diathesis. The liver also produces coagulation inhibitors (antithrombin, protein C, protein S etc), but we really do not recognize thrombosis in animals as a consequence of hepatic insufficiency (probably just because it is difficult to detect thrombosis generally as some  human patients with liver dysfunction do suffer from thrombosis), although measurement of antithrombin and protein C are good markers of hepatic insufficiency or failure as well as portosystemic shunting (protein C). For more on how the liver affects hemostasis, refer to the hemostasis section of the website. 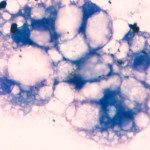 Naturally aspiration of the liver can yield definitive diagnosis with diffuse liver disease (e.g. hepatic lipidosis or lymphoma). Liver disease (particularly chronic or diseases associated with portal hypertension) can also result in ascites, which is typically a transudative effusion. Examination of abdominal fluid can occasionally yield a definitive diagnosis as to the cause of liver disease, e.g. exfoliating neoplasia. For more on effusions, see the cytology section of the website.