Fluid cannot normally be aspirated from the abdomen in small animals (dogs, cats) but small amounts can be collected from the abdomen of large animals (horses, ruminants, camelids). Thus, interpretation of peritoneal fluid results includes the concept of “normal values” for the latter species, whereas any abdominal fluid that has accumulated is abnormal in small animals (i.e. there are no normals). Regardless of species, the same mechanisms of fluid accumulation apply, i.e. transudation, vessel/viscus rupture/leakage, exudation and neoplasia.

A transudative effusion develops in the abdominal cavity due to changes in plasma hydrodynamic pressure (e.g. venous hypertension) or changes in plasma oncotic pressure (i.e. hypoalbuminemia). Both mechanisms may be operative in a single patient. Abdominal fluid in small animals is classified into low (protein-poor) and high protein (protein-rich) transudates, which helps determine the mechanism of the effusion and potentially the underlying cause. Chronically increased hydrodynamic forces may cause endothelial perturbations, including altered integrity of interendothelial junctions and incitement of a mild inflammatory response (Sato and Ohashi 2005, Sidall et al 2017, Prystopiuk et al 2018), which may explain protein-rich transudative effusions as well as high neutrophil percentages in these effusions.

These are usually caused by presinusoidal hypertension, i.e. hypertension originating between the portal triad in the liver and the intestinal tract. This is because lymphatic fluid draining from the intestine into the sinusoids of the liver is low in protein. A severe hypoalbuminemia (< 1.0-1.5 g/dL) can also result in a low protein transudate but hypoalbuminemia by itself is insufficient to cause substantial transudation. This is because globulins will also exert oncotic pressure and compensatory increases in lymphatic drainage will reduce fluid accumulation.  Therefore, there are usually concurrent changes in hydrodynamic pressure (e.g. portal hypertension) leading to the effusion in animals with hypoalbuminemia (i.e. more than one mechanism is operative).

The cytologic characteristics of a low protein transudate in small animals are:

Some causes of a low protein transudate are:

High protein transudates develop due to increased plasma hydrodynamic pressure (usually because of venous congestion) in the liver where hepatic sinusoids are more permeable to protein and indicate sinusoidal or post-sinusoidal hypertension (i.e. pressure originating within the liver or proximal to the central vein of the liver). These transudates used to be called “modified” transudates, but this term is falling out of favor.

The cytologic characteristics of a high protein transudate in small animals are: 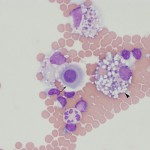 Some causes of a high protein transudate are:

Note that there may be an inflammatory component, with increased vascular permeability without chemotaxis, in effusions that are primarily caused by transudative mechanisms. This can be seen in animals with serosal inflammation or capillary leak syndrome (Sidall et al 2017). The latter is suspected in cases with nucleated cell counts towards the upper limit (3-5000/uL) in small animals or in the equivocal range in horses (5-10,000/uL), with a high proportion of neutrophils (>60-70%) and perhaps evidence of cell death (large individualized apoptotic cells) or other abnormalities (excessive leukophagia, necrotic cell debris within macrophages).

Lymphocyte-rich effusions are usually variants of a transudative effusion and due to leakage of lymph into the abdominal cavity. Since lymph draining from the intestine into the thoracic duct contains chylomicrons (absorbed from the intestine after eating), these effusions are frequently white or pink and opaque in appearance because they are rich in this large lipoprotein (pink is usually from concurrent hemorrhage or blood contamination). Thus, they are often called chylous effusions. Small lymphocytes dominate in these fluids. Unlike thoracic chylous effusions into the thorax, chylous ascites is relatively uncommon. In some patients, the fluid can be lymphocyte-rich but lacking chyle. This could be due to inappetence or anorexia in affected patients or due to leakage of lymph that is not specifically draining the intestinal tract. We have also seen an intestinal small cell lymphoma produce a (neoplastic) small lymphocyte-rich effusion, likely due to concurrent lymphangiectasia or lymphatic obstruction but this is quite rare. 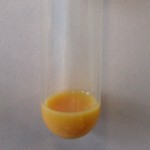 The cytologic characteristics of a chylous effusion in small animals are:

Causes of a chylous ascites are uncommon and include:

Exudates develop when inflammatory mediators cause increased vascular permeability that allows exudation of proteins and extravasation of inflammatory cells (most commonly neutrophils).  These mediators also cause vasodilation, which can exacerbate the effusion by increasing blood flow to the capillaries in the area.  Exudates can be caused by infectious (bacterial, viral, fungal, etc.) or non-infectious (foreign body, necrosis with a tumor, uroperitoneum, bile) causes. In some cases, exudation can occur in the absence of chemotaxis, resulting in high protein but normal cell counts. This is typical of feline infectious peritonitis, where vasculitis and production of vasoactive mediators by infected monocytes contributes to an exudative effusion without substantial neutrophil chemotaxis. For instance, Takano et al (2011) showed that FIP infection in monocytes or alveolar macrophges induces mRNA production and secretion of vascular endothelial growth factor compared to mock-infected cells and virus-infected monocyte culture supernatant increased permeability in cultured feline endothelial cells. However, it was not clear if the endothelial cell layers were confluent and the investigators did not show permeability changes were due to VEGF with blocking antibodies or other inhibitory approaches. In other cases, there may be neutrophil chemotaxis without vascular permeability, resulting in high neutrophil counts but a normal protein concentrations. Both are variants of exudative effusions.

The cytologic characteristics of an exudative effusion in small animals are:

At Cornell University, we reserve the term “hemorrhagic effusion” for cases in which hemorrhage is considered to be the primary cause for the effusion (e.g. hemostatic disorder, traumatic or benign hemoabdomen, or ruptured hemangiosarcoma) versus hemorrhage accompanying or complicating an effusion from other causes.  With hemorrhagic effusions, the PCV of the effusion fluid is usually measurable (>1%) with RBC counts in the millions/ul.  Whenever there are RBCs in an effusion, we try to distinguish whether the RBCs are present from blood contamination during collection or from true hemorrhage into the cavity.  There are several ways to try to make this distinction:

The lack of clotting when a hemorrhagic effusion is collected into a red top tube is a well-recognized phenomenon. A study in 1983 in which radiolabeled fibrinogen was infused with 10 ml/kg of blood via a femoral vein to peritoneal shunt into dogs, showed that the fibrinogen was rapidly degraded to fibrin(ogen) degradation products within 1 hour of infusion, with no crosslinked products being formed. The cleavage of fibrinogen was completely inhibited by heparin, suggesting that thrombin is activated and the blood rapidly clots once infused into the cavity, but then is rapidly lysed. Administration of the fibrinolytic inhibitor, ε-aminocaproic acid, caused clotting of the blood, suggesting that fibrinolysis is the main reason why a hemorrhagic effusion does not clot (Moore et al 1983). Canine mesothelial cells do demonstrate fibrinolytic activity in vitro (Louagie et al 1986). Cultured human mesothelial cells express tissue plasminogen activator (will stimulate fibrinolysis) and plasminogen activator inhibitor-1 (will inhibit fibrinolysis), so the balance of these two mediators will dictate if the mesothelium is profibrinolytic or antifibrinolytic (promoting adhesions) (van Hinsbergh et al 1990).  There may also be regional differences in fibrinolytic activity of the mesothelium (Merto et al 1980).

Causes of a hemorrhagic effusion include: 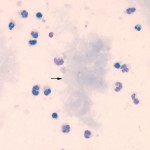 Bile leakage into the abdominal cavity can occur with trauma, ruptured mucoceles (dogs), obstructive lesions (e.g. cholelithiasis) and inflammation or neoplasia in the biliary system or liver. Material resembling bile can also be seen in effusions secondary to rupture or leakage of the duodenum. The bile fluid itself is responsible for only a small amount of the resulting effusion, with the effusion being mostly caused by the ensuing inflammatory response that bile elicits (it is an emulsifying agent, after all).  Bile may be recognized as yellow-brown material either free or within macrophages (bile within macrophages may be difficult to distinguish from hemosiderin) or as “white” bile, which is characterized by aggregates or streaks of mucus (small amounts of which are difficult to distinguish from fibrin) (Owens et al 2003). In most cases, biliary rupture can be confirmed by measurement of bilirubin in the fluid, which would be higher than serum bilirubin (usually 2x or more higher), however we have seen cases of ruptured mucoceles, consisting of white bile, in which the total bilirubin concentration is less than that observed in serum.

Urine leakage into the abdominal cavity can occur with trauma, severe inflammation, neoplasia, or obstruction (urolithiasis) within the urinary tract (bladder or uterers).  If the rupture is large, the fluid would be very similar to urine (with fairly low cell counts and total protein) immediately after the rupture.  However, similar to biliary rupture, the free urine will then elicit an inflammatory response causing an exudative effusion. Similarly, a small lesion allowing urine to leak into the abdomen will induce a sterile peritonitis (unless there is a concurrent urinary tract infection).  A uroperitoneum can be confirmed by comparing creatinine levels in the fluid and serum (usually >2x higher in the fluid than serum). Although urea nitrogen concentrations are also likely to be high initially, urea is a small highly diffusable molecule so will equilibrate rapidly with serum urea, making it less useful than creatinine for confirming a uroperitoneum.

This can occur with trauma, obstructive, inflammatory or strangulating lesions, neoplasia, or a foreign body.  Similarly to biliary rupture and uroperitoneum, the majority of the effusion is caused by the resulting inflammation and exudation, with bacterial flora helping to trigger the inflammatory response. The presence of a mixed population of bacteria in neutrophils (including species normally found in the intestinal tract, such as Enterococcus or Peptostreptococcus) or food material on the cytologic smear can help confirm the rupture.  However, accidental sampling of intestinal contents during fluid collection (enterocentesis) can be confused with a GI rupture.  With enterocentesis, we do not expect to see an inflammatory response or intracellular bacteria and no peritoneal fluid cavity cells are seen. This does mimic samples collected immediately after a GI rupture (particularly if a large amount of GI fluid is released), the cytologic results may be indistinguishable from enterocentesis, since there has not been sufficient time for an inflammatory response. In these cases, GI rupture may be clinically suspected due to rapid deterioration of the patient, warranting either immediate surgical intervention or resampling after a few hours depending on the clinical severity of the patient’s illness. This illustrates that cytologic results should never be interpreted in isolation, but always in context of the patient.

Some neoplastic processes can lead to increased volumes of body cavity fluid, due to a variety of mechanisms (more than one mechanism may be operative with one tumor): 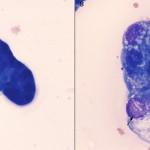 Not all types of tumor will exfoliate into effusions, thus tumor cells may or may not be identifiable in the fluid. Therefore, underlying neoplasia can rarely ever be ruled out as a cause for an effusion. Lymphoma and carcinomas are more likely to release diagnostic cells into cavity fluid than sarcomas (e.g. hemangiosarcoma).  Lymphoma typically exfoliates large numbers of cells into the fluid. Neoplastic cells can be readily identified if they are large, however if the lymphoma is comprised of small cells or only exfoliates low numbers of cells, the diagnosis may be more difficult and could readily be missed without more advanced diagnostic procedures, e.g. clonality testing. Carcinomas can be identified in fluids when there are clusters of adherent cells (some cells may be individualized), demonstrating cytologic criteria of malignancy, e.g. anisocytosis, anisokaryosis, multiple bizarre nucleoli, mitotic figures, etc.  However, it can be very difficult to distinguish carcinoma cells from non-neoplastic reactive mesothelial cells (since all of these cells are often in clusters) and impossible to distinguish from mesothelioma, but luckily, the latter are rare.