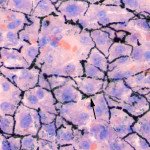 Cholestasis can be defined as the stoppage or suppression of bile flow.

There are several laboratory markers of cholestasis. These are:

The flow of bile is dependent on the active transport of bile acids via protein transporters into canaliculi creating an osmotic gradient and the patency of the biliary tract from the canaliculi to where the common bile duct enters the intestine. Cholestasis can therefore be associated with either a structural obstruction or a “functional” defect (affecting the function of bile acid transporters or osmotic gradient) to bile flow. Cholestasis causes major changes to hepatocytes, including leaky intracellular gaps (through which bile and its constituents can leak or “regurgitate” back into blood) and downregulation or reversal of protein transporters (which also cause regurgitation and decreased uptake of organic compounds, such as bilirubin and bile salts).

Structural cholestasis involve a physical impediment to bile flow. It can be intrahepatic or extrahepatic:

So-called “functional” cholestasis involve defects in the transporters needed for active transport of bile acids into the canaliculi, although recent evidence indicates that even in structural problems, cholestasis results from downregulated transporters. These are ATP-dependent and excretion is the rate limiting step in bilirubin metabolism e.g. Na/K ATPase. Functional cholestasis can occur if drugs, hormones, cytokines, endotoxins or excess free fatty acids (fatty acid toxicity) interfere with the hepatocyte transporters, responsible for bilirubin excretion (MRP2). 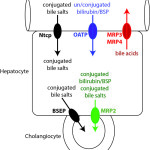 Alterations in hepatocyte transporters are thought to be the primary events in mediating hepatocellular cholestasis. Some transporters are present on cholangiocytes, although there is little known of these at present (e.g. uptake of bile salts from bile occurs via an apical or luminal sodium-dependent bile salt transporter; excretion into blood via multidrug resistance-associated protein 3 on cholangiocytes may have a role in returning bile salts to the systemic circulation during cholestasis).

Uptake on sinusoidal or basolateral membrane (from blood)

The following transporters are located on the blood sinusoidal or basolateral aspect of hepatocytes and take up substances from blood into hepatocytes.

There are other transport mechanisms, such as passive ionic diffusion. Some unconjugated bile acids are taken up by this mechanism.

Excretion into the canaliculi (bile)

Bile formation and flow is largely driven by excretion of bile salts, which are osmotically active and create a concentration gradient, which water follows allowing excretion of fluidic bile (called bile salt-dependent flow). Bile acid secretion is linked with excretion of the electrolytes, sodium, chloride, and potassium. There is also bile salt-independent bile flow, which is stimulated by a bicarbonate/chloride exchanger, which actively transports bicarbonate into bile, in exchange for chloride uptake. The latter exchanger is also found in cholangiocytes. Unconjugated bile salts, such as ursodeoxycholate (which is used to treat some cholestatic conditions) promote bile salt-dependent flow through stimulating this transporter.

The active excretion of compounds into the biliary canaliculi is the rate limiting step for bile formation. Excretion is accomplished by the following ATP-dependent transporters, which unlike some sinusoidal transporters, only work one way (that is excretion of solutes into bile and not vice versa).

Defects in these transporters occurs under the following situations:

The following laboratory findings are helpful for recognizing the presence of cholestasis in an animal: