Bilirubin is considered a test of hepatic function, in essence the ability of the hepatocyte to take up unconjugated bilirubin in blood, conjugate it (render it water-soluble) and excrete bilirubin into bile, where it is broken down in the intestine by bacteria. However, in reality, bilirubin is not used as a test of the functional capacity of the liver (rather bile acids and ammonia are the more common tests used for this) but more as a marker of liver disease (with and without cholestasis) and as supportive evidence for a hemolytic anemia. Although we usually think of bilirubin in terms of its diagnostic utility (i.e. to support a diagnosis of hemolytic anemia or hepatobiliary disease), bilirubin is actually an anti-oxidant, which is its main physiological function.

There are two main forms of bilirubin in blood as determined by the Van den Bergh reactions (reaction with diazo dyes): 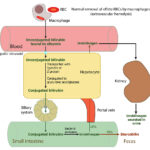 The majority of bilirubin (80%) is produced from the degradation of hemoglobin from erythrocytes undergoing normal (removal of aged or effete cells) or abnormal destruction (i.e. intravascular or extravascular hemolysis) within mononuclear phagocytes (principally splenic, hepatic and bone marrow macrophages). A small percentage (20%) is derived from the catabolism of various hepatic hemoproteins (myoglobin, cytochrome P450) as well as from the overproduction of heme from ineffective erythropoiesis in the bone marrow.

Within macrophages, a free heme group (iron + porphyrin ring) is oxidized by microsomal heme oxygenase into biliverdin and the iron is released (the iron is then stored as ferritin or released into plasma, where it is bound to the transport protein, transferrin). Biliverdin reductase then reduces the green water-soluble biliverdin into unconjugated (water-insoluble but lipophilic) bilirubin. Heme oxygenase is also located in renal and hepatic parenchyma, enabling these tissues to take up heme and convert it to bilirubin. Birds lack biliverdin reductase, thus they excrete heme breakdown products as biliverdin rather than bilirubin.

Unconjugated bilirubin is then released into plasma where it binds to albumin. Uptake of unconjugated bilirubin occurs in the liver and is carrier-mediated and passive. The transport protein is currently unknown, but is generally believed to be organic ion transporting polypeptide (OATP) transporter. This protein, on the sinusoidal membrane of hepatocytes, also transports unconjugated bile acids and dyes such as bromosulphalein (BSP) from the blood into the hepatocyte. Once within the hepatocyte mitochondria, unconjugated bilirubin is transported with ligandin (Y protein or glutathione-S-transferase A) or other proteins (e.g. fatty acid binding protein) and the majority is conjugated to glucuronic acid by UDP-glucuronyl transferase (from the UGT1A1 gene). The remainder is conjugated to a variety of neutral glycosides (glucose, xylose). In the horse, the majority of bilirubin is conjugated to glucose. Bilirubin must be conjugated before it can be excreted into bile (conjugation makes bilirubin water soluble, because it breaks apart the hydrogen bond within the molecule, which keep it hydrophobic and in so doing, makes the central methylene group available to the diazo reagent for measurement). The UDP glucuronyl transferase has been identified in rat and canine kidney, supporting the possibility that canine renal tubular epithelial cells can take up heme, convert it into bilirubin and conjugate it. Conjugation also inhibits binding to albumin and other intracellular proteins. Excretion into biliary canaliculi is the rate-limiting step of the entire bilirubin metabolism pathway and occurs on the canalicular membrane of the cell via a specific transporter, multidrug-resistance associated protein-2 (MRP2), which is energy (ATP) dependent. Transfer into the canaliculi is facilitated by the osmotic force generated by bile salt-dependent and bile salt-independent biliary flow (which is mediated by a chloride-bicarbonate exchanger, which pumps bicarbonate into bile). The force for most of the transporters (on the sinusoidal or canalicular membranes) is generated by a sinusoidal Na+/K+ATPase pump (pumps sodium into the cell and potassium into the extracellular fluid or blood). Bilirubin is transported actively into bile against a concentration gradient (for an image of the bilirubin transporters, refer to the cholestasis page).

Bilirubin is excreted, along with bile salts (and sodium) into the intestine, where bile salts form micelles facilitating absorption of fat. Because conjugated bilirubin is hydrophilic, it cannot be absorbed across the intestinal epithelial barrier. In the intestine, bacterial and intestinal enzymes reduce conjugated bilirubin to urobilinogen. Urobilinogen is re-absorbed (about 10%) or broken down (90%) into urobilin and stercobilin (both of which are excreted in the feces). Of the resorbed urobilinogen, most is taken up by the liver (enterohepatic circulation, i.e. the urobilinogen is absorbed into the portal vein, taken up by the liver and re-excreted into bile – this re-excretion into bile is not depicted in the image above), while the rest bypasses the liver and is excreted into the urine (so small amounts of urobilinogen are found in urine). Bacterial enzymes can also deconjugate bilirubin and the unconjugated bilirubin can be absorbed as well.

Conjugated bilirubin is measured similarly, using a diazo method based on the Jendrassik-Grof procedure, which uses nitrous acid to form the diazonium ion, which binds to conjugated bilirubin in an acidic pH forming azobilirubin, which is red and can be measured spectrophotometrically in an end-point reaction.

Conjugated bilirubin can be measured in the same reaction by omitting the solubilizing agent (since it is already in a conformation where the diazo dye can react – this is because conjugation itself disrupts those hydrogen bonds). Unconjugated bilirubin is then calculated from the formula:

Note, that other analyzers (e.g. dry chemistry analyzers) can measure both delta bilirubin and unconjugated bilirubin directly, but ours cannot.

The concentration of bilirubin is measured in mg/dL (conventional units) and μmol/L (SI units). The conversion formula is shown below:

The sample must be protected from light, because bilirubin is readily oxidized.

Clinical icterus is observed when total bilirubin concentrations exceed 3 mg/dL (Joseph and Samant 2021). Note that icterus and cholestasis are not  synonymous. Icterus just means a high enough bilirubin to be seen by the naked eye on mucous membranes or in plasma/serum and can result from cholestasis or other causes of hyperbilirubinemia (e.g. hemolytic anemia). You can, of course, have hyperbilirubinemia without visible icterus. 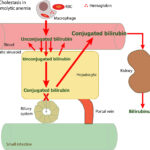 Bilirubin in a hemolytic anemia with cholestasis 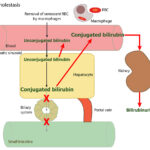 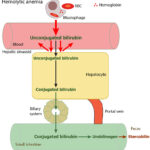 Bilirubin in a hemolytic anemia

At Cornell University, we interpret changes in total (and direct and indirect) bilirubin concentrations based on pathophysiologic processes which are:

Note that the following terms are used in some clinical pathologic textbooks to characterize changes in total bilirubin (or icterus): pre-hepatic, hepatic and post-hepatic.

Cornell University is one of the few laboratories that provides results for unconjugated (indirect) and conjugated (direct) bilirubin on our small and large animal chemistry panels. Some clinicians and clinical pathologists do not find the bilirubin split useful because results do not always go cleanly as one would predict from the “pre-hepatic”, “hepatic” and “post-hepatic” classification scheme. This is because in any disease, more than one of the above 4 pathophysiologic processes may be occurring at any given time or may develop over time. For instance, with the first three pathophysiologic processes, unconjugated (indirect) bilirubin frequently exceeds conjugated (direct) bilirubin. However, with hemolytic anemia, particularly in dogs, cholestasis does occur and can dominate the liver biochemical findings (more conjugated than unconjugated bilirubin). In cholestasis, conjugated bilirubin will usually exceed unconjugated bilirubin (except in equidae – see below). However, with decreased bile flow, bile acids accumulate and injure the liver, resulting in increased concentrations of unconjugated bilirubin, which can dominate in some animals. Thus, various combinations of increases in indirect and direct bilirubin may be seen in any one animal. We do find the bilirubin split somewhat useful (which is why it is still included on our chemistry panels), as long as it is interpreted in context of the patient and the rest of the clinical pathologic and other diagnostic testing results.

The bottom line is that if unconjugated bilirubin is higher than conjugated bilirubin, any of the above 4 mechanisms can be operating, but cholestasis is unlikely to be dominating (except in the horse), even though it may be occurring. Rather, increased production, defective uptake and/or conjugation is the dominant process. The results are not specific for any disease, but one should think of the following conditions first (and then find evidence to support their existence): Fasting or anorexia in a horse or ruminant, hemolytic anemia (if evidence of anemia due to hemolysis or reduced red blood cell lifespan) and liver disease. On the other hand, if conjugated bilirubin is higher than unconjugated bilirubin, cholestasis is the dominating pathologic process (since the liver can take up and conjugate the unconjugated bilirubin) and the animal should be examined for causes of cholestasis (intrahepatic and extrahepatic, structural and “functional” not just extrahepatic). Increases in conjugated bilirubin are not specific as to cause, since this can occur secondary to a hemolytic anemia (in dogs with immune-mediated hemolytic anemia and foals with neonatal isoerythrolysis, in particular), parenchymal liver disease that interferes with biliary excretion by affecting bile transporters or physically impeding bile flow, sepsis (inflammatory cytokines impair biliary excretion by downregulating bile transporters and upregulation of nitric oxide secondary to inflammatory cytokines inhibits secretion of bile by biliary ductules), and physical obstructions to bile flow in the biliary system (e.g. cholelithiasis) or too thick bile that does not flow well (bile sludging, e.g. in cats with dehydration). With extrahepatic bile duct obstruction or biliary rupture, levels of conjugated bilirubin are typically higher than unconjugated or indirect bilirubin and produces marked increases in total bilirubin in dogs and cats (20-30 mg/dL). Horses with naturally occurring diseases causing cholestasis are an exception. In this species, direct bilirubin concentrations are increased in cholestasis but are typically lower than the increases in indirect bilirubin concentrations (the direct bilirubin proportion is usually <50% of total bilirubin and often <25-30% of the total bilirubin concentration) (Traub et al 1982, McGorum et al 1999, Peek and Divers 2000, Johnson et al 2006). In contrast, direct bilirubin dominates the total bilirubin split in horses with experimental ligation of the bile duct (Bauer et al 1990). 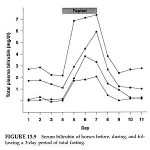 Increased concentration of total bilirubin and its components