The enzyme γ-glutamyl transferase (GGT) cleaves C-terminal glutamyl groups from amino acids and transfers them to another peptide or to an amino acid. It is important in glutathione metabolism (reduced and oxidized GSH are the main targets), amino acid absorption (cysteine in the kidney), and protection against oxidant injury (Hanigan 2014). GGT is found in many tissues and being membrane-associated, particularly in cells lining organ lumens, its activity is largely restricted to luminal contents. The main source of serum GGT activity is the liver (primarily biliary epithelium), thus GGT is used as a marker of  biliary hyperplasia, structural cholestasis (which induces biliary hyperplasia) and biliary necrosis (Bulle et al 1990).

Half life is unknown (3 days is an estimate in horses) (Hoffman).

GGT is a transmembrane protein and is expressed on the cell membrane, with expression being restricted to the luminal surface of the cell. A small portion (< 5%) is found in the cytoplasm. Solubilization of the membrane with bile acids and increased synthesis result in increased activity in serum, with increased synthesis being secondary to biliary hyperplasia from structural cholestasis (e.g. extrahepatic bile duct obstruction), resulting in increased biliary pressure, or drugs (Bulle et al  1990). The highest concentrations are found in kidney, pancreas, intestine and mammary glands (the latter in dog, cattle, sheep and goats). In one study in calves and horses, the highest activity in calves was seen in the kidney, followed by the pancreas, liver, lung, small intestine and brain, with very little in skeletal or cardiac muscle. In horses, the highest activity was seen in the kidney followed by the liver, pancreas, brain with low activity in other tissues, including mammary gland, skeletal muscle, small intestine and lung (Barakat and Ford 1988). In the liver, it is found primarily on biliary epithelial cells, with small amounts on canalicular surfaces of a few periportal hepatocytes in rats (Bulle et al 1990, Hanigan 2014). Hepatocyte expression of GGT is species-dependent, as GGT is not normally expressed on hepatocytes in mice (Hanigan 2014).

Enzyme activity is measured in U/L (U = international unit) and µkat/L (SI units), which is defined as the amount of enzyme that catalyzes the conversion of 1 µmol of substrate per minute under specified conditions.  Conversion formula is shown below:

In adult animals, this is generally thought to reflect biliary hyperplasia and cholestasis (with bile acids solubilizing GGT off membrane surfaces or cholestasis inducing biliary hyperplasia) (Hoffman). Biliary necrosis can also increase serum activities. Measurement of GGT activity can be a marker of passive transfer of immunity in some species, such as cattle but not horses or camelids. Cancer cells in humans can express GGT, with expression not being restricted to the luminal side of the cell membrane, and GGT may support cancer growth by facilitating amino acid uptake. High serum GGT activity is found mostly in humans with hepatocellular carcinomas but also in those with metastatic liver cancer. Oxidative stress and drugs can stimulate production of GGT in several tissues, such as the lungs and liver, but this may not result in increased GGT activities in serum or plasma (Hanigan 2014). 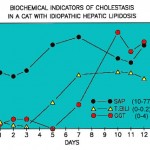 Biochemical indicators of cholestasis in a cat with hepatic lipidosis