Alkaline phosphatase (ALP, AP) is a non-specific metallo-enzyme which hydrolyzes many types of phosphate esters at an alkaline pH in the presence of zinc and magnesium ions. The main use of ALP is as a sensitive indicator of cholestasis in the dog (it will increase before bilirubin), however it is non-specific because corticosteroids (exogenous or endogenous “stress”) induces production of this enzyme, with subsequent increases in serum or plasma activity. In the cat however, ALP is a specific indicator of liver disease, whereas in large animals, the enzyme is less useful as it is insensitive, cholestatic disorders are infrequent, and reference intervals are quite broad.

Isoenzymes and isoforms of ALP

There are two isoenzymes (products of different genes) and several isoforms (produced from post-translational modification of isoenyzmes) of ALP. The isoenzymes are produced from intestinal and tissue non-specific ALP genes and differ in amino acid sequence. Isoforms differ in catalytic sites and activity, immunogenicity, and electrophoretic mobility. The major isoforms that can be measured in animals are liver-ALP (L-ALP), corticosteroid-ALP (C-ALP; only in dogs), bone-ALP (B-ALP) and intestinal-ALP (I-ALP), but there are others including leukocyte-ALP and placental-ALP. 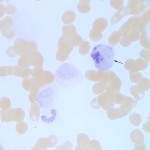 ALP is a cell membrane-bound protein that is present in many tissues. It is anchored to cell membranes by glycophosphatidylinositol (GPI) proteins. Cleavage of these proteins by bile acids, phospholipase D and proteases releases ALP from membranes resulting in increased ALP activity in serum/plasma.

The half life of ALP varies depending on the source (isoform) and species (Hoffman and Dorner 1977, Hoffman et al 1977). Isoforms with longer half-lives contribute more to normal and increased levels of serum or plasma ALP, i.e. increased levels of isoforms with very short half life (minutes versus days) are unlikely to be observed on a single blood sample (since the peak may be missed and values will rapidly decreases).

Below is the method used to measure total ALP activity on our chemistry analyzer at Cornell University.

Enzyme activity is measured in U/L (U = international unit) and µkat/L (SI units), which is defined as the amount of enzyme that catalyzes the conversion of 1 µmol of substrate per minute under specified conditions. The conversion formula is shown below:

Routine measurement of ALP gives total serum activity (all isoforms) without specificity as to source. In healthy animals, L-ALP is the predominant isoform in blood, followed by B-ALP. The proportion of B-ALP is higher in young animals (indicates osteoblastic activity with growth). The C-ALP isoform contributes only a small amount to total serum ALP activity. The proportion of C-ALP increases with age in dogs.

Isoform measurement is most commonly applied to canine samples to distinguish L-ALP and C-ALP isoforms in cases with increased total serum ALP activity of uncertain cause (to identify whether total ALP is increased due to liver disease or endogenous corticosteroids). However, this is not a very reliable test for this purpose, because any chronic disease (including that affecting the liver) can result in endogenous corticosteroid release (chronic stress), which would increase C-ALP.

We  are most concerned about increases in ALP activity, however an unexpectedly low ALP activity (e.g. young  growing animal) may be a marker of growth hormone deficiency (Bakhtiani and Burgener 2019), but is unlikely to be specific for this. 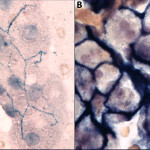 Increases in serum ALP activity are usually due to the liver, bone and corticosteroid-inducible isoforms (remember, dogs are the only species which have a steroid-inducible isoform). Therefore we attribute high ALP activity due to cholestasis, increased osteoblastic activity (not osteolysis) and steroids (dogs only). Increased ALP in serum or plasma due to increases in other isoforms are rare, likely because the enzyme gets released into the lumen of organs or has a very short half-life (see table above).

Please refer to the GGT page for some tidbits on interpreting some changes in these two cholestatic enzymes.