There was a marked leukocytosis comprised mostly of immature cells (coded as “other WBC”; 89%) and mature monocytes (8%) (Figures 1-3). The immature cells were predominantly large (15-17 µm) with a few smaller cells (11-13 µm). They had slightly eccentric round to oval to irregular to indented nuclei with fine chromatin. They were demonstrating monocytic differentiation (Figures 2-3 below), with numerous cells between blasts and immature monocytes (promonocytes). The immature cells and mature monocytes had small to moderate amounts of blue-gray cytoplasm that contained low numbers of small vacuoles. A few large reactive lymphocytes were noted and there were low numbers of echinocytic erythrocytes. The thrombocytopenia was confirmed on smear examination. Rare dysplastic neutrophils (larger in size) were identified (not shown), however dysplasia was not evident in platelets or erythrocytes. Since there were >20% immature cells or blasts, the diagnosis was an acute leukemia. Due to the features of monocytic differentiation, an acute myeloid leukemia (AML) was favored over an acute lymphoblastic leukemia (ALL) (Question 1).

Note that the automated analyzer at the veterinary clinic erroneously identified blasts as lymphocytes and overestimated the monocyte percentage. We have found that automated differential counts are generally inaccurate and cannot differentiate reliably between an acute leukemia (consisting of blasts) and a chronic lymphocytic leukemia (consisting of mature lymphocytes). Since these leukemias have very differing prognosis (poor for an acute leukemia and better for a chronic lymphocytic leukemia), automated differential counts should not be relied upon for making a diagnosis. Nothing beats a blood smear examination by the human eye. 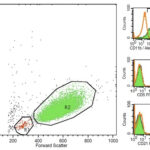 To determine the lineage of the leukemia, flow cytometric analysis and cytochemical staining was performed (Question 2). For flow cytometry, the cells were labeled with antibodies against feline T cell markers, including CD4 (mouse-IgG1-FITC, clone vpg34, BioRad), CD8 (mouse-IgG1-PE, clone vpg9, BioRad), and CD5 (mouse-IgG1-FITC, clone FE1.1B11, BioRad), the B cell marker, CD21 (mouse-IgG1-APC, clone B-Ly4, BD Pharmingen), and the myeloid markers, CD14 (monocytes; mouse-IgG2a-PE, clone TUK4, Dako), and CD11b (neutrophils/monocytes, mouse-IgG1-unconjugated, clone CA16.3E10, BioRad) and analyzed with a flow cytometer (BD FACS Caliber). The latter antibody was detected with a goat-antimouse FITC-conjugated secondary antibody (Jackson Immunoresearch). Two cell populations were identified on the forward and side scatter plot, consisting of small lymphocytes (R1, red) and tumor cells (R2, green), respectively. Events in the tumor gate had a median forward scatter of 546 units, equivalent to large cells and the cells were only positive for CD11b (99%) (Figure 4). The residual small lymphocytes in the R1 gate were positive for CD5 (35%, T cells), which consisted of a mixture of CD4 positive (20%, helper or regulatory T cell) or CD8 positive (4%, cytotoxic T cell) T cells, and CD21 (52%) B cells. There was an altered (inverted) T to B cell ratio (1:1.5; normal is approximately 4:1 T:B) that could reflect an expansion of B cells or a decrease in T cells (latter considered more likely). The CD4:CD8 ratio (5:1) is also higher than the usual 2:1 ratio, suggesting reduced proportions of CD8-positive T cells within peripheral blood. This may reflect suppression of anti-tumor immunity. The positive reaction for CD11b and negative reactions for the lymphoid antigens, CD5 and CD21, supported our presumptive diagnosis of AML. 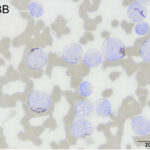 The following cytochemical stains were performed on venous blood smears of the patient as well as venous blood smears from a canine control: Alkaline phosphatase (ALP), alpha naphthyl butyrate esterase (ANBE), chloroacetate esterase (CAE), and Sudan Black B (SBB). For each stain, the percentage of positively stained cells was determined from a 100 tumor cell count. The tumor cells were positive for SBB (34%) and ANBE (22%) (Figure 5). The tumor cells were negative for ALP (<1%, not shown) and CAE. Internal controls stained as expected with neutrophils being positive for SBB and CAE, and negative for ALP and ANBE. A few mature lymphocytes were focally positive for ANBE and negative for the other stains. The staining characteristics for eosinophils and basophils were not evaluated since very few to none of these cells were observed. The canine control smears had positive leukocytes that stained as expected (neutrophils positive for CAE and SBB, monocytes positive for ANBE, eosinophils positive for ALP).

A final diagnosis of AML-not otherwise specified, sub-type acute monoblastic leukemia, was made. After being given a poor prognosis, the owners elected to not pursue any further testing, such as a bone marrow aspirate or repeat FeLV testing. A single injection of Depo-Medrol (20 mg) was given as palliative care. The patient was represented several days later for euthanasia due to lack of improvement in clinical signs. A post-mortem examination was not performed.

Acute leukemia arises from mutations in various genes within the hematopoietic stem cell and is generally divided into AML or acute lymphoblastic leukemia, based on phenotypic markers of differentiation. Acute myeloid leukemia encompasses erythrocytic, granulocytic, monocytic, megakaryocytic or mixed myeloid lineages and generally arises in the bone marrow, although extramedullary myeloid sarcomas, where the tumor is found primarily in extramedullary sites such as the mediastinum and lymph nodes, can precede an overt AML. Acute lymphoblastic leukemias express lymphoid markers, such as CD21 or CD22 for B cells and CD3 for T cells. Acute leukemias that display markers of lymphoid and myeloid lineages (in the same or different cell populations) are called mixed lineage or biphenotypic acute leukemia, whereas those that lack features of differentiation are called acute undifferentiated leukemia.1

Over the years, 2 schemes were developed and revised for classification of myeloid neoplasms, including AML, in humans – the French-American-British and National Cancer Institute (FAB-NCI) classification system and the World Health Organization (WHO) classification system. The FAB-NCI classification system, developed in the 1970s, was based on morphologic features and cytochemical staining patterns of the tumor cells to classify the type of AML,2 whereas the updated revised WHO classification system uses morphologic features, immunophenotyping, cytochemical staining and molecular genetic analysis with mutation detection to categorize AML.1 In 1991, veterinary clinical and anatomic pathologists formed the Animal Leukemia Study Group (ALSG) and applied the alphanumeric FAB-NCI classification scheme to AML in animals (Table 2).3 This classification scheme used morphologic features and cytochemical staining characteristics to designate the different types of AML and the ALSG applied the scheme to a core case set of myeloid neoplasms in dogs and cats.2,3 In this scheme, AML was differentiated from myelodysplastic syndrome by a blood and/or bone marrow blast count of >30%. Since then, the cut-off for a diagnosis of AML has been reduced to >20% in the WHO criteria1 and this lower cut-off is being used more frequently in veterinary medicine. Genetic testing for AML is still in its infancy in veterinary medicine. One study found a BCR-ABL translocation in one dog with AML,4 which is similar to a translocation that defines chronic myeloid leukemia in human patients. The BCR-ABL mutation (also called the Raleigh chromosome) has also been detected in dogs with chronic myeloid leukemia.5 Mutations in the oncogenes, c-KIT and K-RAS, have been identified in a small cohort of dogs with AML.6 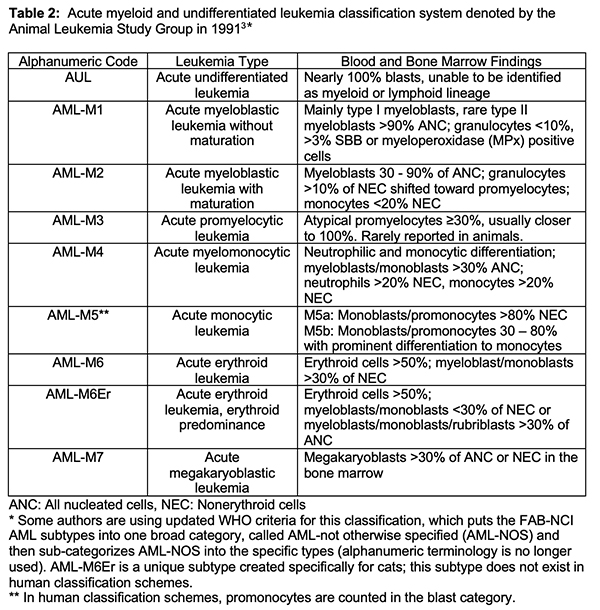 In cats, FeLV is commonly associated with the development of various hematopoietic neoplasms.7 FeLV is a retrovirus that can insert a DNA copy of its RNA-based genome into the host’s DNA. Although the viral DNA only encodes genes that are needed to reproduce the virus, insertion of the viral DNA upstream from a host oncogene can lead to leukemia.8 As seen in our case, myeloid neoplasms have been reported in cats that have tested negative for FeLV.9 At our institution, we see far fewer cases of myeloid neoplasms, which are most frequently of erythroid lineage, in cats since the advent of FeLV vaccination.

The AML was a serendipitous finding in this cat, although it likely contributed to the lethargy and decreased appetite reported by the owners. The upper respiratory tract and ocular signs cannot be directly attributed to the AML and are more likely due to a concurrent viral infection. Presenting clinical signs with AML are usually non-specific, consisting of weight loss, inappetence, lethargy, vomiting and diarrhea. The leukemia is typically uncovered on routine hemogram testing, which typically reveals many circulating tumor cells and concurrent cytopenias (non-regenerative anemia, neutropenia and thrombocytopenia). However, animals can present with a pancytopenia, necessitating bone marrow aspiration for diagnosis.10,11

To confirm our suspicion of an AML with monocytic differentiation, we performed flow cytometric analysis and cytochemical staining on the patient’s venous blood. Available antibodies for immunophenotyping in cats are limited but we did find a positive reaction for CD11b. This is the alpha chain of an integrin that is expressed on leukocytes with a common beta chain (CD18) (there are four such integrins on leukocytes). CD11b is typically expressed on neutrophils and monocytes but is not expressed on lymphocytes in cats or dogs (personal observations). At our institution, CD11b has been a helpful marker for diagnosis of AML in dogs, with rare positive results in lymphoid neoplasms.10,12 The tumor cells were negative for CD14, which is a marker for mature monocytes in dogs and cats. It is possible that the tumor cells were too immature to express CD14 or had dropped off expression as part of neoplastic transformation. Due to the general lack of antibodies for myeloid antigens, cytochemical staining remains a useful adjunctive technique for confirming the diagnosis of AML, with staining in >3% of the tumor cells being considered a positive reaction.1,3 In this case, the tumor cells were positive for ANBE and SBB, corresponding to the expected staining reactions of feline monocytes.13 Thus, the limited immunophenotyping and cytochemical staining results supported our morphologic diagnosis of acute monoblastic leukemia in this case. Although the patient’s negative FeLV status was not confirmed with repeat testing, this case represents an uncommon occurrence of acute monoblastic leukemia in a young, presumptively FeLV-negative, cat.

Authors: Dr. Shelley Chu (resident), edited by T Stokol. This case was selected as a bonus slide as part of the mystery slide session at the 2020 American College of Veterinary Pathologists and American Society of Veterinary Clinical Pathology annual meeting.