The smears consisted of thick bloody proteinaceous droplets with many mixed inflammatory cells, low to moderate numbers of spindle cells, and moderate numbers of multinucleated giant cells. The latter cells had uniform round to slightly oval nuclei, single nucleoli and pink grainy cytoplasm, resembling osteoclasts. The inflammatory cells were a mixture of moderate to many lymphocytes and macrophages, with moderate numbers of non-degenerate neutrophils, low numbers of eosinophils and plasma cells, and rare mast cells. The lymphocytes were mostly small cells, a few of which contained red cytoplasmic granules, with several large reactive forms. The macrophages were erythrophagocytic and many contained abundant hemosiderin in their cytoplasm. A few macrophages were binucleated. Several of the OCLGC also contained erythrocytes and hemosiderin in their cytoplasm. The spindle cells were found in small aggregates, some of which were thick and dense, and individually. Many had relatively bland cytologic features, displaying mild anisocytosis and mild to moderate anisokaryosis, but rare cells had quite large nuclei and nucleoli (Figures 1-4). The differential diagnoses for the cytologic findings were a giant cell tumor of soft parts and an inflammatory reaction with hemorrhage and granulation tissue, e.g. secondary to trauma with hematoma formation or an excessive reaction to an insect bite or other unknown allergen with secondary trauma. Since multinucleated giant cells resembling osteoclasts are not usually seen in inflammatory reactions from horses, an underlying giant cell tumor of soft parts was suspected. Unfortunately, no follow up was obtained.

Baseline ACTH, insulin and thyroid hormone (T4) concentrations were within reference intervals. The results of the baseline testing for ACTH and insulin argued against PPID, but do not rule out equine metabolic syndrome, although dynamic testing (done in winter in upstate NY) would be more informative (measurement of ACTH before and 10 minutes after administration of thyroid releasing hormone). Leptin concentrations were high (21.7 ng/mL, reference interval, 1-10 ng/mL), indicating adiposity.

Giant cell tumor of soft parts, a soft tissue tumor of low malignant potential, has been reported mostly in horses over 10 years of age (range, 3-23 years) in multiple breeds and both sexes. The tumors arise in the dermis or subcutaneous tissue of the upper extremities, particularly the hind legs, but can also be seen on the thorax, flank, abdomen, neck and head. They are rare tumors in the horse (albeit the most common tumor occurring on the limbs1) and usually form locally infiltrative single or multinodular masses.2-9 Most of the tumors are associated with hemorrhage, with many hemosiderin-laden macrophages, and areas of necrosis have also been reported.2,4,6,8,9 On cytologic examination of two cases, the tumors consisted of a mixture of spindle cells, showing mild to moderate anisocytosis and anisokaryosis, and multinucleated giant cells, many of which had >20 round nuclei.8,9 In one case, histiocytes showing features of atypia were also noted, along with small amounts of matrix.9 Smears from the aspirated masses also contained lymphocytes and plasma cells, along with hemosiderin-containing macrophages, indicating hemorrhage. These cytologic features were also seen in this case, although the multinucleated giant cells resembled osteoclasts, based on the pink tinge to the cytoplasm and uniform round nuclei with single nucleoli. The multinucleated giant cells in the other two cases were described as having basophilic cytoplasm,8,9 although they had similar nuclear features to the OCLGC seen in the case herein. Phagocytic activity and hemosiderin was seen in the multinucleated giant cells of this report, but was not described for the previous two reports.8,9 In none of the cases, did the macrophages contain vacuoles (e.g. consisting of ingested lipid or phagolysosomes) in their cytoplasm, arguing against foreign body type macrophages, and for OCLGC. This distinction, although semantic, may be important, because OCLGC are not a feature of granulomatous inflammatory lesions in horses, e.g. eosinophilic granuloma, granulomatous dermatitis with equine herpes virus-2 inclusions,10 and have not been identified as infiltrating cells in other tumor types, leading to the suspected diagnosis of a giant cell tumor of soft parts in this case. However, it is still possible that the mass represented an unusual mixed inflammatory reactions, since OCLGC are reactive cells of myeloid (monocyte, dendritic cell) origin.11,12

On histologic examination, giant cell tumor of soft parts consist of a mixture of spindle cells and multinucleated giant cells in a variably dense collagenous stroma with areas of hemorrhage and aggregates of lymphocytes and plasma cells; features also seen in the cytologic smears. Low numbers of other inflammatory cells, including neutrophils and eosinophils, may be seen.6 Tumors are well-circumscribed and can be encapsulated. They are locally invasive but have a low mitotic rate.2-9 Although only low numbers of horses have been diagnosed with this tumor, with only two small case series, the tumor shows benign behavior, despite being called malignant in a few prior reports.4,6,7 Local recurrence has been noted in only a few cases, despite incomplete surgical excision and the tumors have not metastasized.2,3 Immunohistochemical staining showed CD11c9 or CD182 expression in the multinucleated giant cells, supporting their myeloid and likely reactive origin, versus the presumed neoplastic spindle cells, which are negative for the myeloid markers but positive for vimentin.2,6,9 One report also showed that the spindle cells and multinucleated giant cells can express vimentin.6 The multinucleated giant cells have been considered part of the neoplastic population in previous reports,4,6 however, they are considered reactive by most authors.2,11,12 Per World Health Organization criteria, they are classified as fibrohistiocytic tumors of low malignant potential.13 These tumors have also been previously referred to as malignant fibrous histiocytomas,6,7 a term that has fallen out of favor. 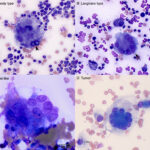 There are several different types of giant cells, including those derived from the common myeloid progenitor (monocytes, macrophages, dendritic cells, osteoclasts), and tumor cells. Of the myeloid-derived giant cells, 4 different variants are seen in cytologic and histologic sections – foreign body giant cells, Langhans cells, Touton giant cells and OCLGCs or osteoclasts (Figure 5). The first three types are differentiated by the arrangement of nuclei; haphazardly arranged in foreign body giant cells; peripheralized semi-circular to circular arrangement in Langhans cells, and a centralized circular pattern surrounded by vacuolated lipid-laden cytoplasm in Touton giant cells.12 OCLGCs or osteoclasts have randomly dispersed round to oval nuclei with single nucleoli. On cytologic smears, they usually have pink grainy cytoplasm or cytoplasm containing pink-red to purple granules with relatively uniform nuclei, although this pink granulation is stain dependent. Unlike foreign body macrophages, they usually lack cytoplasmic vacuolation or phagocytic activity (as noted above, the erythrophagia and hemosiderin in the OCLGC in this case are an exception but attests to their monocytic or histiocytic lineage). The cytoplasmic and nuclear features help discriminate them from foreign body macrophages, which usually have bluer cytoplasm with cytoplasmic vacuoles and more irregularly shaped and often larger nuclei showing mild intracellular anisokaryosis in cytologic samples (Figure 5). The granules are less discernible in histologic sections, in that osteoclasts and OCGLCs have pale eosinophilic cytoplasm. Osteoclasts and OCGLCs are differentiated by location. Osteoclasts are found on the surfaces of bone, whereas OCGLCs are not bone-associated and can be found in boney or extramedullary lesions.11

In humans, OCLGC are seen in various inflammatory and neoplastic conditions, including giant cell granulomas, aneurysmal bone cysts, and giant cell tumors of bone, soft tissue and tendon sheaths.11,12 OCLGC are also seen in the genetic disorder, cherubism, where maxillary bone in the face is replaced by proliferating fibroblasts and OCLGC in a fibrous stroma, due to mutations in the adaptor protein, SH3BP2.14 In animals, OCLGC are seen in specific reactive or inflammatory entities, such as the peripheral giant cell granuloma (which used to be called the giant cell epulis of bone) in dogs and cats15,16 and reparative granuloma of bone, a rarely reported condition in dogs.17 They are also a prominent component of certain soft tissue tumors, including giant cell tumor of soft parts in horses and rarely dogs, giant cell tumors of tendon sheaths in cats18 and variants of vaccine-induced sarcomas in cats.19 Giant cell tumors of bone (also called “osteoclastomas”) have been reported in dogs and cats,4,17,20,21 with one report in a horse.22 These are difficult to distinguish from giant cell-rich variants of osteosarcoma23-24 (and prior reports may have been the latter20), but in humans, the giant cell tumors of bone are benign versus exhibiting more aggressive behavior that is typical of osteosarcoma.25 We and others12,26 have seen OCLGC in other mesenchymal, epithelial or hematopoietic tumors, e.g. lymphoma, in dogs and cats and in joint fluid aspirates, usually from horses. In the latter, we have attributed their presence to damage to cartilage exposing osteoclasts in subchondral bone, but it is possible that they represent a reactive variant of synovial histiocytes. The presence of OCLGC in tumors not associated with bone formation or osteolysis likely indicates a reactive or potentially paraneoplastic response due to a favorable microenvironment for osteoclastogenesis.

As stated above, osteoclasts are normally derived from a common myeloid progenitor in the marrow that gives rise to monocytes, macrophages and dendritic cells, under the influence of macrophage-colony stimulating factor (M-CSF), which upregulates expression of the receptor, receptor activator of NF-κβ or RANK. When RANK on osteoclast progenitors binds its ligand, RANKL, which is produced by stromal and immune cells, osteoclast formation is promoted via activation of the transcription factor, nuclear factor activated T cell c1 (NFATc1). Osteoclastogenesis is also dependent on NF-κβ as well as calcium signaling mediated by co-stimulatory molecules.11,12,27 RANK/RANKL also stimulates fusion of osteoclast precursors to form the multinucleated differentiated cell – fusion requires filopodia formation, cell migration and fusion, with sharing of cytoplasmic constituents. Adhesion molecules, such as E-cadherin and dendritic cell-specific transmembrane protein (DC-STAMP), are involved in fusion, with the latter being upregulated by RANK-induced NFATc1 binding to its promoter.11,27 Osteoclasts and OCLGC express monocyte/dendritic markers, such as the mannose receptor (CD206) and the scavenger receptor, CD68. In humans, they also highly express tartrate-resistant acid phosphatase on cytochemical staining and carbonic anhydrase II, and the calcitonin receptor on immunohistochemical staining.11,12 The latter, which is induced by RANK signaling, may help differentiate osteoclasts from other myeloid-derived giant cells.12 OCLGC are usually identified in histologic sections from human patients with immunohistochemical staining for CD68.11 There are no reports of ionized binding calcium binding adaptor protein 1 (Iba1) expression in osteoclasts or OCLGC. In inflammatory or neoplastic extramedullary lesions, OCLGC are thought to be derived from monocytes or myeloid progenitors recruited under the influence of inflammatory cytokines, such as tumor necrosis factor-α and interleukin-1β.11,12 There is also evidence that they can form locally from dendritic cells.28,29 High concentrations of RANKL, likely produced by stromal cells, tumor cells or infiltrating T cells, stimulate osteoclastogenesis, although inflammatory cytokines may be able to induce osteoclastogenesis from macrophages in a RANKL-independent fashion.11,27 Although these giant cells can dominate in a tumor, leading to a giant cell tumor designation, given the fact that they are considered a reactive population versus part of the initiating tumor,2,12,25 the adjective giant cell-rich tumor may be preferable to giant cell tumor.