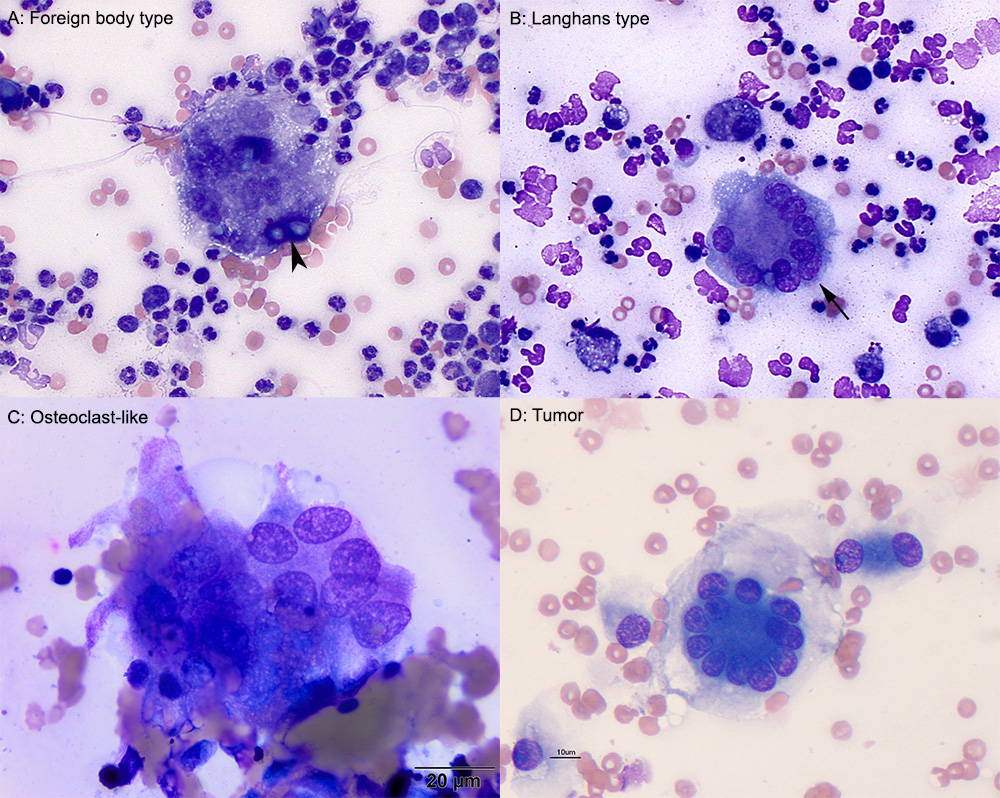 A: Foreign body type giant cells have haphazardly arranged nuclei, which can show mild to moderate intracellular anisokaryosis. Nuclear chromatin is coarse to ropey and nucleoli are usually indistinct. The cells usually contain vacuoles (presumed phagolysosomes or phagocytized lipid), phagocytized intact cells (e.g. erythrocytes, neutrophils), or debris from degrading cells in their cytoplasm. Variants may not be vacuolated or phagocytic, but still have similar nuclear arrangements and features. They can be accompanied by neutrophils (pyogranulomatous inflammation) or occur alone (granulomatous inflammation). In this aspirate, intracellular broad-based budding yeast, compatible with Blastomyces, are seen within the giant cell (arrow, 50x objective). B: Langhans type giant cells are seen under inflammatory conditions (similar to foreign body giant cells) and have nuclei arranged in a semicircle around the periphery of the cell (arrow). Cytoplasmic and nuclear features are similar to a foreign body type giant cell. This cell was observed in an aspirate from a dermal mass under a dog’s eye (50x objective). C: An osteoclast-like giant cell
(OCLGC) contains haphazardly arranged round to slightly oval uniform nuclei (mild intracellular anisokaryosis) with lightly stippled to lacey chromatin and typically single small nucleoli. The cells have a pink grainy cytoplasm and pink-purple variably sized granules may be seen in some variants (not shown). This OCLGC was from the current case (100x objective). D: A tumor giant cell in an aspirate from a dog with a soft tissue sarcoma. The nuclei are arranged in a ring, so-called “crown-like” cells, which are typically associated with perivascular wall sheath tumors. Other tumor giant cells may show striking features of malignancy, which are lacking in this cell. Note, this is not a touton giant cell (inflammatory) because it lacks the peripheralized foamy cytoplasm and is tumor versus histiocytic or myeloid-derived (100x objective). 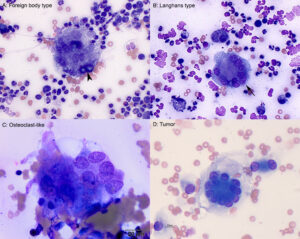