The sediment smears prepared from the fluid were highly cellular and composed of approximately 83% non-degenerate neutrophils and 17% macrophages, indicating suppurative to mixed inflammation and an exudative effusion (Question 1, Figure 2 on first page and annotated Figure 3 below). The macrophages were variably vacuolated and frequently contained a few to many non-staining slender bacterial rods, indicating an infection with Mycobacterium species (Question 2, Figures 3-4 below). The bacteria were rarely seen within neutrophils (Figure 3 below).

The cat was hospitalized and additional clinical pathologic tests, including a complete hemogram, biochemical profile, and urinalysis, were performed. Hemogram results showed a mild normocytic normochromic nonregenerative anemia (hematocrit, 27%, RI: 31-48%; absolute reticulocyte count, 31 thou/L, RI: 9-61 thou/μL) and an inflammatory leukogram, characterized by a moderate leukocytosis (white blood cell count, 29.6 thou/μL, RI: 5.1-16.2 thou/μL) due to a moderate neutrophilia (27.0 thou/μL, RI: 2.3-11.6 thou/μL) and mild left shift (bands 1.8 thou/μL, RI: 0-0.1 thou/μL). Neutrophils were mildly toxic. The cat had a concurrent mild lymphopenia (0.5 thou/μL, RI: 0.9-6.0 thou/μL), which could be due to endogenous corticosteroids (stress) or inflammation. A few reactive lymphocytes indicated antigenic stimulation. Low numbers of endogenous Heinz bodies (indicating mild oxidative injury to erythrocytes) were noted on blood smear examination. The anemia was attributed to inflammatory disease. The biochemical panel showed evidence of inflammation and muscle injury, with a moderate hypoalbuminemia (1.7 g/dL, RI: 3.2-4.3 g/dL), mild hypoferremia (36 μg/dL, RI: 59-169 μg/dL), mildly decreased total iron-binding capacity (211 μg/dL, RI: 222-423 vg/dL) and iron saturation (17%, RI: 20-56%) , and high muscle-associated enzyme activities, including CK (443 U/L, RI: 74-386 U/L), aspartate aminotransferase (AST, 134 U/L, RI: 17-48 U/L) and lactate dehydrogenase (LDH, 1066 U/L, RI: 71-406 U/L), respectively. A liver source for the increased AST and LDH activities cannot be excluded. A mild total hypocalcemia (8.0 mg/dL, RI: 9.0-11.3 mg/dL) was attributable to the hypoalbuminemia. The cat also had a moderate hypocholesterolemia (79 mg/dL, RI: 101-323 mg/dL), which could be due to macrophage activation and increased consumption of cholesterol or abnormal cholesterol metabolism as a consequence of the infection. Human patients with pulmonary tuberculosis frequently have low cholesterol concentrations, which may be a negative prognostic indicator.1 Abnormal findings on the cat’s urine on urinalysis were a mildly increased protein concentration (100 mg/dL in a urine with a specific gravity of 1.035, pH 6.5). The proteinuria could be due to disease-associated changes in the glomerular filtration, with leakage of albumin, or tubular damage. The hypoalbuminemia was too severe to attribute to inflammation alone, supporting additional causes for this abnormality, such as increased catabolism and, potentially, mild glomerular loss. The initial metabolic acidosis appeared to be due to bicarbonate loss, likely through the kidneys from proximal tubular injury (the acidic pH in the urinalysis suggests that the distal tubules were capable of excreting hydrogen). A concurrent L-lactic acidosis from the hypovolemia or altered cellular metabolism was possible. The initial mild hyperkalemia may be due to decreased renal excretion secondary to the effusion,2 although the exact mechanism responsible for the hyperkalemia is unknown. 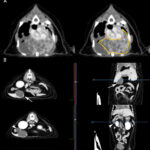 A computerized tomography (CT) scan of the thorax and abdomen was also done. The CT showed a cavitated thoracic mass which dorsally displaced the lungs, heart, and caudal vena cava (Figure 5). Multiple lung and pleural nodules were noted. Multifocal masses were noted in abdominal organs, including the pancreas and liver (Figure 5).

The soft tissue surgery service was consulted for a possible thoracotomy to remove the lung mass. They advised against a thoracotomy due to the highly cavitated nature of the mass as well as extensive involvement of the surrounding vasculature. The cat’s owners elected for humane euthanasia due to the poor prognosis but permitted removal of a section of the lung mass (presumptive granuloma) post euthanasia. The mass was submitted for polymerase chain reaction (PCR) testing for mycobacterial species via amplification of 16S RNA and speciation via Sanger sequencing at the United States Department of Agriculture National Veterinary Testing Laboratory in Iowa. Initial PCR testing confirmed a mycobacterial infection and sequencing of the rpoB genes revealed an infection with Mycobacterium (M.) avian subspecies hominissuis.

The genus Mycobacterium are a diverse group of bacteria, consisting of pathogenic and non-pathogenic organisms. They are mainly found in the environment (typically soil and water), a few which are opportunistic pathogens, including species within the M. avium complex (MAC), with low numbers of obligate pathogens that affect animals and humans, such as M. tuberculosis.3 They are intracellular, acid-fast and gram-positive, slow-growing bacilli4 with characteristic negative staining in modified Wright’s-stained cytologic specimens. The lack of staining is attributed to a thick hydrophobic peptidoglycan-mycolic acid cell wall that prevents stain penetration. They are also difficult to identify in histologic specimens, without the use of acid-fast stains, such as Fite Faraco or Ziehl-Neelson.

Tubercle bacilli enter the body through respiratory or alimentary routes or via skin penetration. A primary complex (Gohn complex) forms from local multiplication at the initial site of entry and the draining lymph node, followed by granuloma formation at both sites. In many cases, the bacteria may be restricted to these sites by the immune system, with subsequent resolution of infection. Persistent focal or disseminated disease is suggestive of defective cell-mediated immunity.4 The bacteria has evolved to evade host immunity, allowing entry and multiplication within macrophages, resulting in granulomatous inflammation.4 An acute inflammatory component or pyogranulomatous inflammation may be seen in some host species.3 Immune evasion mechanisms include the ability to avoid antimicrobrial peptides protecting the mucosal barrier, allowing for epithelial invasion, and interference with phagolysosome formation and function, including resistance to reactive oxygen- and nitrogen-based killing mechanisms.5

Clinical laboratory findings in cats with mycobacterial infections are non-specific and include a non-regenerative anemia, neutrophilic leukocytosis, and hyperglobulinemia, the first two of which were seen in this case. A free ionized hypercalcemia can be seen in low numbers of animals,11 presumably due to vitamin D secretion by macrophages. Lesions noted on diagnostic imaging of the thorax include pulmonary masses, an interstitial or bronchointerstitial pulmonary pattern, tracheobronchial or hilar lymphadenopathy, calcified granulomas forming diffuse radiopaque densities, and pleural/pericardial effusions. Abdominal imaging may show splenomegaly, hepatomegaly, solitary masses, mesenteric lymphadenopathy, and peritoneal effusion.6 Osteolytic bony lesions or, infrequently osteoproliferative changes, may be present in systemic infections.16

Mycobacterial infections are frequently diagnosed on cytologic examination of smears of aspirates, therefore fine needle aspiration is a rapid and reliable diagnostic tool. Organisms are identified by their characteristic negative appearance and can be slightly refractile, which also facilitates their identification. They can also be seen intracellularly in leukocytes in fluid from body cavity effusions and we have observed the organism within neutrophils and monocytes in peripheral blood of infected cats. Bacterial numbers in cytologic specimens can vary, depending upon the infecting species and host response.16 Low numbers of organisms can be missed and if there is an index of suspicion for mycobacterial infection (e.g. granulomatous inflammation) in susceptible species, acid-fast stains can be done on cytologic specimens.

Bacterial culture from fresh tissue is the reference standard for diagnosis. Genetic testing via PCR testing for 16S RNA is recommended if culture fails to grow the organism.16 Sanger sequencing of bacterial genes, particularly the rpoB gene, is recommended for accurate speciation and was done in this case. An interferon-gamma (IFN-γ) release assay (IGRA) is being used as a non-invasive immunological research tool for diagnosing mycobacterial infections in the United Kingdom.7,11,17 The test, which was first developed to detect bovine tuberculosis in Australia,18 evaluates the secretion of IFN-γ by effector T cells in response to various mycobacterial antigens, which are added to isolated peripheral blood mononuclear cells ex vivo. Secreted IFN-γ is measured with an ELISA assay using feline recombinant IFN-γ to create a standard curve.7 The IFN-γ concentration is believed to be proportional to the antigen or bacterial load. The IGRA is highly specific and more sensitive than conventional intradermal TB testing in cattle with TB.18 In cats, IGRA sensitivity varies depending on the infecting mycobacterial species, with higher sensitivity in cats that are culture positive for M. bovis (90%, n=10) than M. microti (83%, n=12) in one study. Unfortunately, the applied antigens did not detect infection with non-TB species, such as M. avium,7 indicating that the test would not be useful in countries in which fewer infections are caused by TB-related mycobacterial species, like M. bovis or M. microti. A small study of 18 cats suggests that the IGRA is not useful for monitoring response to therapy.11 Rapid antibody-based tests are also useful for diagnosis of feline TB-related mycobacterial infections, but may be less sensitive than the IGRA, and also do not detect infection with non-TB mycobacterial species.7

Treatment of mycobacterial infections in cats is difficult and typically involves using a combination of 2-3 antibiotics, such as rifampicin, azithromycin and pradafloxacin, for several months.6,11 Surgery is recommended for local skin lesions or solitary internal lesions that can be resected. Disseminated infections respond poorly to treatment. The prognosis depends upon the mycobacterial species involved and severity of disease. Local skin lesions carry a guarded to good prognosis while disseminated infections usually carry a poor prognosis.6,16

Certain mycobacterial species, including M. tuberculosis and M. bovis, carry a potential zoonotic risk while others, such as M. lepraemurium, do not.6 There are specific risk factors that can increase susceptibility to infection in people. These factors include young age (<5 years old), pregnancy, and known risk factors for immunosuppression, such as human immunodeficiency virus infection, organ transplantation, chemotherapy, systemic corticosteroid therapy and diabetes mellitus, cystic fibrosis or kidney disease.19 Hypocholesterolemia is an additional hypothesized risk factor,1 but it is not know if this laboratory abnormality is a cause or consequence of the disease. It is important to discuss the potential of zoonosis with owners when a mycobacterial infection is suspected or diagnosed in a veterinary patient.

Acknowledgment: The author would like to thank Dr. Amy Todd-Donato for assistance with interpretation of the images.