Pleural fluid from a cat

A 13-year-old neutered male Domestic Shorthair was presented to the Cornell University Hospital for Animals for a 2-day history of increased respiratory rate and effort, inappetence, and constipation. The cat was housed indoors and had no known history of trauma. He was diagnosed at a young age with cerebellar hypoplasia and was recently found to be hyperthyroid. On presentation, the cat was weak, had cerebellar ataxia, and was laterally recumbent for the physical examination. Heart sounds were muffled bilaterally and the cat had markedly increased inspiratory effort with abdominal press and tachypnea. He was 5% dehydrated, with diffuse muscle wasting, and a palpable thyroid slip. 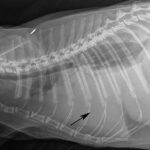 A pleural fluid sample was collected and submitted for cytologic analysis. The fluid was light yellow and opaque with a total protein concentration by refractometer of <2.5 g/dL and a nucleated cell count of 17.5 thou/uL. Examine the representative images of sediment smears of the fluid (Figures 2-4) and answer the questions.

Answers on next page