Direct smears of aspirates from both regions of the mass were similar. They contained many anucleated keratinized squamous epithelial cells, many of which had distinct nuclear outlines (‘ghost’ cells), and moderate macrophages, with numerous binucleated and multinucleated forms, some of which contained over 30 uniform nuclei (Figures 1-4)  (Question 1). There were also a few hemosiderophages (not shown), indicating hemorrhage, and individual and aggregates of spindle cells (presumptive fibroblasts, suggesting fibroplasia) (Figure 4). Since ‘ghost’ cells originate from the hair bulb (matrix cells), their presence indicated the mass had arisen from the hair follicle and was a hair follicle tumor or cyst (Question 2). A hair follicle tumor was favored based on the steady growth and large size of the mass, however no epithelial linings were seen to cytologically confirm a tumor diagnosis. The granulomatous inflammation was attributed to keratin behaving as an endogenous foreign body. 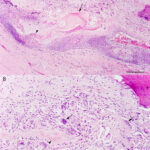 The mass was surgically excised, fixed in formalin, and submitted for histopathologic examination. Histopathologic examination of smears of the formalin-fixed paraffin-embedded sections of the mass revealed a well-demarcated, unencapsulated, expansile, multilocular, cystic mass. The mass consisted mostly of a large central cyst, with anastomosing epithelial trabeculae and cords, forming smaller daughter cysts. Cyst walls were lined by epithelia, which recapitulated matrical, isthmical, and infundibular hair follicle regions, and were surrounded by multinucleated giant cells and epithelioid macrophages in a fibrous stroma. Cysts contained lamellar and amorphous keratin and ‘ghost’ cells, with multifocal dystrophic mineralization and osseous metaplasia (Figure 5). Dense granulation tissue with hemosiderophages and perivascular lymphoid nodules surrounded the mass. The histologic diagnosis was a trichoepithelioma with a foreign-body inflammatory response.

Hair follicle tumors, of which there are several different types, are usually benign cutaneous tumors that form keratin-filled cysts lined by epithelium displaying differentiation towards one or more segments of the hair follicle. The normal hair follicle consists of 3 segments – the bulb, isthmus, infundibulum. The hair bulb is the deepest part of the follicle and contains matrix (matrical) cells, which give rise to all sections of the hair follicle, including the inner and outer root sheath and hair shaft. The cytoplasmic content of the sheath cells helps differentiate them into inner (containing red trichohyalin granules) and outer (vacuolated appearance due to glycogen content) sheath cells. The matrical cells can abruptly keratinize into lamellar keratin. The middle section of the follicle (extending from the bulb to the duct of surrounding sebaceous glands) is the isthmus and consists of small cells with pale pink cytoplasm, which produce amorphous keratin. The section of the hair follicle that is closest to the surface of the skin is the infundibulum, which is recognized by a granular layer (cells containing blue keratohyalin granules). Amorphous keratin is also produced from this region.1,2

The main types of follicular tumors which have keratin-containing cysts are trichoepitheliomas, infundibular keratinizing acanthoma, and pilomatricoma. These are differentiated by the types of cells forming the tumor and lining the cysts and nature of the formed keratin. Trichoepitheliomas consist of small basilar epithelial cells arising from the hair bulb (matrical cells). The cells form trabecular clusters, ribbon-like arrangements and islands, with palisading nuclei on the outer edges, and line the walls of variably sized cysts containing keratin. The keratin can show features of abrupt formation, with ‘ghost’ cells. Some cysts can be lined by cells showing features of other sections of the hair follicle, including the inner or outer root sheath, however most consist of basilar cells. The presence of epithelium from all regions of the hair follicle in cyst linings is a feature of trichoepitheliomas and helps distinguish this from the other follicular tumors. Infundibular keratinizing acanthomas typically consist of a central epithelial-lined cyst lined by cells with pale pink cytoplasm (similar to cells from the isthmus) with a small or minimal granular layer. The cyst usually has a pore connecting to the overlying dermis and can contain smaller secondary or daughter cysts. Pilomatricomas consist of multiple cysts lined by basilar matrical cells, which abruptly keratinize forming masses of lamellar keratin and ‘ghost’ cells. There may be numerous mitotic figures. Mineralization of keratin and granulomatous inflammation is commonly seen.  With all these tumors, the cells and cysts can be embedded within a small to moderate amount of fibrous stroma (minimal stroma is typical of pilomatricomas), which can be mucinous or hyalinized. Inflammation (suppurative, pyogranulomatous or granulomatous) can occur secondary to release of inflammatory keratin into surrounding tissue. It is difficult to distinguish between trichoepitheliomas and pilomatricoma as both are comprised of basilar matrical cells, which form ‘ghost’ cells and lamellar keratin, which may contain melanin. Pilomatricomas tend to more frequently show keratin mineralization and granulomatous inflammation, contain higher numbers of ‘ghost’ cells, have larger cysts, and cysts are not lined by cells with isthmical or infundibular features (a feature that would not always be evident in aspirates of these tumors). They also contain larger and fewer numbers of cysts with ‘sheets’ versus small rafts of ‘ghost’ cells. Metaplasia is seen in the stroma of infundibular keratinizing acanthomas (cartilage and bone) and pilomatricoma (osseous metaplasia). These skin tumors are usually benign, but malignant versions do occur and are differentiated from their benign counterparts by necrosis, increased mitoses, atypical mitoses, invasive growth, schirrous reactions, and tumor cells in cutaneous vessels.1,2 It was difficult to determine the exact type of hair follicle tumor in this case, because the tumor showed features of a trichoepithelioma (cyst walls resembling isthmical, infundibular and bulbar follicular epithelium, more abundant stroma) and pilomatricoma (osseous stromal metaplasia, granulomatous inflammation, large sheets of ‘ghost’ cells, larger central cyst). Unfortunately, staining for cytokeratin 15 would not help differentiate between these tumors because matrical cells would express this marker in both a trichoepithelioma or pilomatricoma.2 Due to the presence of  various follicular epithelial linings, a diagnosis of trichoepithelioma was favored. Granulomatous inflammation and osseous metaplasia may have been due to chronicity of the lesion.1 The tumor did not show features of malignancy, compatible with the long clinical history.

Follicular tumors are most common in dogs, with an incidence of 0.4 to 4%.1,2 Cytologic diagnosis of follicular tumors is usually accomplished by the presence of the basilar cells with keratin, particularly the finding of  ‘ghost’ cells, which are characteristic of bulbar epithelium. The latter indicate the presence of a cyst or tumor arising from the hair follicle, with differential diagnoses of hybrid (containing epithelial cells from 2 or more regions of the follicle), infundibular, or matrical cysts, trichoepithelioma or pilomatricoma.1-4 However, epithelial lining cells may be seen in aspirates from cysts and cannot reliably distinguish between a follicular cyst or tumor.4 Of these lesions, only follicular hamartomas, hybrid cysts, solitary or multiple trichoepitheliomas, and a single pilomatricoma have been reported in camelids.5-8 ‘Ghost’ cells were not identified in cytologic smears of the discharge from hybrid cysts in 3 camelids in one report;3 however, infundibular-isthmus cysts are the most common type of hybrid cyst and these may contain a few nests of ‘ghost’ cells, as may matrical cysts.1,2 Cytologic differentiation between a follicular cyst or tumor was not possible in this case due to the absence of epithelial cells4 and the definitive diagnosis required histopathologic evaluation of the excised mass, with identification of the characteristic epithelia and keratinization patterns.1,2