Neutrophils are produced in bone marrow, released into blood after completing their maturation in marrow, circulate for less than a day (5-15 hours), and migrate out of the vessels into tissues or into alveoli and gut lumen. Effete neutrophils (that have finished their lifespan) undergo apoptosis and are removed by macrophages, in a process called efferocytosis (Duffin et al., 2010). While circulating, neutrophils are distributed between large vessels (neutrophils here form the circulating neutrophil pool or CNP; these are the neutrophils in the usual blood sample) and small vessels (neutrophils here form the marginating neutrophil pool or MNP). The total body neutrophil pool or TNP comprises the CNP, MNP, and the pool of post-mitotic neutrophils in marrow. The ratio of neutrophils in the MGP to CGP is about 1:1 in most species, except for cats, which is up to 2-3:1.  Alterations of the MGP:CGP ratio will cause changes in the number of neutrophils sampled during blood collection, and contribute to changes in the CBC neutrophil count seen from certain substances such as epinephrine, corticosteroids and endotoxemia. With a decrease in marginating pool, we could expect to see a 1 fold increase in neutrophils (e.g. 2x upper limit of the reference interval) in most species, except for the cat, where we could see a 2-3 fold increase.

Terminology associated with neutrophil changes (proportions of mature/segmented or immature/band neutrophils) can be confusing. For more information on this, please refer to leukogram patterns for useful tips and a guideline table. 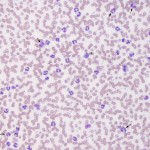 Neutrophilia is an increased numbers of segmented or mature neutrophils (absolute numbers not percentages), and can occur due to the following mechanisms, the most common of which is corticosteroids, epinephrine and inflammation (increased production and release from bone marrow).

Common causes of neutrophilia include inflammation (either infectious or non-infectious [trauma, surgery, burns, etc.]), exogenous or endogenous corticosteroids, and epinephrine. Immune-mediated diseases such as immune-mediated hemolytic anemia are also commonly associated with neutrophilia due to actions of inflammatory cytokines. A neutrophilia is a feature of several different leukogram patterns, including an inflammatory leukogram, stress leukogram, and physiologic leukocytosis. Strenuous exercise in horses, whether associated with extreme stress (Schalm’s Veterinary Hematology, 4th edition) or training (Rose et al 1983), can cause an increase in neutrophil counts. In one study of 16 unbroken Quarterhorse yearlings, the neutrophil count ranged from 3,700 to 14,400/uL, immediately after being caught. Most of the caught horses had a lymphocytosis (>4,600/uL) (Schalm’s Veterinary Hematology). Over 6 weeks of training, the average neutrophil count increased from around 3,500 to around 5,300/uL after exercise and was within baseline 30 minutes post recovery (Rose et al 1983). In another study of racing horses, the average neutrophil count did not change within 10 minutes after racing (Snow et al 1983). In both of the latter two training studies, an increase in lymphocyte count and PCV were more consistent findings.

Neutropenia is decreased numbers of segmented neutrophils (absolute numbers not percentages), and can occur due to opposite mechanisms to those that cause neutrophilia. The most common cause is severe inflammation (increased movement into tissue), particularly when there is evidence of neutrophil immaturity (toxic change and a left shift or increased band forms).

Small, mature lymphocyte are the most common lymphocyte in peripheral blood. Lymphocytes can be the most numerous cell type in certain animal species, including cattle and rodents. In dogs, cats, horses, and camelids, they are outnumbered by segmented neutrophils in health. In cattle, they are frequently seen in a 1:1 ratio or even less with neutrophils. Most lymphocytes are smaller than a neutrophil, although there may normally be small numbers of intermediate to large lymphocytes, especially in cattle where up to 50% of lymphocytes can be intermediate in size. We size lymphocytes based on neutrophils (which are more regular in size across species, compared to RBC).  With this sizing, we use the size of the nucleus, not the entire cell (since some cells with more cytoplasm than normal would be mistakenly identified as large). 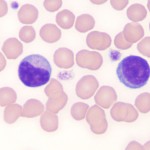 Lymphocytes, unlike the other leukocytes, are produced in lymphoid tissue rather than in the bone marrow. Most of the lymphocytes in blood are long-lived cells that recirculate between blood and tissue. Changes in blood lymphocyte number usually reflect changes in distribution rather than changes in production or loss.

Lymphocytosis, which indicates an increase in absolute numbers not percentages of lymphocytes, can be seen in the situations given below. The most common causes are a physiologic (epinephrine-mediated) or age-related lymphocytosis.

Lymphopenia is due to a decrease in absolute numbers not percentages of lymphocytes. There are several causes, the most common of which is endogenous corticosteroids (stress leukogram).

Monocytes share a common committed stem cell with neutrophils. They are produced in marrow, circulate briefly in blood, and migrate into tissues where they differentiate further to become macrophages. There is no storage pool of monocytes in marrow; their numbers in marrow at a given time are very small. Monocytes in blood are unevenly distributed between a marginated and circulating pool. Corticosteroid affect differs among species. Factors produced at sites of inflammation can increase monocyte production.

Common causes of monocytosis, which indicates an increase in absolute numbers not percentages of lymphocytes, are:

Monocytopenia may be difficult to document because monocyte reference intervals often go down to zero, and has no clinical significance.

Eosinophils are produced from the common myeloid progenitor in bone marrow, which differentiates to eosinophils under the influence of eosinophilopoietic cytokines, such as interleukin-5.

Eosinopenia is a decreased numbers of eosinophils (absolute count not percentages). It may be difficult to document because the eosinophil normal range may go down to zero. Eosinopenia is most commonly attributed to increased corticosteroids (stress leukogram) but can also be part of acute inflammation, particularly that due to bacterial sepsis, where it is not attributable to stress or increased cortisol (Bass 1975, Bass 1977, Bass et al 1980, Davido et al 2017). The mechanism of eosinopenia is unclear but could be due to margination or egress of eosinophils into tissues in response to a chemotactic stimulus. An eosinopenia has also been documented in COVID-19 patients with severe SARS-CoV-2 infection and could be due to inflammation in this condition as well (Cazzaniga et al 2021, Le Borgne et al 2021). 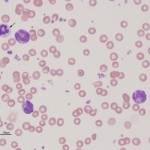 Basophils are also produced from the common myeloid progenitor, however the cytokines involved in basophil differentiation are poorly understood. It is also uncertain whether basophils and mast cells (which look very similar in some species) originate from the same or a different hematopoietic precursor.

Increased absolute numbers (not percentage) of basophils (basophilia) is a relatively rare finding, which usually occurs in association with eosinophilia. Basophils without eosinophils can be seen in chronic myeloproliferative disease, such as chronic myeloid leukemia and essential thrombocythemia (chronic platelet leukemia). Basophilic leukemia has also been rarely reported in animals.

Since most healthy animals have no basophils in blood, the reference interval usually includes zero basophils, therefore basopenia is not a relevant finding. 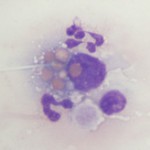 Erythrophagocytic histiocyte in blood of a dog with IMHA

Histiocytes is an umbrella term comprising monocyte-derived macrophages and dendritic cells. All of these cells are derived from a common myeloid progenitor in the bone marrow and are antigen-presenting cells. These cells are not normally in blood, but cells resembling macrophages (eccentric round nuclei, abundant vacuolated cytoplasm, phagocytic activity) can be seen in blood in both reactive and neoplastic conditions. Reactive conditions include inflammation, immune-mediated hemolytic anemia (erythrophagocytosis may be seen in the cells or some may contain iron if there is intravascular hemolysis), and infectious agents (e.g. systemic mycoses like histoplasmosis and protozoal infections, such as Cytauxzoon). In some of the latter cases, the causative organism may be observed within the cell (and potentially neutrophils as well, since neutrophils can also be phagocytic). Histiocytes or macrophages can also be observed in blood in histiocytic and non-histiocytic neoplasia, such as lymphoma and hemangiosarcoma. Large numbers of histiocytes, particularly those with abnormal nuclear features, should raise suspicion for underlying histiocytic sarcoma or dendritic leukemia (a rare variant of leukemia) (Allison et al., 2008). Macrophages can also be an artifact of storage (monocytes can become activated over time in vitro and resemble macrophages). 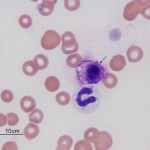 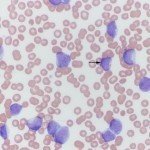 At Cornell University, we generally use the term “blasts” to describe cells in blood that we are not certain of their lineage, i.e. they could be myeloid or lymphoid. The reason we cannot determine their lineage is because they are immature cells that lack or show few features of differentiation down a particular lineage. The presence of blasts in blood indicates a leukemia. The term usually applies to mononuclear cells in blood which have fine chromatin (lots of euchromatin or a cell that is transcribing DNA actively) and small amounts of cytoplasm (high nuclear to cytoplasmic ratios). They may or may not have nucleoli (these may not be obvious in Wright’s-stained smears, so nucleoli do not make or break a “blast”).  The cells are usually large (the nucleus is bigger than a neutrophil), but some blasts have nuclei that are the same size as neutrophils and are much harder to distinguish from normal lymphocytes in blood. Although we use various cytologic features (e.g. presence or absence of cytoplasmic granules, nuclear shape), along with hemogram findings (presence or absence of cytopenias), to presumptively identify the cell lineage of blasts (myeloid or lymphoid), these features alone cannot reliably determine cell lineage. Additional testing (immunophenotyping, cytochemistry) is usually required for determination of cell lineage. At Cornell University, we place “blasts” in the “OTHER WBC” category (if there are sufficient numbers to be counted in a differential leukocyte count). We do not usually code reactive lymphocytes in this category, but rather indicate their presence by adding a comment or semi-quantification to the WBC exam part of our hemograms.

It is also important to distinguish blasts from large reactive lymphocytes, which can really mimic each other. Again, we use various findings, including clinical signs, hematologic results, cytologic features of the cells, to help make this determination (i.e. everything is context- or case-dependent). In some cases, we cannot distinguish between “blasts” and reactive lymphocytes. In such cases, evaluation of the patient for evidence of cancer or serial monitoring of the patient will be needed to help with this distinction.